How when Mumbai Indians catch a cold, Team India sneezes

With six key players from the IPL in the WorldT20 squad, the fortunes of the two teams are entwined. Suryakumar's form, Hardik's fitness and the inconsistency of Rohit and Ishan aren't just a headache for the most-successful IPL franchise. 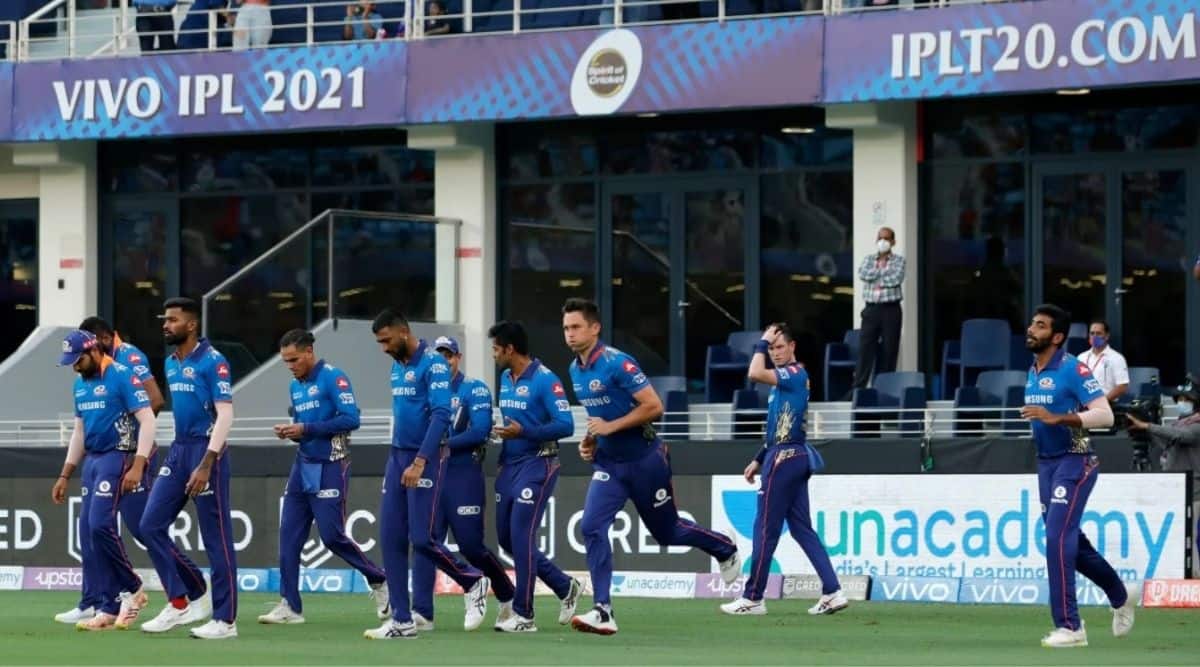 Since national teams tend to pick most of their eggs from one particular basket, their rosters often consist of players from the domestic league’s best team (IPL)

Rohit Sharma strides out to bat in a blazing blue jersey with the No 45 imprinted boldly on its back. But for the splashes of gold-colour on his jersey, or a thicker gradient of blue, you could not distinguish whether he is turning up for his club, or the country, whether he is in the middle of a World Cup or an IPL game. So it is for five of his teammates—Jasprit Bumrah, Hardik Pandya, Ishan Kishan, Suryakumar Yadav and Rahul Chahar.

Since national teams tend to pick most of their eggs from one particular basket, their rosters often consist of players from the domestic league’s best team. It brooks no argument that Mumbai Indians have been the most prolific team in the IPL, even if this season has panned out indifferently. Therefore, their imprint on the Indian team is unshakeably strong—the influence not restricted to the numbers, but to their indispensability.

All of them wield important portfolios, and pertinently, the same one they handle for club and country. So Bumrah opens the bowling, Sharma the batting, the tempo-setters; Yadav walks in at No 4 as the destroyer-consolidator, Pandya at No 6, as the finisher. If Chahar gets a game, it would be as the attacking wrist-spinner, not in a defensive role; if Kishan gets a game, he would be expected to tee off from the first ball. Their country-club roles blend imperceptibly.

It’s not hyperbolic, hence, to state that their fortunes are as much as entwined as they are interlinked. A well-tuned Mumbai Indians means an in-sync Team India. Contrarily, an out-of-tune Mumbai Indians correspond to a jarring Team India. When Mumbai Indians catch a cold, India sneezes. It’s like the age-old electoral truism of the country—the national polls would swing where Uttar Pradesh sways to.

So, like the local politics of India’s most populous state, the fortunes of India will hinge, majorly, on how Mumbai Indians’ personnel fare. Their strengths are India’s strengths too—the red-hot form of Bumrah should please the staunchest MI-critics (by the way, who does not love Bumrah?)—just as their travails are India’s too, their concerns are those of India’s as well.

For instance, the plummeting form of Yadav is not only a headache for his club, but also for his country. In 13 innings this edition, he has doled out only 235 runs at an average of 18 and a strike rate of 129.83. His figures in the Emirates, the same venue for the World Cup, is sorrier—his six outings yielding just 62 runs, scored at an ODI-par strike rate of 79. Last year, at this stage, he had tallied nearly twice as many runs (480) at a significantly better strike-rate of 145. His auditioning to the national team went smoothly—he prospered in the tour of Sri Lanka—but his form in the prelude to the World Cup would be evaluated on the runs he has made in the UAE instalment of the league.

His shoddy form has been one of the primary reasons Mumbai Indians are clutching at the straws to qualify for the playoff. They have, often, plateaued in the middle-overs, where once Yadav used to turbocharge them with his classically aggressive stroke-play. To a lesser extent, Sharma’s form in the UAE too has been disconcerting. After his most productive Test series outside Asia, he has not quite strummed into his usual gears, his last outings breeding 111 runs, which is substandard by his high standards. But unlike Yadav, Sharma’s form is not a cause for alarm, because he is a proven problem-solver.

As a consequence, MI have struggled for momentum in the first 10 overs. But the resurgence of Kishan—who rollicked a 25-ball half-century against Rajasthan Royals—is a timely fillip. Kishan has looked reckless more than anything else, but rectified himself in the must-win Royals game, where he resisted his impulse to strike every ball out of the ground. He soaked the good balls (10 dot), and targeted boundaries only when the bowlers erred, mostly on the shorter side. Should he sustain his form, both MI and India will be better served as well as relieved, more as India’s batting backup appears thin on paper. Take out the top three—Sharma, KL Rahul and Kohli—there are few established names, few proven performers in international cricket. The nightmares of the 2019 World Cup and 2017 Champions Trophy could recur.

MI’s Hardik Pandya in action during an IPL match. (File)

Similarly, MI have vexed over Hardik Pandya’s inability to bowl. True that he has made sporadic impact with the bat, like 40 not out in the nervy chase against Punjab Kings, and he could be an able finisher, his bowling brings an altogether different dimension to the team. Not only is he an excellent white-ball bowler, his assortment of cutters and seam-manipulation could make him deadly on the sluggish decks of the Emirates, but also he gives the team management the room to manoeuvre with combinations. He affords the option to squeeze in an extra specialist, be it a batsman, spinner or seamer.

But his persistent niggles, aches and strains have hamstrung both the club and country. Had he been bowling-fit in England, India could have included an extra batsman, or played with two spinners. Likewise, MI needn’t have played both Jimmy Neesham and Nathan Coulter-Nile, which meant they had to bench Quinton de Kock, as both Trent Boult and Kieron Pollard are undroppable overseas players. Balance-wise, he is the most valuable asset for Indians as well as India.

Like Pandya, Chahar too has polarised opinions. His plunge in form has coincided with Yuzvendra Chahal’s revival, sparking intense debates.

Therefore, no other team’s fortune and form would have a bearing on the national team’s performance as much as that of Mumbai Indians. Should Sharma and Yadav reacquaint with their elusive touch, should Pandya start to bowl and Chahar retrieves the mastery of control, both the India and Mumbai Indians could hope to wrap up their immediate assignments on a high. A happy and winning Mumbai Indians could result in a happy and winning Team India. Their fate is as interlinked as it is entwined, as if they hold a mirror to each other.

The UAE leg has not been the most productive for many MI players, who would also feature for India in the T20 WC. A quick ride through their form and numbers in the UAE

The opener had a couple of starts in the first two games, but as the pitches have slowed down, so has Sharma. In the last three games, he has only eked out 37 runs, but importantly has not looked out of touch, but rather out of runs.

The swashbuckling southpaw was prone to self-destructing in the UAE phase, but the breezy half-century against Rajasthan Royals should get him going. Both MI and India would hope that he is peaking just at the right time.

MI’s hero of 2020 showed glimpses of form in his 33 against Delhi Capitals, where he looked assured against the extreme pace and verve of Andre Nortje and Kagiso Rabada. But he has, strangely, looked vulnerable against the spinners.

The 40 not out (off 30 balls) against Punjab Kings was a textbook finishing act. The match-winning knock aside, his influence has been negligible so far, apart from his lively fielding. And he has not bowled yet in the UAE.

The leg-spinner hasn’t adjusted to the pace of the sluggish pitches. He has often bowled faster than is required on these wickets, and messed up with his lengths. He is always bound to leak a few runs, but bargained wickets. Not in the last four games though

The pace spearhead has carried on his form in England to Emirates, adapting smoothly to the pitches. As always, he has been an irresistible force, producing breakthroughs at the ripest moment for his captain.