England vs West Indies (ENG vs WI) 2nd Test Day 2 Highlights: Roston Chase was the most successful bowler for the Windies.

England vs West Indies (ENG vs WI) 2nd Test Day 2 Highlights: England ended day two of the second Test in a commanding position after Sam Curran picked up the wicket of John Campbell at the fag end of the day. WI 32/1 trail by 437 runs, really have to work hard to get rid of the deficit.

Earlier, Dom Sibley furnished a splendid account of old-fashioned Test batting while Ben Stokes slammed a fine 176 to help England pile 464/9 dec. Roston Chase bagged his third fifer (5/172) in Test and was the most successful bowler for the Windies.

There was a bit of drama in the last over where Curran could have had another. He has Joseph absolutely plumb in front but it's a tough one to give with it brushing the bottom of the pad before hitting the bat. Had Root reviewed he would have been out. England's day! The Windies close on 32/1, the trail by 437 runs. Earlier, England declared on 469/9 after 162 overs of play. Stokes top-scored with a mammoth 176 while Chase took 5/172.

Sam Curran comes in and delivers the goods right away fro captain Joe Root. England get their first breakthrough as Curran traps Campbell between the wickets and sends him back to the pavilion on 12. Brilliant review by England too. WI are 16/1. 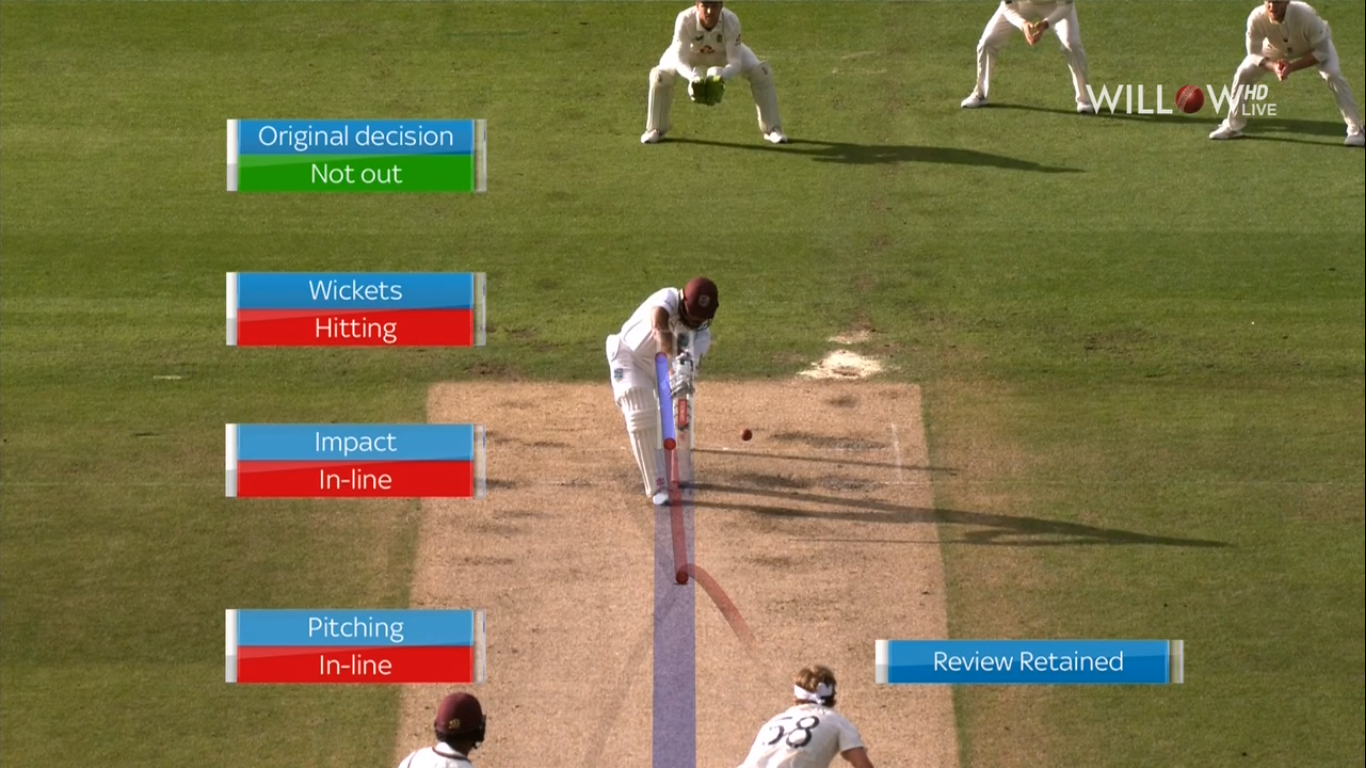 Chris Woakes gets a maiden over, but the West Indies batsmen are settling in nice and Slow. While Kraigg Brathwaite is on 4*, John Campbell is on 7*. WI are 11/0 after 6 overs. They trail by 458 runs.

Kraigg Brathwaite and John Campbell are at the crease. Kraigg Brathwaite is on strike. Stuart Broad will open the attack for England. A good start from the visitors, registering two singles. WI are 2/0 after the first over.

After 42 runs from the last five overs and a brilliant cameo by Dominic Bess (31* from 26 balls) which included three fours and one six, England have declared their innings on 469/9. England's total was hugely supported from the centurions, Stokes (176) and SIbley (120). On the other hand, West Indies' Roston Chase shined with the ball registering 5/172.

Oh my! What has Gabriel done?

Holder to Buttler, out Caught by Alzarri Joseph!! Big hoick across the line, doesn't time it very well.

Roston Chase to Sam Curran, out Caught by Kraigg Brathwaite! Curran spoons a reverse-sweep to backward point. Chase has a five-for. First West Indian spinner to do that at Old Trafford in over 70 years

Here we go after tea - England resume on 378/5, with Stokes 172* & Buttler 12. The admirable Roston Chase begins after tea, one wicket short of a 3rd Test five-for. He isn't a specialist off-spinner, but he's a very useful batting all-rounder.

Roston Chase claims two wickets, but England remains dominant through the afternoon, with Ben Stokes on 172* at tea. Will he accelerate further after the break?

Strange dismissal for Ollie Pope - he misses the ball by a mile and it gets trapped in between his legs. Pope's stay at the crease lasts just 8 balls and he is gone for 7. Fourth wicket for Roston Chase. ENG - 352/ 5 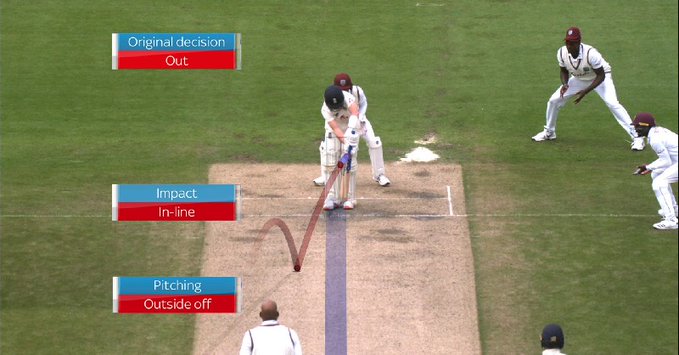 And West Indies have found their breakthrough finally! After 260 runs and two centuries, the partnership is broken as Roston Chase dismisses Sibley on 120. Roach with the catch, and on comes for England... Ollie Pope. ENG are 341/4.

Gabriel comes back for another spell, replacing Holder and it's the same story again. Stokes absolutely pastes him left and right with two boundaries and reaches 152*. While the first boundary came from a thick edge, the second one was about full control. He drove the delivery wide of mid-on, in the air and through the gap. ENG are 338/3 after 125 overs.

Stokes is on fire today and he seems unstoppable with the bat. After hitting the West Indies captain for a boundary just last over, he has again punished Holder with back-to-back boundaries. One through mid-on and another through mid-off. 10 runs from the over, and Stokes reaches his second-highest personal Test score of 140*. ENG are 325/3 after 123 overs.

England are completely in the driving seat of the Test, hitting 15 runs in the last five overs. Both Sibley (117*) and Stokes (128*) are in supreme control of their game with the bat and are easily keeping the likes of Holder and Chase at bay. Stokes punished Holder with a lovely shot towards the backward of square which goes for a boundary. The hosts are 309/3 after 121 overs. West Indies have to find a way to break the ever-growing 228-run partnership sooner rather than later.

Since 2018 Most Test Hundreds by English batsmen: 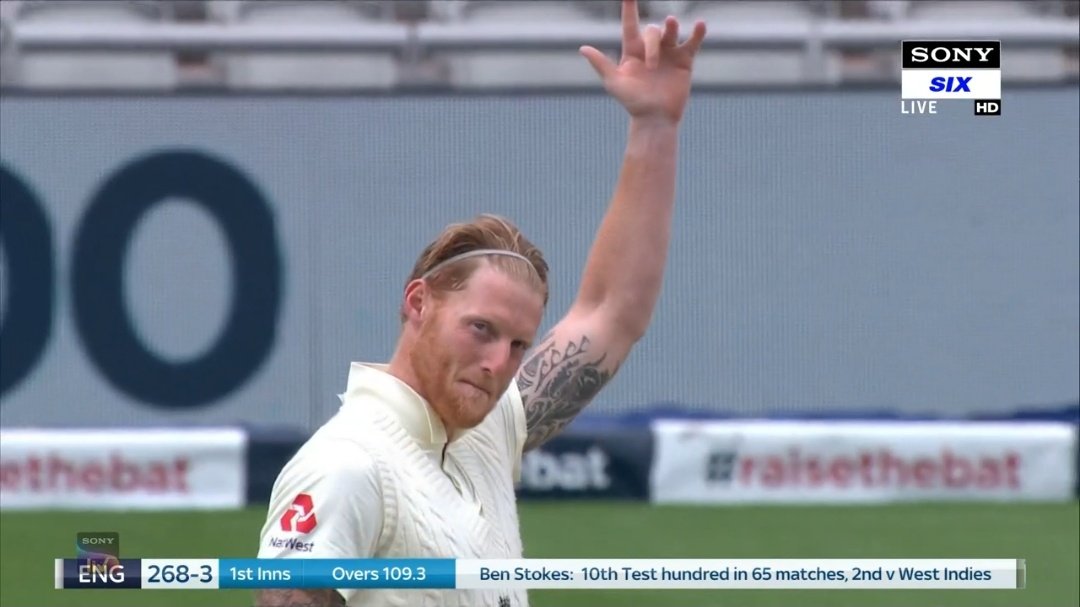 Stokes unbeaten on 99 at lunch

How refreshing to see a session of good old fashioned Test batting from two England players. Sibley took his time (312 balls) and got to his second Test century with a good-looking straight drive. Ben Stokes looks set to join his teammate soon as England continue to dictate terms.

Dom Sibley brings up his second Test century. Coming off 312 balls, it's England's slowest Test hundred since 2000. Dom Sibley has scored just five boundaries on route to his century. The last ENG batsman to make a ton with fewer boundaries was Graham Thorpe, against PAK in 2000 - who hit just one four.

"The concentration from Dom Sibley is extraordinary and impressive. I'm was one of Alastair Cook's great underrated strengths and I reckon it's an underrated skill for Test Match cricket," writes Rufus on Twitter.

If Dom Sibley reaches his century, it will *now* be his slowest first-class century, outdoing his 301 ball effort against Yorkshire, in Surrey colours back in 2013 - when he went on to make 242 (536).

Drinks: West Indies have decided to take the second new ball in hope of breaking the partnership between Sibley and Stokes that is on the verge of crossing 150 runs.