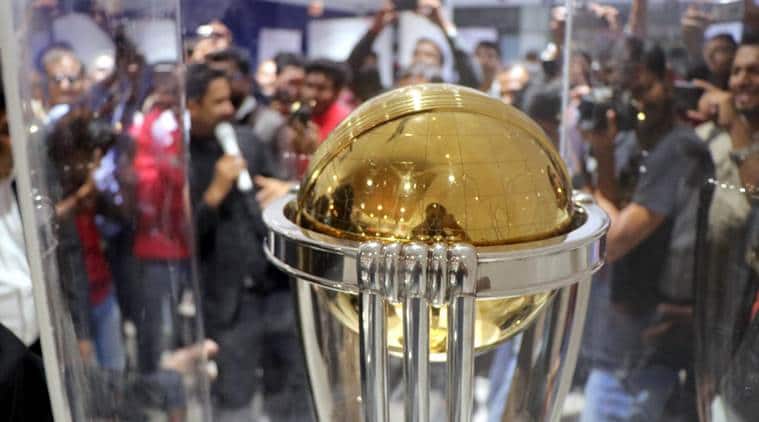 Cricket World Cup 2019 Teams, Squad, Players List: The ICC Cricket World Cup is scheduled to start from May 30, with hosts England locking horns with South Africa in the tournament opener. Team India will begin their campaign against South Africa on June 5, while defending champions will take on minnows Afghanistan in their opening fixture.

Unlike the previous editions, this time the World Cup will be played in a round-robin format, which means that all the participating nations will go head to head against each other. The format was last used in the 1992 World Cup, which was won by Pakistan.

Here are the details of all the 10 participating nations: 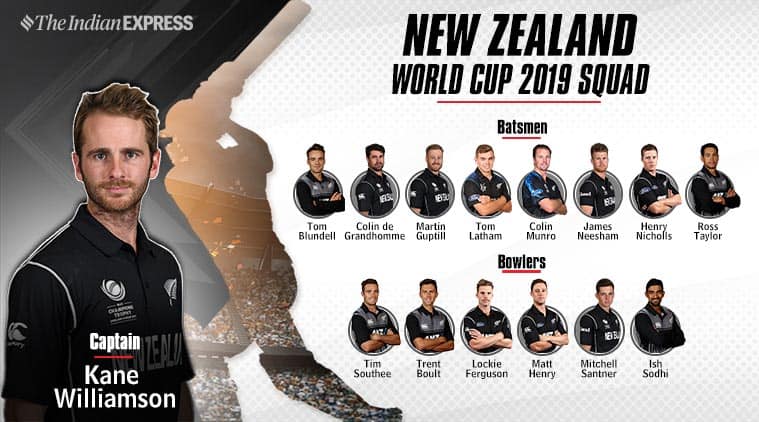 Kane Williamson-led Kiwi side, who play their first match against Sri Lanka on June 1, became the first team to announce their15-man squad for the mega tournament. In a major development, Tom Blundell, who is yet to play an ODI, has been included in the squad in place of Tim Seifert, after the wicketkeeper-batsman sustained a finger injury.

Spinner Ish Sodhi also found his name in the 15-man list and was preferred over Todd Astle as the team’s second spinner. In comparison with Astle, the 26-year-old has more experience with 63 ODI caps under his name. Astle, who was part of the New Zealand squad for their last ODI series against Bangladesh, has only appeared in eleven limited-overs internationals.

Ross Taylor is the most experienced amongst all as he will be the seventh Kiwi cricketer to participate in four cricket world cups. 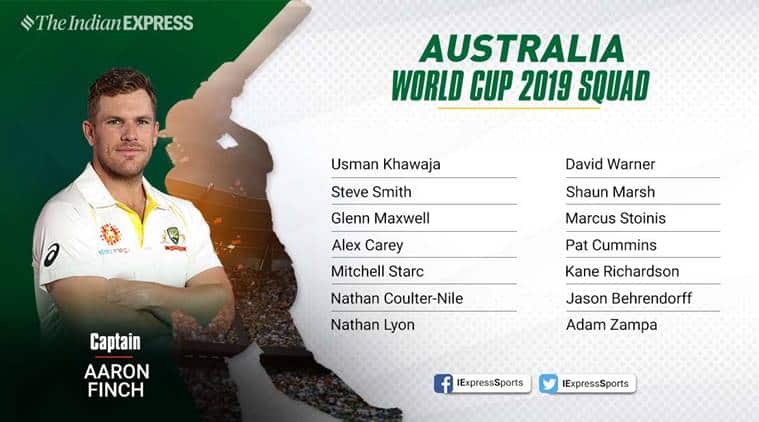 Australia are the defending champions for the 2019 World Cup.

After completing their 12-month suspension Steve Smith and David Warner are set to make a comeback in the international arena as the duo have been named in Australia’s 15-man World Cup squad. While the suspended duo of Warner and Smith are making a return to the national side, seamer Josh Hazlewood and Peter Handscomb were the big names that were left out from the squad.

Justifying the reason behind dropping Hazlewood, Australian chairman of selectors Trevor Hohns said that the seamer is yet to recover completely from the back injury that he sustained in January. “Having not played at the highest level for some time, we feel this will provide him with the best preparation to get some quality cricket under his belt,” Hohns said in a Cricket Australia media release.

The batting unit will be led by the skipper Aaron Finch along with Usman Khawaja, Shaun Marsh, Warner, and Smith. The team has also named two all-rounders in the form of Marcus Stoinis and Glenn Maxwell. Meanwhile, the pace battery will be spearheaded by Mitchell Starc and Pat Cummins. The other seamers that have been named in the squad are Nathan Coulter-Nile, Jhye Richardson and Jason Behrendorff.

Update: Jhye Richardson picked up an injury and has been replaced by Kane Richardson. 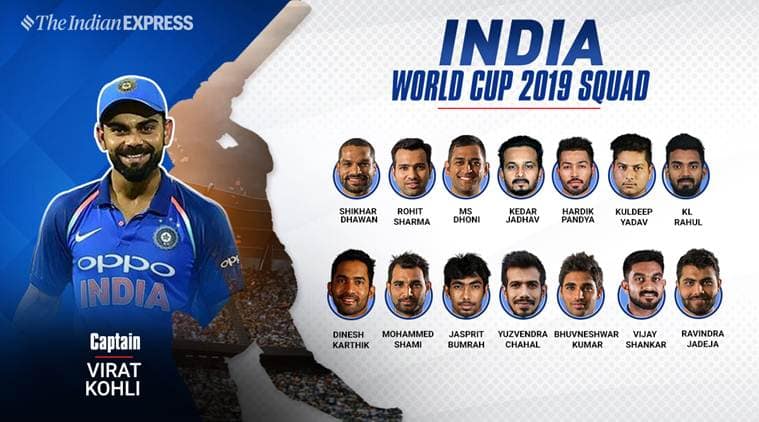 The probable prospects for the No. 4 position – Ambati Rayudu and Rishabh Pant were left out from the 15-man World Cup squad. In place of Pant, Dinesh Karthik will take the charge as the team’s second wicketkeeper.

The chairman of selectors MSK Prasad after announcing the squad said that the second wicket-keeper will only get a chance to play in case MS Dhoni sustains an injury. Keeping this in mind the selection committee decided to pick Karthik over Pant as the former’s glovework can prove to be handy in crucial encounters.

The side will be led by Virat Kohli and Rohit Sharma will be the vice-captain. The 15-man squad is a combination of six batsman, four all-rounders, and five bowlers.

The batting unit will be spearheaded by the skipper himself and he will be supported by Shikhar Dhawan, KL Rahul, Rohit, and MS Dhoni.

In the bowling unit, the team has opted for three seamers instead of four. Therefore, it makes the role of Hardik Pandya and Vijay Shankar more crucial as one out of the two will have to step in as the fourth seamer.

India will play their first match against South Africa on June 5 and will lock horns with arch-rival Pakistan on June 16. 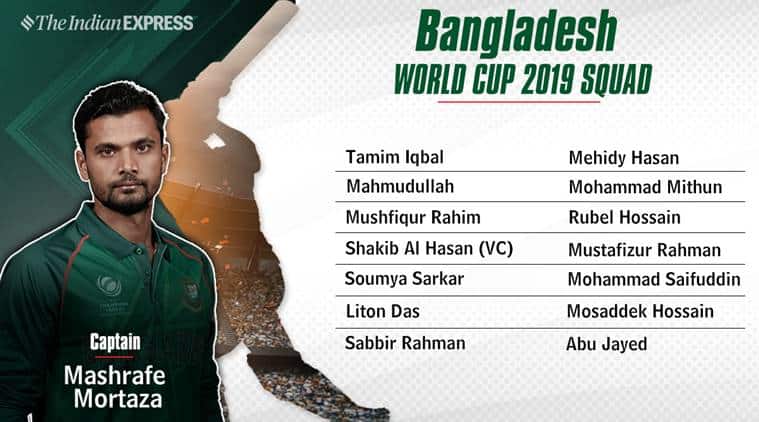 Bangladesh will play their first match at the World Cup against South Africa on June 2.

Rookie seamer Abu Jayed earned a spot in Bangladesh’s World Cup squad while batsman Mosaddek Hossain also made the cut in their 15-man squad for the showpiece tournament.

Jayed, who has played only five Tests and three T20Is, was picked following his performances in the two-Test series in New Zealand where he finished as the visitors’ leading wicket-taker.

Hossain, a middle order batsman who can bowl off-spin, last played for Bangladesh in the Asia Cup in September. He was not in the squad when they played Zimbabwe, West Indies and New Zealand across formats. 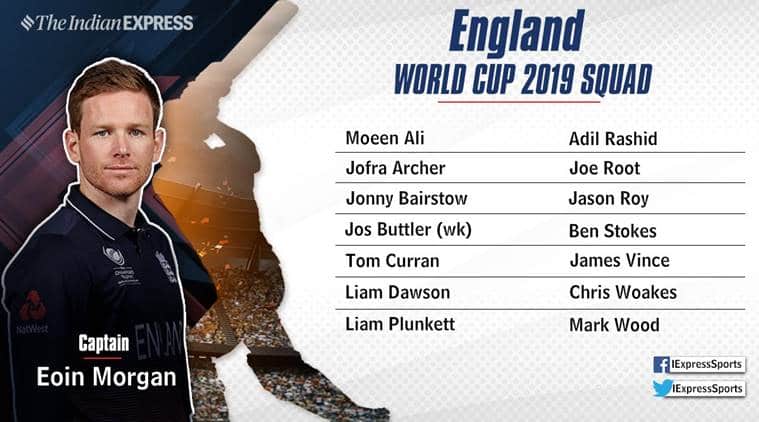 England will start their campaign against South Africa on May 30

Jofra Archer, who is enjoying a good run in the lucrative Indian Premier League, was not named in England’s preliminary 15-man World Cup squad. However, the Windies-origin cricketer has been included in England’s 17-member squad along with Chris Jordan that will play a limited-overs series against Pakistan prior to the cricketing extravaganza. The final squad of England will be decided after the series, which concludes on May 19.

Chris Woakes, Mark Wood, Liam Plunkett, David Willey, and Tom Curran will lead the batting unit. Joe Denly, who has only featured in nine ODIs, is the surprise entry in the bowling department and is likely to serve as a back-up option for the spin duo of Moeen Ali and Adil Rashid.

In a statement released, ECB’s national selector Ed Smith said, “In line with ICC regulations, we have to name a preliminary squad of 15 for the ICC Men’s Cricket World Cup before April 23.”

“However, all 17 players named in the Royal London ODIs against Pakistan can stake a claim to be in the final 15-man squad, finalised at the end of that series. The selection panel has been impressed with Jofra Archer’s performances in domestic and franchise cricket. He is a very talented and exciting cricketer,” it added.

Hosts England will start their campaign against South Africa on May 30.

Update: Alex Hales has been removed from the England squad following a second suspension due to recreational drug use. Jofra Archer, Liam Dawson and James Vince have been brought into the final squad. 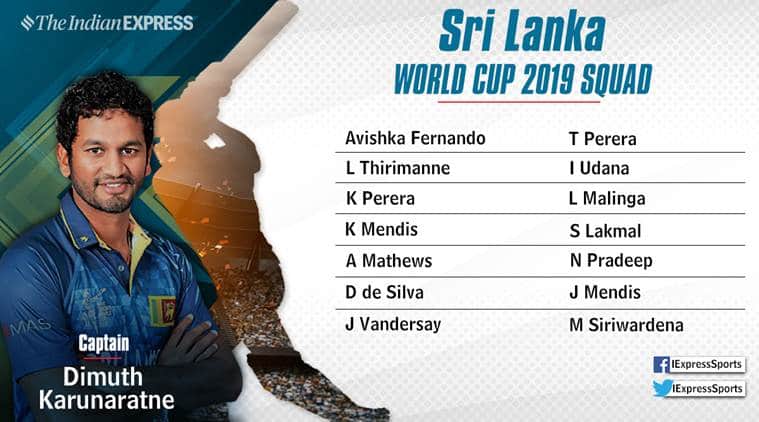 Dinesh Chandimal, Akila Danajaya, Niroshan Dickwella, Upul Tharanga were some of the big names that were not included in Sri Lanka’s 15-man World Cup squad. Meanwhile, Milinda Siriwardana and Jeffrey Vandersay, who have not featured in a single ODI since 2017 have been roped in the 15-member squad.

21-year-old Avishka Fernando, who didn’t have a brilliant outing in South Africa last month has also been included in the squad.

Lasith Malinga, Angelo Mathews, Thisara Perera, Kusal Perera are the key players that are a part of the World Cup squad. The bowling department will be spearheaded by veteran cricketer Malinga. The squad led by Dimuth Karunaratne will begin their campaign against New Zealand on June 1. 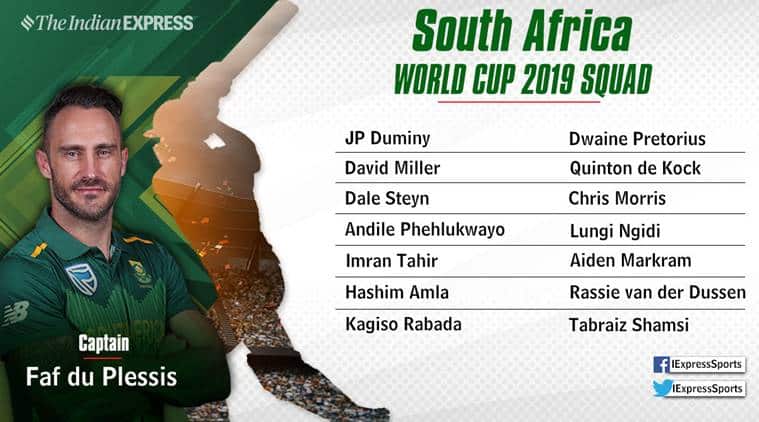 South Africa announced their 15-man squad for the upcoming ICC World Cup on Thursday. Hashim Amla’s experience helped him make the cut while Reeza Hendricks and Chris Morris missed out. Dale Steyn, who recently made a comeback into regular action for South Africa after resolving long-standing injury issues, has also been included in the squad.

UPDATE: Anrich Nortje has been ruled out of the tournament due to injury with Chris Morris coming in as replacement. 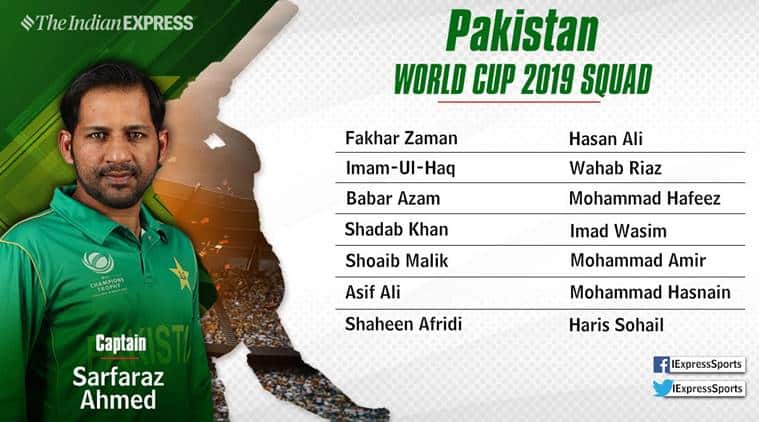 Pakistan had initially left out experience, but out-of-form, pacer Mohammad Aamir from its 15-member World Cup squad while including teenage fast bowler Mohammad Hasnain in the line-up. Chief Selector Inzamam-ul-Haq announced the squad and revealed Amir was left out of Pakistan’s world cup squad but has been included in their squad for their pre-tournament series against England.

UPDATE: Pakistan made three changes from their provisional squad to include Wahab Riaz, Mohammad Amir and Asif Ali. Abid Ali, Junaid Khan and Faheem Ashraf have made way. 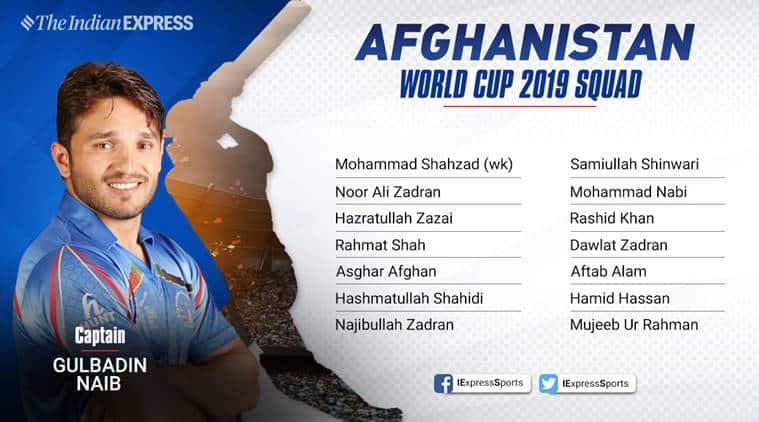 Afghanistan named fast bowler Hamid Hassan, who last played for the side in July 2016, in their 15-man squad for the Cricket World Cup on Monday. Hassan, 31, has played 32 one-day internationals for the war-torn nation and was also part of Afghanistan’s maiden appearance at the 50-over World Cup in Australia and New Zealand four years back.

In April, Afghanistan replaced long-serving ODI captain Asghar Afghan with Gulbadin Naib as part of wholesale changes to the team’s leadership structure across formats. While several senior players questioned the timing of the leadership changes before the May 30-July 14 World Cup, Afghan kept his place in the squad. 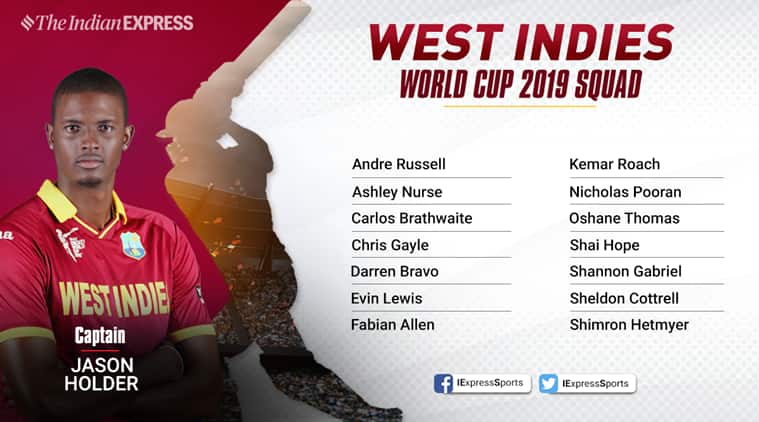 West Indies Cricket board ignored allrounders Kieron Pollard and Sunil Narine from the World Cup squad, while Chris Gayle and Andre Russell were included in the team. Darren Bravo also made it to the squad with wicketkeeper Nicholas Pooran. Here is their 15-man World Cup squad announced on Tuesday.

This story will be updated as and when other teams announce their final squads. The deadline for the preliminary squads was April 23 with the final squads to be announced by May 23, 2019.