After the Pulwama attack, former and current members of BCCI say sporting ties cannot prosper in the present environment. 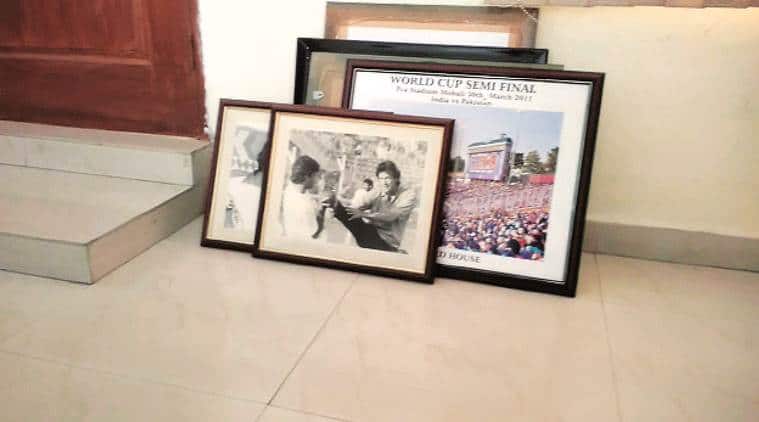 Pictures of Pakistani players have been taken down at the PCA Stadium in Mohali. (Express Photo)

India should not play Pakistan in the upcoming World Cup in the aftermath of the Pulwama terrorist attack, according to two former BCCI officials who still have a considerable say in policy matters of the board.

“How can you expect India to play Pakistan at the time we have lost so many of our brothers in these cowardly terrorist attack. I am of the firm view that India should not play Pakistan in the coming World Cup,” former BCCI secretary Sanjay Patel told The Indian Express.

The views of former IPL chairman Rajeev Shukla were also along similar lines. He said sporting ties cannot prosper in the present environment.

“I’ve always said that sport is above politics but now it will hamper sporting ties too, not until Pakistan-sponsored terrorism is stopped,” Shukla said.

Patel said the decision-makers in the board should take into account the prevalent mood in the country. He added that the clout India has in world cricket allowed BCCI and the Committee of Administrators to take any step they deemed fit.

“If we play World Cup, then it’s clear that game is bigger than the country’s image. For me, India is first and it’s not only me who has such a sentiment. Ask any Indian now, and they will be of the same view. Cricket will only take place if terrorism is stopped. I hope the current COA and BCCI takes note of it. There is always a limit to everything and this time all limits have been crossed,” he added. The mural of Imran Khan at the Cricket Club of India’s restaurant has now been covered by a paper bearing the club’s logo. Express Photo

Patel referred to the recent decisions taken by Cricket Club of India, Punjab Cricket Association, IMG-Reliance and Dsport prove that the prevailing sentiment in the country that people don’t want any relationship with Pakistan.

The former board secretary, who deposed in front of International Cricket Council’s (ICC) dispute resolution committee in the BCCI-PCB case over compensation for not playing bilateral series as per an agreement, said he had taken a hard line on the matter.

The cost of forfeiture

With tension between the countries escalating, the possibility of India forfeiting their World Cup round-robin match against Pakistan, on June 16 at Old Trafford, remains high. Such an event will affect the two teams, the broadcasters, advertising revenue and not least, the audience. Forfeiting a match, according to the tournament guidelines, account to a defeat, unless it's a mutual agreement, wherein both teams will share the points. There have been instances in the past when teams have refused to play/visit a country for safety and political reasons. In the 1996 World Cup, Australia and West refused to play in Sri Lanka citing safety issues due to the Sri Lankan civil war. Sri Lanka were awarded full points. In 2003, England refused to travel to Zimbabwe, then under Robert Mugabe's reign. New Zealand didn't travel to Kenya, where a terrorist outfit had issued bomb threats. Both teams conceded points to their opponents. But if the India-Pakistan match is forfeited, it would be the first such instance on a neutral venue. While the teams would lose points, the broadcasters and the host associations will miss out on substantial advertising and gate revenue, for the fixture is one of the most-watched cricketing match-ups in the world. In 2017, when the two teams met in the Champions Trophy group stage, then broadcasters Star India claimed they lost nearly Rs 10 crore after the match was truncated to a 48-over-a-side match. The 2015 match between them reportedly generated 288 million viewers and an ad revenue of Rs 110 crore.

“During the recent India-Pakistan board dispute, my stand was clear that we should not pay a single penny to PCB. The moment India withdraws from an ICC event, the World Cup will start falling. For me, human life is more important than sport,” Patel said.

With India scheduled to play Pakistan in the ICC World Cup on June 16 at Old Trafford, Shukla opted to play it safe on the chance of the 1983 and 2011 World Cup winners boycotting the contest. He said the tournament is still months away for a call to be taken right now.

“Cannot say now whether we will play Pakistan in the World Cup as it’s too far but our policy and position is very clear. We will wait for the government’s decision,” he told Times Now.

According to World Cup rules, in case a team doesn’t play its scheduled match, the opposition team gets the points from the game.