Cricket returns to Australia after days of mourning in a practice game where India’s short-stuff dismisses CA XI. 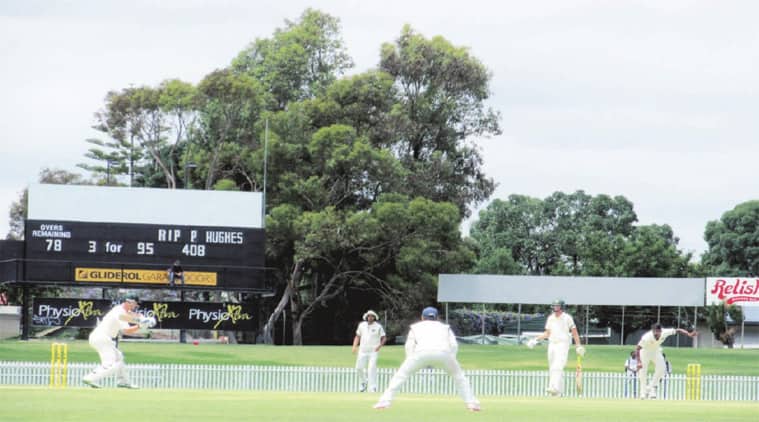 The scorecard at the Gilderol Oval in Glenelg paid tribute to Phillip Hughes. (Source: Express photo by Bharat Sundaresan)

Imagine a ground in your locality with everyone from the carpenter, mason, electrician, dry-cleaner and grocer from the neighbourhood allotted space around it to advertise their wares via medium-sized hoardings. Now add a dose of typically Australian tranquillity and charm to it. A smattering of trees, archaic stands, sprawling grassbanks and of course a bar. There you have it, the Gliderol Oval in Glenelg, a pleasant beach-side Adelaide suburb, around half-hour away from the vibrant Hindley Street.

The general quiet around the ground also ensures that any sound made here travels, far and wide. And when Varun Aaron’s bouncer struck Sebastian Gotch in his ribs, the thud that sounded more like a ‘dhobbb’, resonated around the Oval. There wasn’t any over-reaction from the handful that had gathered to catch the visitors in action.

But yes, a couple did cringe. The sound of the thud had barely dimmed, when there emerged a loud ‘yeahhh’ from the sidelines. It came from Virat Kohli, who was busy doing stretches near the bomb-shelter-shaped dugouts at the Oval, followed by applause for his express pacer. The captain had just endorsed Aaron’s tactic to test the young Victorian wicket-keeper’s skills against the short ball.

In a way, both Kohli and Aaron had also set the tone for the rest of the tour. In the aftermath of the Phillip Hughes tragedy, many had wondered whether the short-pitched delivery had become a hazardous liability. Or whether it would make an appearance at all during the Tests. Even Ryan Harris was on record wondering how he would even get himself to bowl after having seen his teammate being killed on the field of play. And he’d sat there with his pace partner-in-crime Mitchell Johnson and watched Hughes taken to his final resting place in Macksville.

But the visitors in a way took the initiative of dispelling those fears on Thursday while also showing that it was time to move on. They’d also proved that bouncers were as much an integral part of cricket as scoring runs and taking wickets, and that they were here to stay. And that it was ok for the Aussies to give it back to them.

Gotch was hit by Aaron in the 33rd over of the first day’s play. It wasn’t the first real bouncer that the Indian pacers had bowled till then. Far from it. They had tested the bounce of the Oval wicket on at least a 20 occasions by then. Aaron himself had bowled close to half-a-dozen with Alex Keath even having been rendered medical attention after being hit on the knuckles by a rising delivery.

Ishant Sharma, Mohammad Shami and Umesh Yadav too had not shied away from trying to bounce out the Cricket Australia XI batsmen. Some had been more accurate than others in their quest. Aaron’s bouncers had posed the most stringent test to the home team. A couple had flown over the right-handers’ left shoulder as they attempted hooks. Shami’s were more erratic, a couple testing Wriddhiman Saha’s agility behind the stumps.

Much like Ishant and Yadav, who at times got the Aussies jumping and ducking but were also pulled with disdain on occasion.

When the left-handed Jake Doran walked out to bat, you could see coach Duncan Fletcher rush to the balcony of the dressing-room and direct Aaron to bowl to him from around the wicket. The pacer obliged and followed up the change of angle with a testing bouncer. Doran ducked out of the way but was rushed into doing so.

Aaron was also the best of the Indian bowlers overall as Cricket Australia XI were bowled out for 243. He finished with figures of 4/41, but more importantly displayed the kind of consistency both in terms of pace and precision that should make him an obvious pick for the opening Test. Two off his wickets came via catches behind the wicket. Top-scorer Jordan Silk was dismissed by a rising delivery that caught his glove and carried to Suresh Raina at second-slip. Aaron had earlier got one to zoom past his helmet grill.

The other two victims were beaten by pace and played the ball onto their stumps. The young Aussie new-ball attack didn’t refrain from responding in kind, dishing out a number of short-pitched deliveries to the Indians, who finished the day on 99/2. Captain Kohli did survive a scare, one not too unfamiliar to him. One that haunted him in England. An attempted drive, an outside edge, and an easy catch to first slip.

That too off the first delivery he faced. But this time, courtesy Ashton Turner’s butter-fingers, he survived, and lived to fight on Friday.

And even as cricket tries to bounce back from having lost one of its own in a grim twist of fate, the action in Glenelg was an indicator that we can be rest assured about the upcoming four-Test series being a bouncer-less fare.

After the meet, PM-CMs retreat