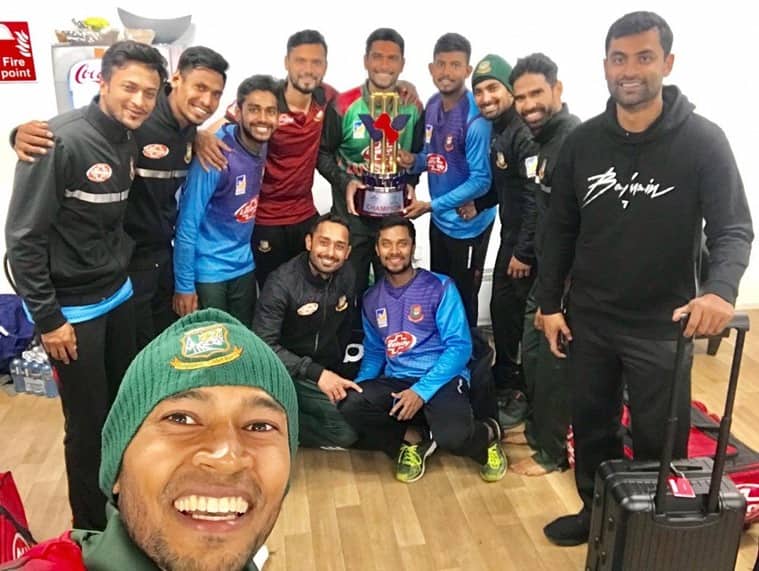 Bangladesh won its first multinational one-day international trophy when it won the Irish tri-nations final, beating the West Indies in a rain-affected match on Friday.

The West Indies made 152-1 but was stuck on 131 without loss in the 21st over for more than five hours until rain passed and the outfield dried up.

When play resumed, the final was reduced to 24 overs per side.

West Indies openers Shai Hope and Sunil Ambris combined for 144 until Hope was smartly caught on the midwicket boundary by Mosaddek for 74 off 64 balls.

Hope finished the series with two centuries and 87 and 74 from five games.

Ambris, 69 not out in his sixth ODI, and Darren Bravo, on 3, saw out the last eight balls.

By the Duckworth Lewis method, Bangladesh was set 210 to win in 24 overs.

Alhamdulillah! Finally, we have done it. Well played Soumya Sarkar and Mosaddek Hossain. It was pleased to see your batting. #BANvWI #TriSeries pic.twitter.com/Bjs6XAVm4m

Soumya Sarkar gave it a terrific start with 66 from 41 balls, including nine boundaries and three sixes. He was out in the 12th over at 109-3.

Mushfiqur Rahim added 36 off 22, and Bangladesh needed 27 off the last three overs.

That’s when Mosaddek launched into left-arm spinner Fabian Allen with 6-6-4-6-2-1 and reduced the equation to two runs to win.

Mosaddek finished on 52 not out off 24 balls, after five sixes and two boundaries, and Mahmudullah was with him on 19 not out.