Mohammed Azharuddeen smashed a 37-ball ton during a 54-ball 137 against Mumbai, hitting nine fours and 11 sixes in the domestic T20 Syed Mushtaq Ali Trophy game. It was the third-fastest T20 century by an Indian after Rishabh Pant (32 balls) and Rohit Sharma (35 balls). 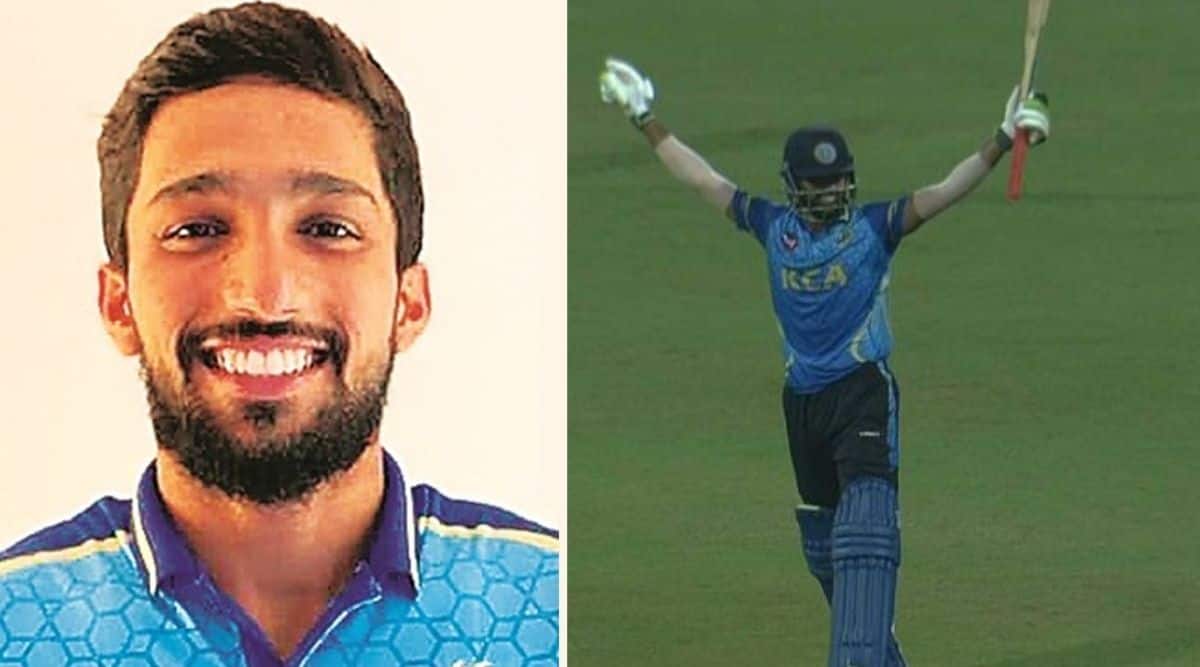 On Wednesday, 26-year-old Mohammed Azharuddeen made his seven brothers, his home town and an entire state proud. (BCCI)

A CRICKET-CRAZY elder brother didn’t give him much of a career option by getting him to change his name from Ajmal to Mohammed Azharuddeen. Moreover, he hailed from Thalangara, that rare town in Kerala on the outskirts of Kasaragod where children prefer to hit the ball with a bat and not kick it.

But Azharuddeen knew he needed to do something special to live up to the expectations of that brother, Kamaruddeen, a “lifelong fan” of Indian batting great Mohammad Azharuddin. Thalangara, too, had high hopes from their “Next Azhar”.

On Wednesday, the 26-year-old made his seven brothers, his home town and an entire state proud.

He smashed a 37-ball ton during a 54-ball 137 against Mumbai, hitting nine fours and 11 sixes in the domestic T20 Syed Mushtaq Ali Trophy game. It was the third-fastest T20 century by an Indian after Rishabh Pant (32 balls) and Rohit Sharma (35 balls).

“Not just us, but the whole of Thalangara was glued to the TV to watch him bat,” says Kamaruddeen.

With video clips of Azharuddeen’s batting racing through social media, India cricket circles couldn’t hide the excitement of hearing that familiar and popular name once again. The high priest of big-hitting, Virender Sehwag, tweeted: “Wah Azharudeen, behtareen! To score like that against Mumbai was some effort. 137* of 54 and finishing the job on hand. Enjoyed this innings.”

It was a quality Mumbai attack. But Azharuddeen dispatched former India pacer Dhawal Kulkarni and IPL 2020’s new star Tushar Deshpande over the fence to help Kerala chase 196 with 4.1 overs to spare. The one blow that resonated the most was a Rohit Sharma-like flick off the hips, a shot that needs a sharp eye and perfect timing.

Says former India pacer and Kerala coach Tinu Yohannan: “I was expecting such an innings from him but not of this magnitude. I love his pick-up shot over square-leg. It is good to watch and is not easy for the bowlers… when they bowl just short of a length, to be hit over the fielder is demoralising.”

While his coaches call him a natural strokeplayer, the role played by his seven brothers can’t be undermined — all of them have played cricket at the district level. “I was 25 and working in the Middle East when he was born. Since he was the youngest in our family, we would indulge him quite a lot. All his wishes were fulfilled,” says Kamaruddeen.

So seamless was Azharuddeen’s progress through age-group cricket, that by the time he was 15, he was admitted to the Kerala Cricket Association Academy in Kottayam, dreaming of playing first-class cricket. “Thalangara has a very good ecosystem for budding cricketers. It’s a small town, but we have around 20 cricket clubs. It may sound surprising, but cricket is more popular here than football,” says Unais, another brother.

Ever since Azaruddeen broke into the Kerala squad six seasons ago, he has been dubbed as “Azhar in the making”. But with a first-class average of 25.91 after 22 games, and an equally middling average of 23.76 from 21 T20s, his returns were underwhelming. “He has always been a big hitter. It is just that he was not used for various reasons in an appropriate position. He was used down the order all these years at No.6 and No.7, and that did not suit his game,” says Yohannan.

It was during the Covid lockdown that Azharudden seemed to have decided that time was running out. “He called me during the lockdown when I was appointed coach and asked where I would slot him in the batting order. I had no doubt because I had always thought of opening with him in limited overs cricket. His mind was clear and he didn’t have any doubts,” says Yohannan.

And now, with the IPL auction coming up next month, a data nugget from that high-profile T20 tournament illustrates the hard climb ahead: West Indian great Chris Gayle sits on the top of that mountain — with 100 in 30 balls.