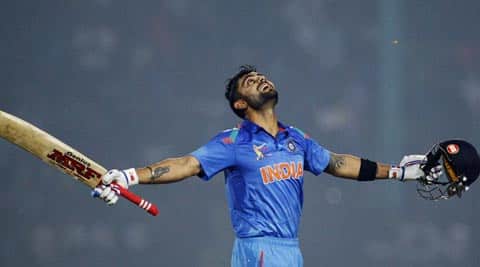 After India were reduced to 54 for two in 12.5 overs, chasing 280 for victory, it became imperative that captain Virat Kohli stayed till the end, score big and see the side through. Kohli didn’t finish things off, but by the time he got out, after scoring 136 off 122 balls, India had already won the game. Any apprehension about the stand-in skipper being bogged down by the added responsibility were dispelled at the Fatullah Cricket Stadium’s dew-sodden outfield on Wednesday. It was Kohli’s 12th ton in a successful run chase and 19th overall in ODIs, which put him on par with Brian Lara. On Wednesday, he went about his task very methodically and made most out of the loose balls. His innings was laced with 16 fours and two sixes and he had a strike rate of 111.

There was just a half-chance when Kohli was on 35, but Rubel Hossain at square-leg dived over the ball and let the opportunity slip.

The latter somewhat made up for his error by sneaking through the defence of India captain but it was a little too late.

A Score to settle

India had some score to settle. Two years ago in the Asia Cup here, they lost to the hosts. And ahead of this game, there were some big talks from the Bangladesh camp with medium pacer Mashrafe Mortaza taking a dig at their more fancied rivals, saying it would not be an upset for Bangladesh to beat India. Normal service was restored on Wednesday. Ajinkya Rahane, preferred over Cheteshwar Pujara despite scoring 2, 3, 3, 36 and 7 in his last five ODIs, responded positively. An 83-ball 73 was classy but Rahane would be disappointed to perish softly — a tame scoop to long-on with just eight runs left for victory. “I backed myself. Also, I scored a century in the last Test in New Zealand and carried forward that confidence into this game,” said Rahane.

Together, he and Kohli added 213 runs in 32.5 overs for the third wicket to help India get back to winning ways after a series of losses. Their stand also silenced about 17,000-odd fans who turned up at this small venue. Most of them started to leave midway into India’s run chase.

The pitch was good for batting, though the odd ball kept low. Rohit Sharma and Shikhar Dhawan began steadily but once again they wasted their starts. Dhawan went first when he played over a straight delivery from left-arm spinner Abdur Razzak and was caught plumb in front. Rohit was bowled through the gate by Ziaur Rahman. Bangladesh were just one more wicket away from putting India under serious pressure, but Kohli and Rahane didn’t let that happen. In the end, the six-wicket win looked very comfortable.

Earlier, Mushfiqur Rahim made a bold statement with the bat. Ahead of their Asia Cup opener, the Bangladesh captain was summoned by his cricket board for publicly making his displeasure felt on matters of team selection. Also, without Tamim Iqbal and Shakib Al Hasan, he was the team’s main batting hope. He came at a time when Bangladesh were under pressure, having lost Shamsur Rahman and Mominul Haque for just 49 runs. Rahim started off cautiously but soon found his rhythm.

He countered R Ashwin — the off-spinner was bowling with a changed action — by using his feet to very good effect. He withstood pain to complete his second ODI hundred. Interestingly, it was only the second time in ODIs that both captains scored centuries in the same match.

The 39th over in the Bangladesh innings was eventful. Rahim had already hit Varun Aaron for 14 runs in his first four balls. Aaron’s response was a beamer that rammed into Rahim’s rib-cage. The skipper was grimacing in pain but didn’t cut short his innings. He reached his hundred in the 46th over. Later, while fielding, he badly hurt his right shoulder and was taken to the hospital for an x-ray. The beamer cost Aaron dear. It was his second offence that barred him from bowling further in the match. Rahim let nothing to affect his concentration and ended up with 117 runs in 113 balls. It was a fantastic effort.

If Rahim’s batting was picture-perfect, Amanul Haque was a bit ungainly. He preferred to stand and deliver but was effective anyway. His 77 off 106 balls was a good effort which allowed his captain the time to settle. Together they added 133 runs for the third wicket which was Bangladesh’s highest partnership for any wicket against India.

For India, Mohammed Shami picked up four wickets, keeping it tight upfront and varying his pace and length in the death overs. Bhuvneshwar Kumar was steady with the new ball without being threatening, while Ashwin and Ravindra Jadeja managed to get in some tight overs. But Aaron, despite working up serious pace, leaked runs freely and conceded 74 in his 7.5 overs before being removed for the transgression.

The Indian bowlers managed to keep Bangladesh to a par total on this surface but matches against stronger opponents will give a better idea of where they stand. For the first time in a long while, the seamers tried to utilise the two bouncers per over rule. The flip side was that Ambati Rayudu had to bowl in the middle-overs. Without Yuvraj Singh or Suresh Raina, India lacked a proper sixth bowling option. They might need one against Sri Lanka and Pakistan.

Sidharth Malhotra: Second film is important and it was very positive