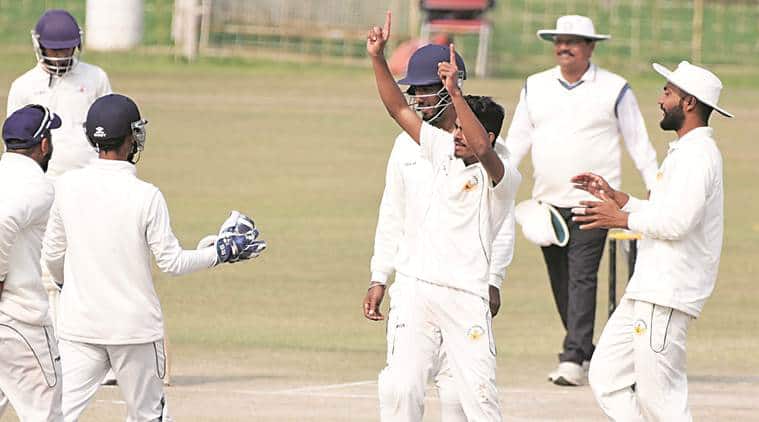 A five-wicket haul by Apurva Anand helped visitors Bihar restrict Chandigarh to a first innings’ total of 270 runs before Yuvraj Chaudhary claimed three wickets to leave Bihar at 130 for 4 in their second innings at the end of the day’s play of the match of the Col CK Nayudu Trophy being played at Sector 16 Stadium on Friday.

The day started with Chandigarh resuming their first innings at 148 for 4. Overnight batsman Akshit Rana and Bhagmender Lather added 79 runs for the fifth wicket before Rana fell LBW to the bowling of Rana at an individual score of 30 runs.

Rana smashed six boundaries during his 55-ball stay at the crease. Lather and Yuvraj Chaudhary then added 23 runs for the fifth wicket before Lather fell LBW to Rana in the 60th over with the Chandigarh scoreboard reading 250 for 6.

Lather played a knock of 56 runs and smashed five boundaries and two sixes during his stay at the crease. After the fall of Lather’s wicket, Chandigarh lost the remaining four wickets for 20 runs as Rana completed his five-wicket haul. With the first innings’ score of 270 runs, Chandigarh took a 130-run lead. For Bihar, Apurva Anand claimed five wickets for 74 runs while Sachin Kumar Singh grabbed four wickets for 77 runs. Vikas Jha claimed one wicket for 46 runs. Trailing by 130 runs, Bihar openers Bipin Saurabh and Pranav Singh added 32 runs before Singh was clean bowled by Yuvraj Chaudhary at an individual score of three runs. Saurabh was then joined by S Gani and the pair added five runs for the second wicket before Saurabh was caught by Akshit Rana off the bowling of Choudhary in the tenth over. Saurabh played a knock of 29 runs and smashed six boundaries during his knock.

Six overs later, Harsh was clean bowled by Choudhary at an individual score of one run. At that time, the Bihar scoreboard read 49 for 3 in 16 overs. Gani and Utkarsh then added 34 runs for the fourth wicket before Gani was run out after a brilliant throw by Choudhary in the 36th over. Gani played a knock of 36 runs off 77 balls and smashed four boundaries during his knock. Utkarsh and Sachin Kumar Singh then added 47 runs for the fifth wicket before the end of the day’s play. Utkarsh was batting on 33 runs while Singh was batting on 31 runs. For Chandigarh, Yuvraj Choudhary claimed three wickets for 28 runs.

Watch: Passengers protest against IndiGo ban on Kunal Kamra with placards on flight