A masterclass: Virat Kohli coaches the forward-press to KL Rahul at the nets

With Rahul struggling to find runs at the T20 world cup, Kohli stepped in at the nets to offer tips on the front-foot trigger movement and the head position. 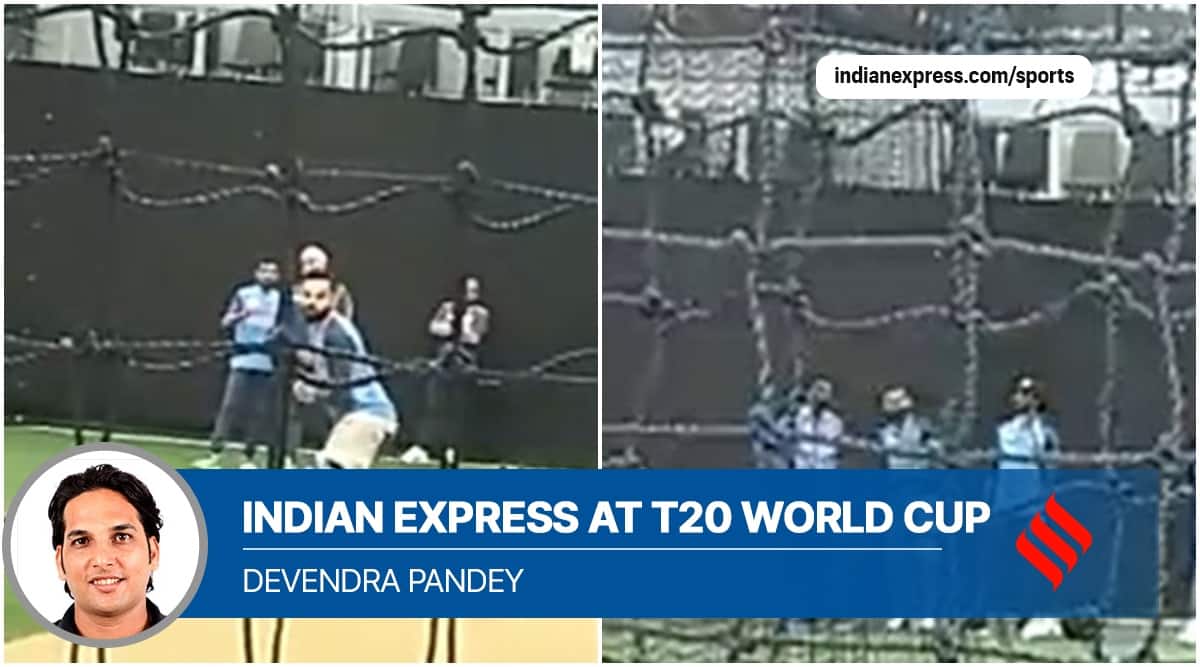 (From Left) Virat Kohli advising KL Rahul on his feet and batting stance; Virat Kohli having a long chat with KL Rahul. (Screengrab/Video by Devendra Pandey)

Vikram Rathour, the batting coach, took a couple of steps, raised his right arm, and was about to fling the ball across when he stopped. Rathour walked across the Adelaide nets, fingers pointing at the batsman KL Rahul’s feet. ‘Look, where you have moved your front foot before the release’, words to that effect. Watching it from behind Rathour was Virat Kohli, arms crossed across his chest. Behind him, at a short distance away, was Rahul Dravid.

Just before Rathour had done his ball-throwing-mimic act, Kohli had had a word with Rathour. Now, after a glance at Dravid, he would walk up to Rahul. He would enact his favourite press-forward advice that he has given to Venkatesh Iyer too in the IPL in the past.

There he stood, with Rahul all ears and eyes, and did the shadow move with his feet. The left foot pressed down the pitch – not across – in a short but decisive stride, and he would open up his left shoulder and play a shadow shot. He would show how the upper body doesn’t get locked and was free to spring off that front foot to react to the demands of the ball. He had advised Venkatesh the benefits of that approach, although it was in relation to how Venkatesh should approach a short ball, the essence was about that front-press. “Always react, don’t predetermine. As long as you are pressing forward, you are in a good position to leave, good position to get under the ball and good position to rock up. From here you can spring up. If your base is good, no need to go back,” he would tell Venkatesh that day.

Rahul has been in strife of late. An old problem has resurfaced. Often, he has been seen playing around the front pad. He does a short two-step movement with his left foot to open his body but occasionally presses it across – and as Rathour would spot a tad too early before the release itself – and gets into trouble with the nip-backer and the straightener outside off.

Batsmen tend to play with the head and the feet movement is allied to help that. Once the balance is upset, you can have either your head falling over, outside the off stump or you can get squared-up even to straighteners outside off when you get conscious and try to resist that movement. Of late, he has neither been getting behind the line or staying adjacent but in an in-between land of nowhere where only troubles intrude. That front foot movement doesn’t just work against him when the ball comes in, as it did in the first couple of games, but also it can affect when the ball leaves him. Like it did in the previous game against Lungi Ngidi.

It’s a problem he knows has got him out of the Indian team after 2018 troubles in England. Once in a chat with Dinesh Karthik on Star Sports, he had talked about the change that had enabled his comeback.

KL Rahul practices indoors at the Adelaide Stadium on the eve of India’s game against Bangladesh.

“I have tried to keep my initial movement as small as possible and try to do it at the right point so that I am ready before the ball is delivered. That’s something that I really practised very hard at in the training sessions and nets. It is to get into the ready position at a precise time, you don’t want to do it too early or late on it.” These days, perhaps, it’s a touch too early, and at positions which upset his balance at the crease.

Back then he had worked with his friend and former Ranji team-mate David Mathias. “I could see that he was having problems with the incoming ball and that the bat was too far away from the body and head was falling, “Mathias had told The Indian Express. “I felt that hands were away from the body and since the bat tends to be heavy, it gets to be dragged even further away. When the head isn’t in a great position, then your bat doesn’t travel in a straight path. When the ball comes in there is a gap to go through. And top-class bowlers can exploit it easily, and they did.” Now, they are re-doing it.

On a rainy Monday afternoon, the Kohli chat continued, he informed Rahul about his head position and what he could do better. How he could probably play closer to the body.

Virat Kohli having a long chat with KL Rahul.

Despite his lack of form, the Indian team management will continue to back Rahul against Bangladesh. Coach Dravid has made the support very clear.

“In these conditions, maybe we are able to afford him that time. We completely back him. We have no concerns about him. We know that when he gets going, and I’ve seen it against Australia, against a top-class attack just a couple of weeks ago, I know the impact this guy can make. I think in Rohit’s and my mind, there’s absolutely no doubt about who’s going to open for us,” Dravid said during pre-match conference.

If Rahul was a concern at least for the outer world, there were a few other pointers from the nets. Dinesh Karthik, who left the field in the final overs against South Africa due to a back pain, did turn up for the optional practice session and stood behind the stumps. Dravid said his fitness will be assessed on the match day morning.

It is learnt that Karthik will pave the way for Rishabh Pant for the game against Bangladesh. Former players like Kapil Dev and Virender Sehwag have been pressing for Pant to replace Karthik; it appears they might get their wish.

The other question was whether Deepak Hooda stays or will Axar Patel reclaim his spot. Patel batted at the nets along with Harshal Patel and R Ashwin. The rain did affect the outdoor practice but the Indians regrouped at indoor nets to chip away at their issues as their world cup campaign rumbled on.