A Duckworth/Lewis calculation would have first set South Africa a target of 273 in 45 overs, and then reduced this to 257 from 43 overs, meaning that South Africa would have needed 5 runs to win off the last ball. 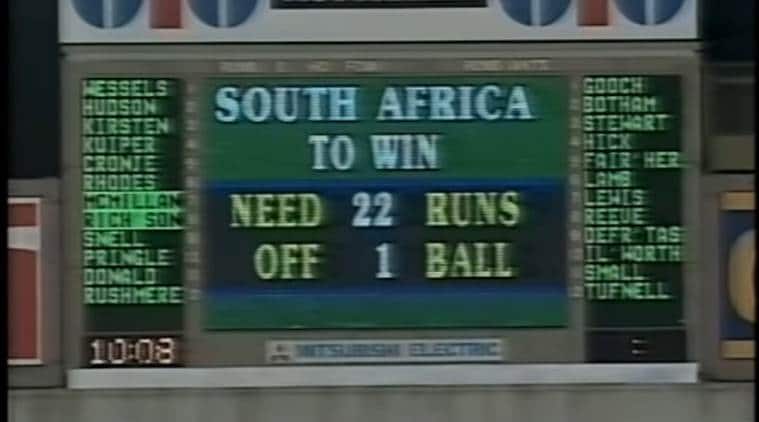 The scoreboard initially read South Africa needed 22 runs to win off one ball. It would later be corrected to 21 runs. (Source: Youtube screengrab)

Possibly the biggest farce in World Cup history was played out when South Africa met England in the semi-final of the 1992 edition, when a bizarre rain rule robbed the Proteas of a spot in the final of their maiden World Cup.

South Africa were making their first appearance in the World Cup, with the ban imposed on them due to apartheid by the cricketing world since 1970 recently having been lifted. They made an instant impact. They beat Australia and West Indies in the round-robin stage, booking a spot in the second semi-final in Sydney, against Graham Gooch-led England.

Batting first, England scored 252/6 in 45 overs, with an earlier rain delay having forced the match to be revised as a 45-over match. Graeme Hick top scored for them, with 83 off 90 balls.

South Africa’s chase got off to a positive start and when Rhodes (43 off 38 balls) was batting and it seemed they were well within reach of continuing their fairy tale campaign, with Pakistan waiting in the final.

As the Sydney sky kept darkening, South Africa needed 22 runs to win off 13 balls. What happened next was proof of how cricket with restrictions on broadcast duration needed to find a way to deal with rain interruptions. A rule introduced for the 1992 World Cup stipulated that in case there was a rain interruption in the second innings, the reduction in the target was to be proportionate to the lowest-scoring overs of the side batting first.

Twelve minutes of rain was all it took to prove how this rule would be impractical when enforced at the end of an innings. When Brian McMillan and David Richardson returned to the pitch to continue the chase, the scoreboard showed they needed 22 runs off one ball to win (It would later be corrected to 21), courtesy Meyrick Pringle’s figures of 9-2-36-2.

“None of us could work out what they needed and the scoreboard actually got it wrong, showing 22. At that time even the umpires were battling to work it out. It was a very unfair way to do it. For them to have lost two overs and then be left needing more than 20 off one ball was shocking,” Allan Lamb, one of the England fielders, wrote in The Guardian in 2009.

A Duckworth/Lewis calculation would have first set South Africa a target of 273 in 45 overs, and then reduced this to 257 from 43 overs, meaning that South Africa would have needed 5 runs to win off the last ball.

Brian Mcmillan blocked the last ball of the match. England went through to the final, but then lost to Imran Khan-led Pakistan.

Selvaraghavan is a terrific actor: Suriya