West Indies vs Australia (WI vs Aus) Highlights: Starc finished with 5/46 to restrict West Indies to 273/9 after Australia, riding on Coulter-Nile's 60-ball-92, set 289 despite the early meltdown of the top order.

West Indies vs Australia: Sensational bowling by Mitchell Starc and a fiery show by Nathan Coulter-Nile with the willow guided Australia to a 15-run victory against West Indies at Trent Bridge on Thursday. Starc finished with 5/46 to restrict West Indies to 273/9 after Australia, riding on Coulter-Nile’s 60-ball-92, set 289 despite the early meltdown of the top order.

West Indies got off to a poor start as both openers Ewin Lewis (1) and Chris Gayle (21) fell cheaply in the World Cup match at Trent Bridge. Lewis was dismissed in the second over by Pat Cummins while Chris Gayle was sent back by Mitchell Starc in the sixth over. While West Indies kept losing wickets at regular intervals, Shai Hope and skipper Jason Holder kept the Carribean side in the hunt.

Hope scored 68 off 105 balls, while Holder made 51 off 57 before falling to Starc in his final spell. Australia next play India on Sunday.

Scroll below for highlights

All over! Australia win by 15 runs. Starc's 5/46 undoes all the good work done by Hope (68) and Holder (51). It was a classic ODI encounter between two teams who were up to the occasion. However, West Indies will look back on some bad decisions that made this chase too difficult for them in the end. That 9th over from Starc completely devastated them.
Coulter-Nile is the Player of the Match for his all-round efforts.

Four boundaries in the 50th over

Nurse hits Coulter-Nile for four consecutive boundaries in the last over. Only driving home the point how close this match could have been.

What a disappointing end to the match, when it promised so much just a while ago. Nurse and Oshane Thomas not making too much effort to take this match to the 50th over. Equation down to 32 needed off 7 balls now.

BOWLED! Starc has demolished West Indies! Cottrell is out. Fifth wicket for Starc! Windies lose their 9th wicket. No doubt who today's gamechanger has been. This match was so evenly balanced till Starc cleaned up both Holder and Braithwate in his 9th over.

4 runs have come off the last 2 overs

That Starc over seems to have changed this game completely. He is back to bowl his last over now. Windies need 34 off 17 balls to win. Can their tail wag enough from here on? Going after Stoinis would be the way to go.

Holder is OUT! Will this be a case of so near but so far for the West Indies? Australia's move to throw the ball to Starc in the 46th over has worked wonders. Got the two danger men out in one over. What a brave innings this was from Holder though. Sheldon Cottrell walks out.

WICKET! Brathwaite has to go! Holder still out there, on 51. We are set for a nailbiting finish. Starc lured Brathwaite into that flase shot with a slow full toss. Ashley Nurse in at No.9.
WI- 252/7 in 45.3 ovs

Starc has two overs left, one of which he will bowl now. Coulter-Nile has one. The two remaining overs will decide this match. Australia thinking that they need to get West Indies all out rather than take this chase to the 50th over maybe.

Holder and Brathwaite looking to hit the big shots. With the difference between runs needed and balls remaining down to single digits now, you have to wonder whether looking for the gaps would be the more sensible approach from here on. Holder needs to stay of course, he is the heart of this West Indies team.

A huge hit for six, a flat-bat for four and a close run out appeal - it's about as tense as can be at Trent Bridge!

The captain of the #MenInMaroon is driving them to the target – his wicket is crucial here.

Say a prayer for your nerves. This could go down to the wire. #AUSvWI LIVE 👇 https://t.co/riLpupROEA pic.twitter.com/MNk3Y3qhcG

Brathwaite failing to connect so far

Pat Cummins has got the better of Brathwaite so far. Brathwaite is swinging but swinging without making contact. Pat Cummins has only bowled two deliveries today which would have hit the stumps, the lowest proportion of any seamer. He's been accurate, but more in the channel outside of.
WI need 56 runs from 43 balls now. No reason to panic about the required run rate yet.

What a game this is turning out to be #AusvWi #WorldCup2019

Pollard is not happy

Time and time again we tend to be on the wrong end of decisions... and the masses are not vociferous bcuz y......🤔🤔. Piss piss poor decision making in this game and it continues ... it is blatantly alarming .… https://t.co/wmsXnzdLFG

Carlos Brathwaite is out there with Holder now. West Indies 6 wickets down. Will Brathwaite validate Ian Bishop's clarion call to 'REMEMBER THE NAME!' from the 2016 World T20?
Two overs of Maxwell/Stoinis left.

Russell is OUT! Australia fielders are ecstatic! Russell was threatening to get this chase over in no time. Maxwell, running back, does extremely well to get his hands onto the ball and then hold on to the catch.

He had looked in serious touch, but tries to go big one time too many, and Glenn Maxwell holds onto another brilliant catch running back!

Australia had three men on the boundary between long on and long off for that last ball of the Zampa over.
Starc vs Russell now. You can't take your eyes off this contest for a moment. 147 kph outswinger from Starc. Creamed for four down the ground.

MONSTER SIX! 103 metres! Russell creams his very second ball! This chase is well and truly on! Tries to clear the ground again but that's just landed inside the ropes. This match could be over in a jiffy if Russell gets set in. Alarm bells will be ringing for Australia. Windies need 79 runs off 72 balls now.

He's brought up 1000 career ODI runs with one of the biggest sixes you'll ever see! 😮

West Indies will need more from him – this #AUSvWI clash is too close to call! #MenInMaroon | #CWC19 pic.twitter.com/t0uP96EkhX

Fourth overturned decision of the innings

Unbelievable! Holder is given out lbw again! Again, Holder challenges the decision. And again the decision is overturned. That was missing the wickets by a mile! You could have cut the tension with a knife when the players were waiting for the replays on that one.
'The umpiring in this game has been atrocious' Michael Holding says in the comm box. West Indies have reason to feel hard done today.

4 overturned reviews so far shows how the umpiring has been. Far too many mistakes. Very poor.
And this is a World Cup. #AUSvWI

BIG WICKET! Disaster for West Windies as Hope goes for 68. Good innings from him. Can West Indies complete the chase with him gone?
Andre Russell! The big man has just stepped in. He will surely have an impact on this chase. 99 runs off 90 needed now. Will be child's play for him if he can find momentum. 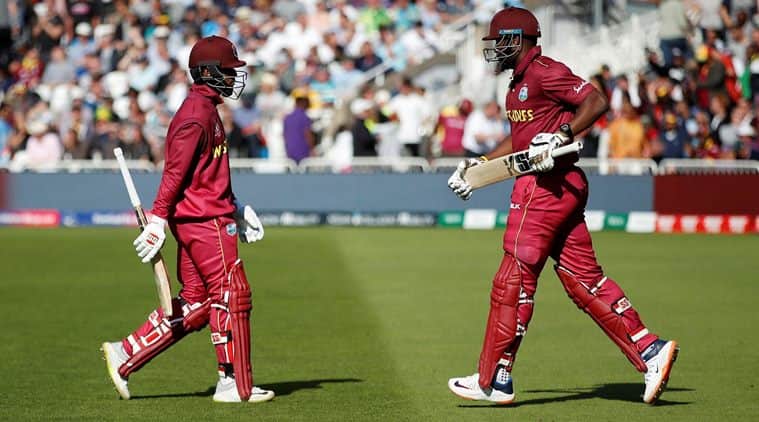 Three times West Indies have overturned the umpire's decision in this match. Twice by Gayle and once by Holder. Holder was given out lbw, but replays showed that the ball from Maxwell has pitched outside the line of leg stump. Is this a record for overturned decisions in one innings?