Story of an anti-hero: How Rubel Hossain broke Bangladesh out of jail

After long depressing losing streaks and match-fixing betrayals, Bangladesh, belatedly, had a genuine reason to celebrate. 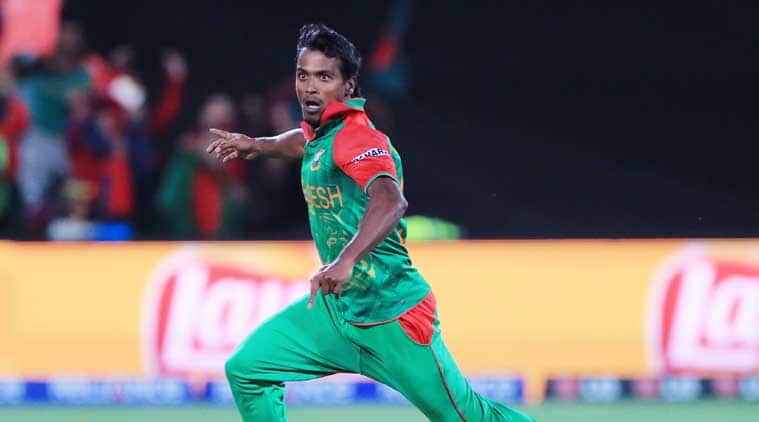 After long depressing losing streaks and match-fixing betrayals, Bangladesh, belatedly, had a genuine reason to celebrate.

Out on bail in a sex case, Rubel Hossain was behind bars a couple of months back. Today, miles away from that dingy cell where he spent 3 days, and inside a packed-stadium sparkling under floodlights, he executed Bangladesh’s most famous cricketing heist.(Full Coverage| Venues | Fixtures)

The 27-year-old, who was among convicts and under-trials in a Dhaka jail in January, is now a national hero. On the field he’s responsible for smashing the jaws of defeat with two deathly blows and snatching an unlikely win. For those dancing on the streets of Dhaka he had done a lot more. He was finally justifying the unconditional faith of a cricket-crazy nation that pampers its stars like nowhere else. After long depressing losing streaks and match-fixing betrayals, Bangladesh, belatedly, had a genuine reason to celebrate.

Fourteen years after becoming the 10th Test playing nation, the team that calls itself ‘Tigers’ reached the ‘last eight’ of a World Cup for the first time. Bangladesh Cricket’s director and former captain Akram Khan speaking on phone from Dhaka, conveys the excitement. “The country has erupted. They have hit the streets and you can’t imagine the noise,” he said.

Coming to the party

All because of the 48th over bowled by Rubel before which England needed 16 for victory, a distinctly do-able job considering on the crease were Chris Woakes (42) and Stuart Broad who had hit a six in the previous over.

READ: It’s a great turnaround for us, says Mashrafe Mortaza after England win

The Broad six was that point in the tight game when the commentators silently get off the fence and start questioning the temperament of the trailing team. So once again they started speaking about Bangladesh’s chronic sweaty palms. Till Rubel shattered the stumps. Two balls later he did it again. Myth-breaking has never been this dramatic. Commentators would soon tip-toe to the other side of the fence where they would be roaring ‘Rubel, Rubel’.

Actually, three weeks back, these same shouts were bringing the roof down in Canberra where Bangladesh were playing the opener against Afghanistan. In a press box crowded with Bangladesh reporters, I had cautiously asked one of them if the formerly incarcerated cricketer was popular back home. With a wink I was told, “Don’t know why but he has become more popular after that case. Maybe, the fans want to show their support to him.” Much later, long after the game got over, other reporters in hushed tones would float more conspiracy theories. They would sound like the lawyer representing Rubel in the case that played out like a soap opera before the World Cup.

It had started late last year when a 19-year-old actress Naznin Akter Happy alleged that Rubel, after a long and far from platonic relationship, went back on his promise to marry her. The fact that she was known for her title role in a movie called Kichu Asha Kichu Bhalobasha (Some hope, some love) showed how life imitated art. In a country where rape victims aren’t named in reports to hide their identity and avoid the stigma, Ms Happy would be on national television saying that she would pull out the case if Rubel was ready to marry her. In turn, the cricketer’s lawyer would use the word ‘blackmail’ often when speaking on the issue.

Even in Canberra, cricket reporters would repeat the word. “He doesn’t know the city ways. He is a poor boy from a village. He is a rare talent for Bangladesh.” You had reasons to doubt the first statement, the following two though were factually correct. Rubel isn’t from a big city, he hails from Bagerhat, a district known for its six-dome mosque. Akram endorses that he is a special talent. “Rubel is the only bowler in Bangladesh who can bowl at 145. There is no one in the country as fast. It was unfortunate that he was involved in some controversy and that is his personal matter. Personally I had faith in him.”

Faith is that one word that you hear often when you are among Bangladesh cricket followers. “We don’t carry anti-stories about cricket, no one wants to see them. No TRPs” a TV reporter had said after I asked too many Rubel questions.

On the afternoon of the Bangladesh-Afghanistan game, just after the national anthems were played, I finally saw something that made me understand the country of die-hard supporters. A grown up man, a senior journalist, next to me, had tears rolling down his cheeks as Rabindranath Tagore’s Amar Shonar Bangla ended in a crescendo. We exchanged smiles as he got his handkerchief out. All through the game he would pump his fist when an Afghan wicket would fall.