CWG 2018 India Wrestling: Indian wrestlers finished their campaign in CWG 2018 with two gold and two bronze medals on Saturday. Vinesh Phogat and Sumit Malik won the gold medals in the women’s 50kg and men’s 125kg while Sakshi Malik won the bronze medal in women’s 62kg. The other bronze medallist was Somveer who won the medal in 86kg. India won a medal in each category and finished at the top of the medals tally in wrestling. With five gold, three silver and four bronze, India took the first place amongst Commonwealth Games nations.

In final bout for India at the Commonwealth Games in 2018, Somveer wins 7-3 to take home the bronze medal. Incredible effort to turn things around

Somver vs Alexander Moore in the second period

Moore extends his lead to two points as Somveer looks to find an opening. Finds that and attacks the legs to make it 3-3. Crowd roars as Somveer levels things. Two minutes to go in this. Lovely footwork from Somveer to turn defence into attack and Moore is taken down. Somveer now leads 5-3. Under a minute left now for the Canadian to try and turn things around. Extends his gap with under ten seconds left. Somveer now leads 7-3 and goes on to win

In India's final bout from wresling at the Commonwealth Games, Somveer steps up on the mat against Alexnader Moore of Canada. Very cagey start to the contest with Somveer taking the lead first after Moore couldn't make most of 30 seconds advantage. He turns things around with a takedown. 2-1 at the end of the first period

VINESH PHOGAT WINS GOLD IN WOMEN'S 50KG FREESTYLE! She started slowly on the day but grew in confidence as the matches went on. A brutal showing in the final to down Jessica Macdonald. Turns around her heartbreak from Rio Olympics where she was stretchered off.

Smart start from Jessica Macdonald to keep Vinesh at bay in the first part of the second period. But Vinesh comes back strongly as the clock ticks down to extend her lead beyond ten points. Wins 13-3 in the end.

In gold medal match for 50kg freestyle, Vinesh Phogat steps up on the mat against Canada's Jessica Macdonald. Thirty seconds in and what a show of power from Vinesh. Lifts Macdonald in the air over her shoulder for a massive takedown. Takes a 4-0 lead. Yet another double leg takedown by Vinesh and she now leads 8-0. This is proving to be a mauling. Make that another takedown and she now 10-0. Macdonald gets on the board and makes it 3-13. She now has a lock on Vinesh and the referee intervenes to get Macdonald some medical attention. Big cut near her eye even as Canada have challenged. The referral has been upheld and the score has been revised to 10-3 in favour of Vinesh. And that's the end of the first period

SUMIT WINS GOLD MEDAL IN 125kg FREESTYLE! Another walkover for Sumit in the competition as Sinivie Boltic was injured earlier. Comes on for the formalities and the referee lifts his arm. Sumit goes on to fly the flag over his shoulders and takes in the applause.

SAKSHI MALIK WINS BRONZE MEDAL! Sakshi with a tough 6-5 win over Tayla Ford of New Zealand. Not the most pleasing of performances from her at the CWG. She won't be best pleased with CWG more of a breeze for most Indian wrestlers.

Lovely start for Sakshi Malik in the second period. 30 seconds in and she starts with a takedown of Ford. Leads 4-2. Another takedown with under 90 seconds to go and that's two more points for Sakshi. Leads by 6-2 now. Ford reduces the gap to three as she goes on the attack by catching Sakshi's leg. But what beautiful defending from Ford to overturn Sakshi's advantage to make it 6-5. With under ten seconds to go, Ford goes on the attack and Sakshi desperately holds on to win 6-5 in the end.

Been a disappointing day for Sakshi Malik. Her quest for a medal from now on looks tough. She is up against New Zealand's Tayla Ford in the final 62kg Nordic. Ford starts by taking a 2-0 lead before Sakshi returns with a takedown to level matters at 2-2. It is 2-2 after the first period

In the medal matches set for later in the day, Somveer will contest for the bronze medal against Alexander Moore. Sakshi Malik, Sumit and Vinesh Phogat will continue in the Nordic events.

Sumit downs Tayab Raza of Pakistan in the gold medal match in 125kg. What an epic contest which had Sumit leading early before Raza came back to reduce the deficit at 3-2. It was all Sumit after that as he displayed incredible athleticism even as Raza went for it all. Once going across the length of the zone on one leg, hopping as he did, to avoid stepping outside the bounds. He wins 10-4 in the end and WINS THE GOLD MEDAL!

Somveer through to bronze medal match

Somveer downs his Australian opponent Jayden Lawrence 7-0 for a victory by fall in the 86kg freestyle repechage. He is through to the bronze medal match

What a comeback from Sumit!

What an incredible comeback from Sumit to win this bout against Korey Jarvis of Canada. Incredible stuff from the Indian to overturn a 0-2 points deficit. Turned it around to make it 3-2 before it became 3-3 with clock ticking down. But Sumit once again flipped Jarvis in final five seconds to win 6-4. What a win for Sumit that.

Needing a win to make it to the gold medal match, Sakshi Malik goes down to Aminat Adeniyi of Nigeria. What an extremely nervous bout for Sakshi. Trailed by a slender one point at 3-4 before Adeniyi came back to bag another two points. Wins 6-3 and ends Sakshi's hopes of improving on last time's silver. Would have to be happy with a bronze at best now

Somveer goes down to Muhammad Inam of Pakistan

That is just humiliation! Inam with 2 gut wrenches and makes it a differnce of 10-0 to win by technical superiority against Somveer. No final for Somveer here

Sakshi Malik for her next bout in the nordic system. She will wrestle Aminat Adeniyi of Nigeria. She needs a win her to keep herself in that contention for a medal

Sumit wins as Cameroon no show

Sumit in men's 125kg wins after Cameroon's Claude KOUAMEN MBIANGA does not show up. India have begun well so far in the competition. Somveer next up

Vinesh Phogat with her first win and it is a hard fought one! She holds off Nigeria's Miesinnei GENESIS 6-5 at the end of the six minutes. Win to start with

That is the end! Fazzari with a last second takedown over Sakshi Malik and she has a 10-8 win. India challenge but that is clear two to Canada. Final score 11-8

Sakshi Malik vs Fazzari: What a bout

Sakshi Malik leading Fazzari 8-6 with a minute to go. Fazzari is mounting a big comeback here. She has tied it 8-8 with Sakshi holding criteria. Can she hold on?!

Somveer with a big win over Kookoo! A first period fall for Somveer. Magnificent move from the Indian wrestler. He moves into the next round

Somveer Kadian will take on Taebontangaroa Kookoo of Kiribati in the men's 86kg freestyle. He is wrestling at his first ever Commonwealth Games. Here we go!

There it is! A push out, then a four point throw, another push out. A takedown and then a gut wrench. Sakshi Malik finishes her first bout inside the first period. Brilliant wrestling

Sakshi Malik will be the first wrestler on the mat for India. She is wrestling Berthe Emillene ETANE NGOLLE of Cameroon. This should not take much time for Sakshi

Hello and welcome to the live coverage of the wrestling at the 2018 Commonwealth Games. Sakshi Malik, Vinesh Phogat, Somveer and Sumit are the four wrestlers in action for India. Sakshi and Vinesh are very strong contenders for a gold medal here 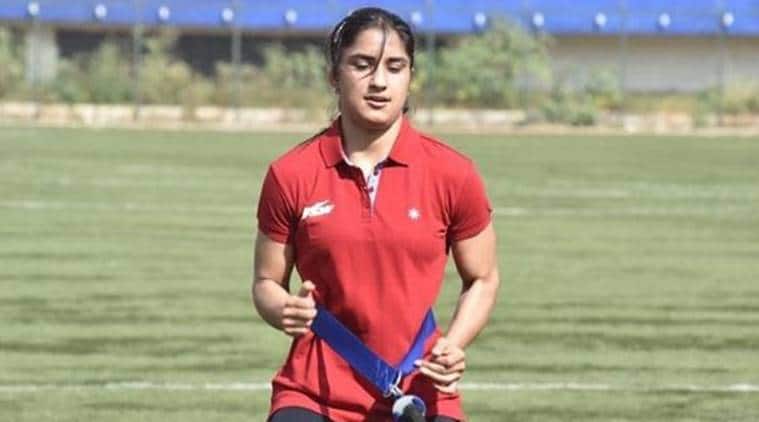 So far, India have won eight medals in wrestling at the Commonwealth Games 2018 in Gold Coast. On the first day, Rahul Aware and Sushil Kumar brought home gold medals while Babita Phogat won a silver medal. Kiran won a bronze medal on day one. On day two of the competition, India won one gold, two silver medals and one bronze medal. Bajrang Punia was the only gold medallist from India. The two silver medallist from India were Pooja Dhanda and Mausam Khatri after they had contrasting loss in the finals. Divya Kakran was the sole bronze medallist. Four more wrestlers go to action on the penultimate day. Sakshi Malik and Vinesh Malik will compete in women's freestyle while Somveer and Sumit will compete in the men's freestyle.