Saina Nehwal became first Indian women's player to be World No.1 in badminton. 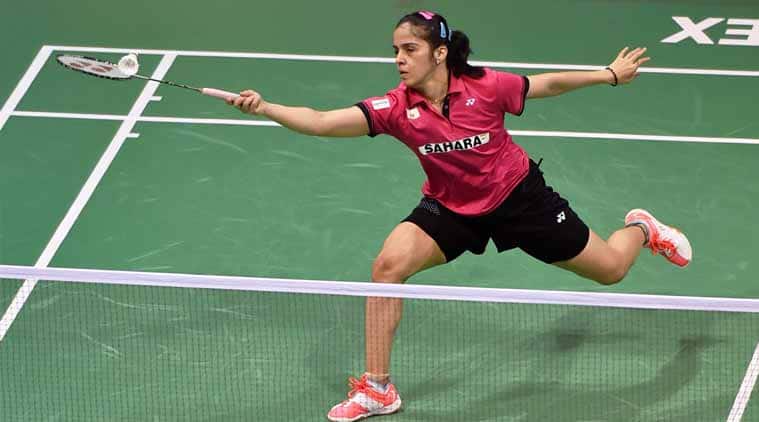 Saina is also the first non Chinese player since 2010 to hold the top position. (Source: PTI)

Saina Nehwal doesn’t really have a lot of affection for the badminton courts at Siri Fort. For, the relatively smaller venue has plenty of drift which makes it difficult for shuttles to go where players want them to.

“These courts really don’t suit me,” Nehwal had complained after one of her scratchy early matches at the 2015 India Open Super Series. Then again, apart from the Commonwealth title in 2010, she had never got past the quarterfinals in the four previous editions of her “home” Super Series at this venue.

Yet, it’s this “draughty” venue that’s perhaps going to be particularly dear to Saina and historic in the context of Indian badminton. On Saturday, as a result of the matches that she played in this hall, she will become the first Indian woman to reach the world No.1 in the international badminton rankings when the BWF releases the list next Thursday.

The scenario of Nehwal ascending the rankings list was clear ahead of the tournament itself. Badminton’s world ranking takes into account a player’s ten-best performances over the past 52 weeks. And before the tournament, Nehwal was ranked world No.2 with 74,381 points behind China’s Li Xuerui (79,214 points).

But Xuerui, who was the runner-up in Delhi last year, has been battling injury. The Chinese champion wasn’t even participating this year which meant she will drop 7,800 points, lowering her tally to 71,414. Indeed, Nehwal would have surged ahead of Xuerui, even if she had pulled out herself. The only obstacle for Nehwal was if Spaniard Carolina Marin won the tournament and if she herself failed to make the final.

On Saturday afternoon, Marin faltered as she lost 19-21, 23-21, 22-20 to Thailand’s Intanon Ratchanok. The result meant that Marin will have 73,618 points as of next week. But that isn’t to say Nehwal will achieve her top rank purely by another’s performance.

Playing a tricky Japanese opponent Yui Hashimoto, to whom she had lost in the 2013 edition of this tournament, Nehwal cruised to a 21-15, 21-11 win to make the final herself guaranteeing herself 77,141 points.

When the rankings list does become official next week, Nehwal will be the first non-Chinese player since Denmark’s Tine Baun in 2010 to hold the number one spot in the women’s category. In the men’s category, Prakash Padukone had held that position 35 years ago. Nehwal was herself ranked at 2 back in 2010 and has been a top-10 player since 2009.

After her win against Hashimoto, Nehwal let out a smile. “It’s an incredible feeling. I sometimes think I won’t believe it until I see the ranking list myself,” she said.

That take was at odds with her remarks over the week, possibly in an effort to keep expectations modest, when she had dismissed talk of rankings. “I want to be the best. It’s not about the ranking, it’s about being consistent.”

It was indeed the fact that she had been plagued by a string of poor results against the top Chinese players that Nehwal had made a crucial change to her training plans last year. After losing to Xuerui at the 2014 World Championships, Nehwal made the decision to leave coach Pullela Gopichand at Gopichand Academy where she had been training since she was 14 years old. She instead started training at the Padukone Academy in Bangalore under Vimal Kumar.

“It wasn’t an easy decision to make. But when I was young and I kept losing to better players. I knew that if I had to improve, I had to play in Hyderabad. Then last year once again when I kept losing to the top Chinese players, I felt that I had to do something differently. So I made the change to go to Vimal sir,” Nehwal said.

Changes were made – with particular focus on back court play and court movement. In addition, Saina had lengthy chats with Padukone, who spoke on how he would play and beat the top players of his era. All that paid off. In November, she beat three Chinese players en route to the title in the China Open Super Series. At the World Super Series Final, she beat current World No.3 Wang Shixian. Then on her way to the final of the All England Championships earlier this month, she beat Wang Yihan, a player she had lost to on each of their seven previous encounters.

Nehwal’s road ahead isn’t entirely smooth though, for her subsequent performances will determine how long she stays at the top. Nehwal had said as much earlier in the tournament. “Li Xuerui is injured. You can’t ignore the fact that she’s the best player in the world. When she comes back she will be strong. The Chinese will come back and they will be ready for us,” she had said.

But this time Nehwal is also ready for the challenge. “For the first time in a while, I am enjoying myself, I am more relaxed and I am doing well against the top opponents,” she said.