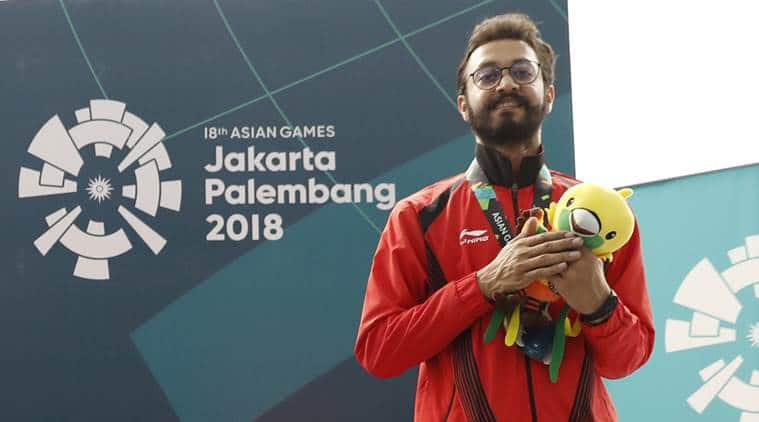 Moments after he won the medal, 29-year-old Abhishek Verma had a long chat with his father – discussing law terms. (Source: AP)

Abhishek Verma grew up hearing law jargons and courtroom parleys. But instead of pursuing law, Verma — son of a district and sessions judge in Haryana — chose to study computer science. His interest in law increased when preparing for UPSC exams. But during that time, he took up shooting as a hobby at a local academy. On Tuesday, he left his mark on one of the biggest stages in the sport.

Verma won the bronze medal in the 10m air pistol event, finishing behind Saurabh Chaudhary and Japan’s Tomoyuki Matsuda in a tough field. But moments after he won the medal, the 29-year-old had a long chat with his father – discussing law terms. “During my UPSC preparation, my interest in law grew, and it was the same time when I started shooting. So when I would feel tired after reading law, I would shoot and when I was tired after shooting, I would study law,” Verma says.

Verma started taking shooting seriously only in 2016, when he finished eighth in the trials for the World University Shooting Championships in Poland. “The scores which the top three shooters shot was the score which I would shot in practice. So I told my parents that lets give shooting a serious try,” says Verma.

A silver medal in the civilian category in the 2016 nationals was followed by a bronze medal in KSS Memorial Championships last year. He then competed in the ISSF World Cup in Germany on his own expense under MQS category and shot a score of 585. He shot the same score in the fifth selection trials, which meant the Haryana shooter edged out seasoned pro Jitu Rai for a spot in the team for the Asian Games.

“There has been pressure as I took shooting seriously. When I won the spot for Asian games, Jitu congratulated me and things like these motivate me. Same was in the final today where former Olympic champions and world champions were taking part. Even Saurabh had won a Junior world Cup gold. But as I shit, I grew in confidence,” says Verma.

Verma has been training at the Eklavya Sports Shooting Academy in Gurgaon for the last three years and his coach Omendra Singh was keenly watching the final. With Verma joining his academy at the age of 26, Singh faced some challenges in adjusting Verma’s technique. “We needed to correct things like when to hit the trigger and how to adjust the sighters. He would often pull the trigger late but with time, he understood and spent more time in training,” Singh says.

And at the Verma home in Palwal, father Ashok Kumar was delighted about Abhishek’s achievement. “Abhishek has always been fascinated about shooting and action movies and after he did his engineering, he also showed his eagerness for preparing for UPSC. But he would also focus on swimming. When I was posted in Hisar, he joined shooting as a hobby and after sometime, I got him his first pistol,” he says.

As for Verma, there is one thing he still loves. “Like shooting, I still read books about law and keep myself updated about latest changes and laws,” Verma says.