And with that, we come to the end of the closing ceremony of Asian Games 2018. Thank you for joining us. Here is a beautiful picture from one of the performances at the ceremony to end the live blog with: 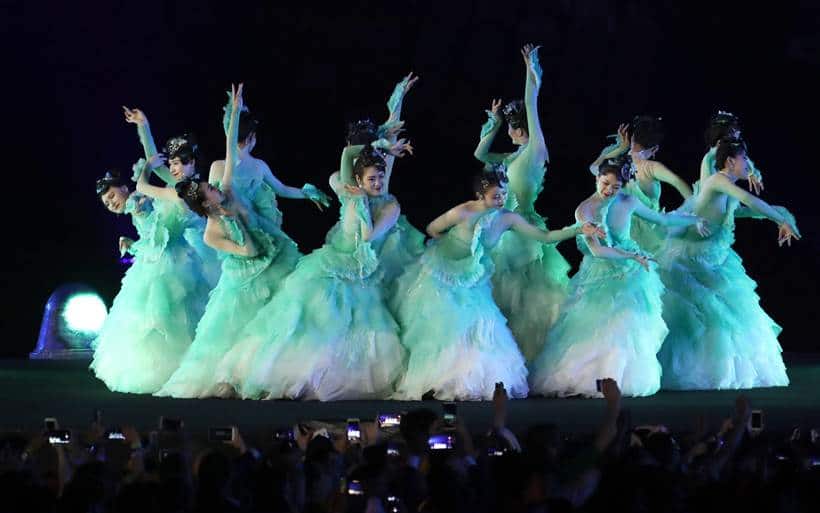 Another firework display brings an end to Super Junior's performance. And oh dear, there is no stopping the fireworks now.

The official theme song of the 2018 Asian Games, "Meraih Bintang" (Reaching for the Stars), has been performed. Is that the end? Nope. It's Kpop time.

Asian pop-culture at display with one performance after the other. Siti Badriah performing currently. She is followed  by a group called RAN.

Indonesia have some obsession with fireworks. Some ten fireworks are lit every few minutes. During the opening ceremony, the fireworks went on for some 15 minutes.

Despite the DOWNPOUR, the fireworks and flash going on at #AsianGames closing ceremony in Jakarta pic.twitter.com/CYHwxPMk9o

After Siddharth's Jai Ho, time for boy band iKon to mesmerise the crowd.

Flavours of India at the Asian Games.

The commentator goes, 'Something strange is happening.' I agree.

The Asian Games flag has been taken down and presented to China, the next country to host the Asian Games in 2022. The handover ceremony ends with the Chinese national anthem.

We’ve been brilliant across sports & our athletes’ record-breaking performances are a sign of things to come. Congratulating every Indian athlete, medalist & the entire support system that made #AsianGames2018 such a huge success for India🇮🇳. 69 medals 👍👍 #SportPLAYINGIndia pic.twitter.com/7pEBBEEBa6

Here is a glimpse of the closing ceremony, under beautiful lights and colours

#AsianGames in #Indonesia closing amid a glamorous ceremony full of FLASH pic.twitter.com/Kp0aWkq2hz

After some more fireworks, the President of Indonesia Joko Widodo appears on the screen and he is welcomed with a loud cheer. He then addresses the fans and athletes from Indonesia's earthquake-affected region Lombok, where a 6.9 magnitude earthquake hit just before the start of the Asian Games, killing almost 100 people.

With a total of 15 GOLD 24 SILVER & 30 BRONZE medals, India has recorded it's BEST EVER RUN in the history of #ASIANGAMES at #ASIANGAMES2018.
Hats off to our athletes, who accomplished this feat with sheer tenacity, determination and hard work. We r all proud of them! #KheloIndia pic.twitter.com/vfcEOzHIGU

Isyana Saraswati sings a beautiful song and the screens show a flashback of memorable moments of this Asian Games.

All the participating countries' representative walk in with their national flag. Rani Rampal marches in with India's flag at the closing ceremony.

The ceremony has begun. And it began with a bang. After an announcement welcoming all to the stadium, fireworks rise from the roof to greet fans as well as participating athletes and officials. The Indonesian national anthem is sung.

Japan claim final gold medal of 2018 Asian Games with mixed triathlon win. It was the one and only event held on day 15.

Asian Games 2018 Closing Ceremony Live Updates Live Streaming: India Women’s Hockey team captain Rani Rampal on Sunday expressed her gratitude to the Indian Olympic Association and Hockey India for giving her the opportunity to lead the India contingent at the Closing Ceremony of 2018 Asian Games. In a tweet, Rampal said that she feels immensely proud to be India’s flag bearer. “It’s a matter of great pride for me to be the flag bearer of our contingent during the closing ceremony of Asian Games today,” she wrote. India lost to Japan 2-1 in the final in the final and had to settle for a silver medal. It was after 20 years that India had reached the Women’s Hockey final in 20 years. Rampal, who was nursing back from an injury, was in tears after losing the final.