Michael Clarke made only 15 in his last Test innings but he led his team to a crushing win by an innings and 46 runs. 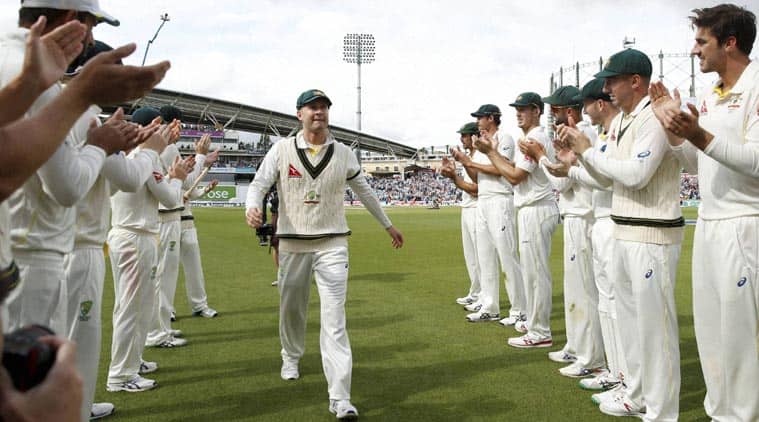 Michael Clarke didn't score many runs but led his side to a comprehensive win. (Source: AP)

Retiring Australia captain Michael Clarke paid tribute to his team mates after they sealed a consolation victory over England in the final Ashes Test at The Oval on Sunday.

Clarke made only 15 in his last Test innings but he led his team to a crushing win by an innings and 46 runs after they relinquished the Ashes by losing the fourth test in Nottingham.

Clarke, 34, and Australia opener Chris Rogers, also playing his final Test, were given a guard of honour by their team mates as they left the field.

“The way the boys played in this Test match was a reward for all the hard work we have put in on this tour,” Clarke said at the presentation ceremony.

“We showed, grit and fighting spirit and the Australian brand of cricket we want to play.

“England deserve a lot of credit for the way they played and they thoroughly deserve to win the series but it has been a privilege and an honour to captain the Australian team.

“I’ve been really lucky to play with some fantastic players who have given everything for the team and Chris is definitely one of those.”

“We showed that when we play well, we’re easily good enough, but we didn’t put in enough good performances,” he said.

“We’ll look back at this and think ‘What if?’. I never thought I would get this second opportunity and to be a part of it is pretty special.

“I feel like a bit of an impostor — I played 80 less games than Michael Clarke. I have massive respect for him and I wish him well.”

Rogers, Australia’s man of the series, said the five Tests had been played in a sporting manner.

“It was fiercely contested but there wasn’t any of the niggle that we’ve had in previous series,” he said.

“These are the series that you get up for and it’s been great to be a part of.”