In the medal round, Verma was the only shooter to shoot four scores in excess of 10 in the first series before a last shot of 9.4. 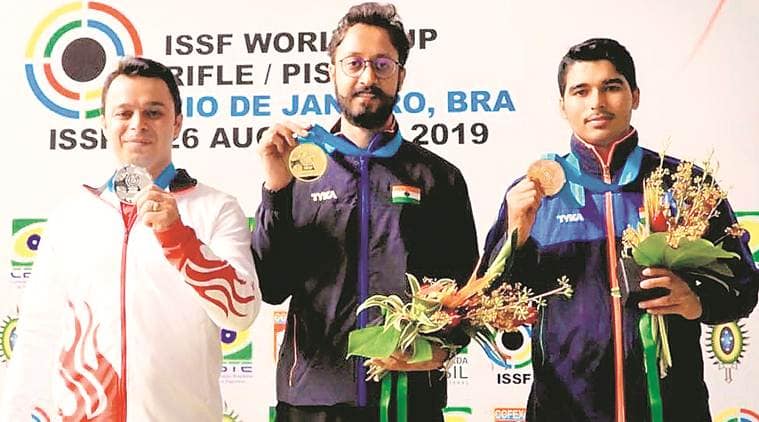 Abhishek Verma (middle) shot 244.2 in the eight-man final on Friday.

Before the final shot, which decided the gold medal between 30-year-old Indian shooter Abhishek Verma and Ismail Keles of Turkey in the 10m Air Pistol final, Verma was leading with a thin margin of 0.1. With Indian team foreign coach Pavel Smirnov watching, Verma took a deep breath and took his time before the last shot.

Keles had shot a 9.7. That meant Verma needed a score of 9.8 or more. He shot 10.7 to pocket the title. With Saurabh Chaudhary too winning the bronze medal, it drew a smile from Smirnov, who was seen rubbing his hands in anticipation before the medal round and the duo was hugged by the coach.

Post his maiden World Cup gold medal in Beijing in April this year, Verma had been spending time with his coach Omendra Singh at the Eklavya Shooting Academy in Gurgaon. He had been shooting with the score monitor being shut and Verma guessing to the coach later what he might have shot. It was the same in case of the final shot in Rio and Verma was quick to share about this quirk.

“I knew I had to concentrate and focus more on the last shot as the lead was only 0.1 point. I took my time to be stable and knew the shot would be close to 10.5. It came out to be a 10.7 and it feels special to win my second gold medal in World Cup. I have been practicing with the score monitor off with my coach at the Gurgaon range and the target was to concentrate more on my shots and also to be mentally able to have confidence in my shots. Beijing had additional pressure of bagging the quota place but this gold medal too came in a tough field and it will act as a huge motivation for me,” Verma told The Indian Express.

The previous three World Cups this year had seen an Indian champion in the event with Chaudhary winning the title in Delhi and Munich while won the gold in Beijing. The Indian pair looked to emulate their heroics of last year’s Asian Games final, where Chaudhary had won the gold and Verma a bronze, by shooting 584 and 582 respectively to qualify for the finals at the fourth and fifth spot.

In the medal round, Verma was the only shooter to shoot four scores in excess of 10 in the first series before a last shot of 9.4 which meant that he was tied with 2018 Munich World Cup gold medallist Omelchuk Oleh of Ukraine and 2016 World Cup final champion Damir Mekic of Serbia. At the end of second series, Verma shot into lead with 101.6 with only 0.1 point separating Verma and Mekic, and Mekic and Oleh.

Verma started the elimination stage as the only shooter recording two scores of 10 or more to leap into the lead, which he maintained till the last two shots. Before the last two shots, Verma led by 1.0 point but a penultimate shot of 9.4 would see a worried Smirnov before Verma sealed the deal with the last shot.

At Rio, Verma was shooting with a Morini Titanium pistol, the same pistol which he used in Asian Games and Beijing but with a new trigger mechanism. He got the trigger mechanism changed after struggling to deal with the loose grip. The grip on this pistol is a bit small as he has long fingers.

“We planned for the change post the Munich World Cup but I could not extend my visa. It means there is a small vibration when I shoot and there is a slight non-alignment. But I have practised to shoot with this pistol. I have also been spending time on meditation, where I listen to sounds, think about myself and to imagine my shots, which has helped me,” adds Verma, whose father Ashok Kumar is a district and sessions judge in Palwal. Verma trains with Chaudhary and the younger compatriot acts as motivation.

“In the final, I could hear people shouting loudly when Saurabh too shot a good score. In competition, such things often motivate both of us and seeing him shoot good scores also motivates me to shoot good. I also learn from his shooting and he does the same too,” adds Verma.

At the Gurgaon coaching range, coach Omendra knows his task for the one year ahead. “We have worked on his sighting technique and also increased his practice to 160-200 shots as compared to 140-160 shots daily. We made the trigger length short and added some extra weight to trigger as it suits his style of shooting. We will change the grip once he comes back.”