The current Narendra Modi government faced a similar situation as it decided to withdraw a guideline issued by the I&B stating that if a journalist is found to have created or propagated ‘fake news’, his or her press accreditation would be at risk of getting canceled. 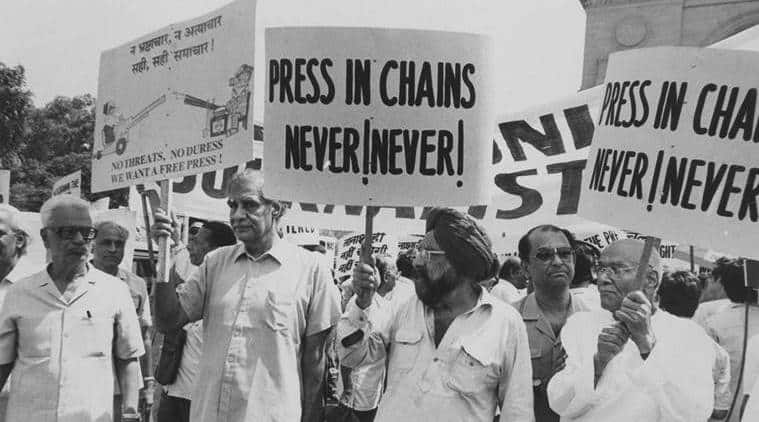 It was a decisive September afternoon in 1988 when a gloomy, yet composed looking prime minister, Rajiv Gandhi arrived at 7, Race Course road to attend an emergency Cabinet meeting he had hurriedly summoned. The ministers, completely unaware of the possible course of the meeting, were rather surprised by the prime minister’s statement that followed. Gandhi steadily informed his colleagues that he is considering the withdrawal of a bill his government had passed in the Lok Sabha less than a few months ago. In the next few moments, the decision was swiftly taken back and a press release signed by the prime minister stating, “A free press is an integral part of the inner strength and dynamism of our democracy. Without a free press, there can be no democracy. The imperishable values of our freedom struggle have gone into making the press in India. We uphold this legacy.”

Gandhi’s reinstatement of his belief in the freedom of press was a necessity of the hour, a moment created by unprecedented public pressure. A report published in the Economic and Political Weekly later went on to note that “it was for the first time since late Indira Gandhi’s return to power that a sizeable number of Congress(I) MPs have shown the courage to resist a measure dictated from the top.” It was a historic moment also because never before in the history of the Indian Republic was a piece of legislation passed in the Lok Sabha, later withdrawn on account of public pressure.

The current Narendra Modi government faced a similar situation on Monday as it decided to withdraw a guideline issued by the Information and Broadcasting Ministry stating that if a journalist is found to have created or propagated ‘fake news’, his or her press accreditation would be at risk of getting canceled.

At a time when the government, the press and the public are debating over the fake news menace on one hand and freedom of the press on the other, we are reminded of that infamous act three decades ago when the Congress administration attempted to curb the press but ultimately failed.

In July 1988, Gandhi had introduced what went down the pages of Indian history as one of the most draconian bills crafted by the Indian government. The defamation bill was a product of the prime minister’s desire to curb ‘criminal imputation’ and ‘scurrilous writings’. Allegedly, what pushed him to introduce the measure was a detailed coverage made by the Hindu and the Indian Express of the Bofors scandal that implicated several politicians of the Congress party, including the prime minister. “We will like them (the Press) to read the bill. We are totally convinced that the bill is needed. I am myself convinced that we are proceeding on the right line.” Gandhi had said in a press statement on September 4, 1988. However, what followed Gandhi’s assertion on the need for placing control over the media was a unified media and public outrage, of the kind never seen before. Leading journalists addressed public meetings in several cities, towns, and villages, educating the masses on the harmful impact of the bill. The introduction of the bill, in fact, bolstered their argument of a government involved in corrupt activities. The protest staged by the media was unified and strategic. In a detailed reportage of the events by journalist Prabhu Chawla, he writes about a strategy employed by journalists in press conferences held by cabinet ministers. At the start of a press conference wherein, a cabinet minister was invited, the senior most journalist would ask him of his opinion on the bill. If he evaded the question, all other journalists would walk out, causing great embarrassment to the minister.

But it was not just a unified media that jolted the Congress leader’s decision to withdraw the bill. Groups of lawyers, students, trade union members and intellectuals all came out on the streets to protest against the authoritarian move of the government. Most noteworthy, however, was the opposition of members within the Congress ranks itself. Most senior members of the Congress were resolutely against the bill. Interestingly, few MPs of the party collected signatures on a memorandum to be submitted to Gandhi, asking him to withdraw the bill. The mounting pressure on the prime minister was further strengthened by the elections looming in the near future. He finally relented, submitting to the mass outrage, thereby re-establishing the freedom of the press.

From denying existence of ‘hell’ to LGBTQ in churches, here’s why Pope Francis has raked up a storm