Durga Puja: The journey from a Zamindari status symbol to a nationalism project

Since the late 18th century, Durga Puja was a mark of status for the Bengali mercantile class before gradually becoming integral to the nationalism project to evoke the spirit of patriotic awakening among the sons of Bengal. 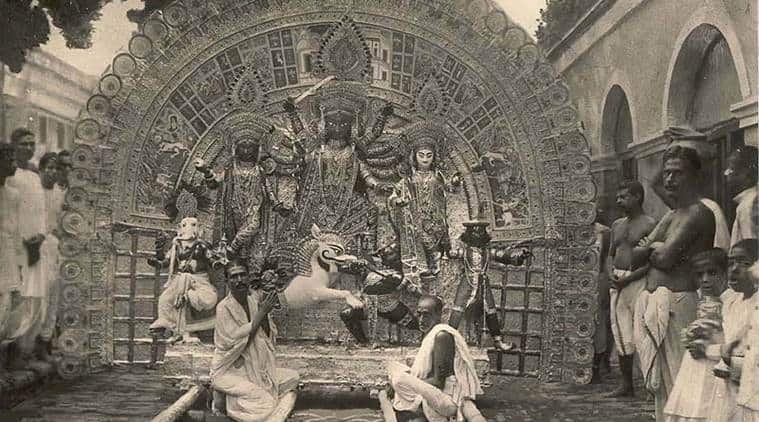 Since the late 18th century, Durga Puja was a mark of status for the Bengali mercantile class before gradually becoming integral to the nationalism project to evoke the spirit of patriotic awakening among the sons of Bengal. (Wikimedia Commons)

The sweet breeze of autumn brings forth with it the season of celebration in the Bengali heart as the East Indian state eagerly awaits the homecoming of Goddess Durga. The celebration of Goddess Durga, a ten days affair in Bengal, accompanied with merrymaking over food, drinks and cultural performances, is often highlighted as one of the prime examples of religion and secularism blending into each other quite peacefully.

But the secular context inherent in the worship of Durga is not hard to find if you look at the political evolution of the festival. Since the late 18th century, Durga Puja was a mark of status for the Bengali mercantile class before gradually becoming integral to the nationalism project to evoke the spirit of patriotic awakening among the sons of Bengal. In these historical moments, the aura of Goddess Durga had successfully been transferred from the religious to the public domain.

In recent years,a lot of scholarly attention has been turned towards explaining the non-Vedic roots of Goddess Durga. Kunal Chakraborty, one of the foremost historians to have worked on the subject has written that the accommodation of tribal deities into the Hindu pantheon through the Puranas, began from the 6th century onward. It is only from the 16th century on that we see Durga developing into a Brahmanical deity, whose worship as a public festival gains visibility from the 18th century on.

By the 17th and 18th centuries, as the Nawab in Bengal broke ties with the Mughal rulers, a class of Hindu zamindars arose in the region. This class of Hindu landowners became little rajas in their own right, controlling vast territories and exercising huge amount of control over their subjects. The local authority, however, was not always rewarded with adequate political power, which still lay in the hands of the Nawab. After 1757, when the English won Battle of Plassey and took control over Bengal, the political affiliation of the zamindars underwent a further shift. As noted by historian Tithi Bhattacharya, in this milieu of shifting and fluid political affiliations, there was perhaps a need for the zamindars to assert and display political authority, financial stability and administrative control over the ruled. The ostentatious celebration of Durga Puja helped the zamindars in asserting their influence in an era of drastic political and social change in Bengal. 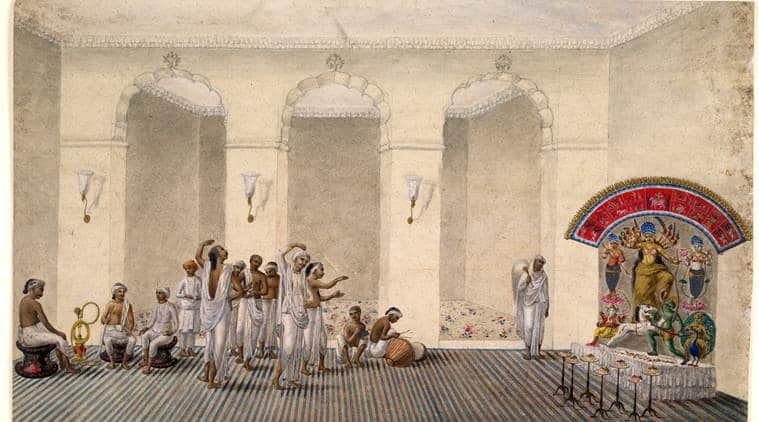 The ostentatious celebration of Durga Puja helped the zamindars in asserting their influence in an era of drastic political and social change in Bengal. (Wikimedia Commons)

Further, by employing the symbol of Goddess Durga in their efforts at establishing authority, the zamindars were trying to seek religious validation along with political influence. “The festivities around Durga and Kali were thus essentially drawing together two different kinds of identities- political and religious- but the boundaries of both were neither committed nor stable but open to overlaps, negotiations, and contingencies,” writes Bhattacharya.

The rise of the East India Company in Bengal was accompanied by the creation of a new urban space called Calcutta and the rise of a thriving mercantile class in the city, encouraged by the trade prospects there. The native merchants started working in close collaboration with the British as they were establishing themselves in the new city. Durga Puja celebrations became the perfect means through which this newly formed mercantile class asserted its financial influence, not just to the natives, but also to the British and other Europeans. 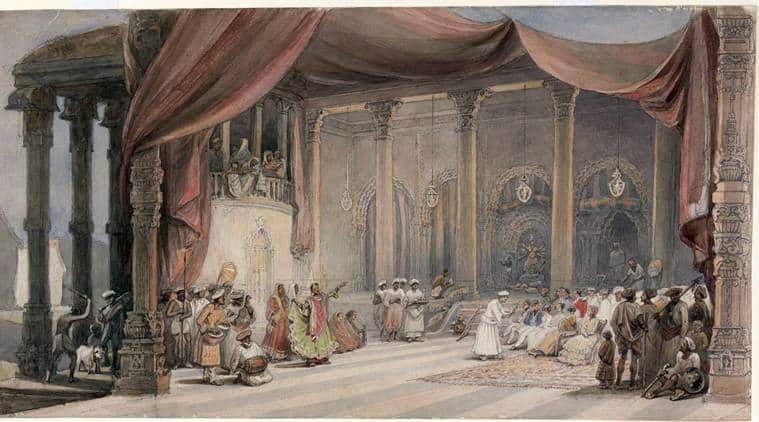 The close collaboration between the British and the Bengali mercantile class is also evident from the fact that the British in fact thoroughly enjoyed the Puja celebrations and also patronised them. (Wikimedia Commons)

There exists grand descriptions of the Puja in British accounts. There would be stiff competition among the influential merchants over the wealth on display in celebration of Goddess Durga. The Tagore family and the Gandhabanik family of Sibkrishna Da are two of the most prominent examples of extravagant Durga Puja celebrations accompanied with idols adorned in gold and imported precious stones. The Durga Puja celebration in the palatial house owned by Nabakrishna Deb in Shobhabazar has been documented in detail and continues to remain an annual event that attracts Kolkata inhabitants and tourists. Accounts of the Puja in the 18th and 19th centuries is noted to consist of about half a month of festivities, showcasing enormous wealth with dancing girls being hired from Murshidabad and Lucknow.

The close collaboration between the British and the Bengali mercantile class is also evident from the fact that the British in fact thoroughly enjoyed the Puja celebrations and also patronised them. As early as 1766, J Z Holwell, an employee of the East India Company, is noted to have written about the Puja that “the grand general feast of the Gentoos, usually visited by all Europeans (by invitation) who are treated by the proprietor of the feast with fruits and flowers in season, and are entertained every evening whilst the feast lasts, with bands of singers and dancers.”

Durga and the nationalist project

By the end of 19th century and beginning 20th century, the urban, mercantile character of the celebration of Durga undergoes a sudden shift. This was the time when the nationalist call to rise up in service of the nation could be heard echoing all across Bengal. Goddess Durga was invested with a very specific purpose in this process. The image of Durga was employed in the nationalism project in two ways. On one hand, she was looked upon as the symbol of strength and divinity, who would rescue the nation from the difficult times it was going through. On the other hand, she was looked upon as the embodiment of the nation itself, rescuing her, being the prime responsibility of her sons.

One of the first instances of association between the nation and the Goddess is Bankimchandra’s celebrated novel, Anandmath, written in 1882, which made ‘Bande Mataram’ the most popular battle cry of nationalism. By the turn of the century, the Bengali press was loaded with a large number of patriotic songs and plays that drew upon the image of Durga in association with the nation.

Also read: A history of the origins of the Vande Mataram and its journey thereafter

In early 20th century, when the Lord Curzon-ed government tightened control over the education system, leading to further economic disempowerment of Indian, several press statements called upon Goddess Durga to rescue the nation from English mismanagement. The lead article on Durga Puja for 1903, the journal Bengalee stated that the Durga image was “the emblem of our Indian nationality, not as it is but as it should be.”

“Save thy suffering children, for life to them is an eternal anguish, save them from famine, from..pestilence, from…misery….and teach them, O Dread Mother, above all things, teach them to be men,” said the article. The celebration of Durga Puja in Bengal underwent its most significant shift when the partition of Bengal was announced in 1905. The festival was found perfect to be utilised in the Swadeshi campaign. Historian Rachel Fell McDermott notes in her work that “Bengali-owned papers of the period were full of advertisements for the Poojahs, nothing bideshi, everything swadeshi.”

In the 1920s, faced with Gandhi’s call to abolish untouchability, several Bengali Hindu leaders called for religious celebrations embracing everyone, from whatever caste or class background. Thereafter in 1926 the concept of the sarbajanin or universal Puja was born that was open to everyone regardless of birth or residence. The first such Puja was called the “Congress Puja” and was organised in Maniktala in north Calcutta. 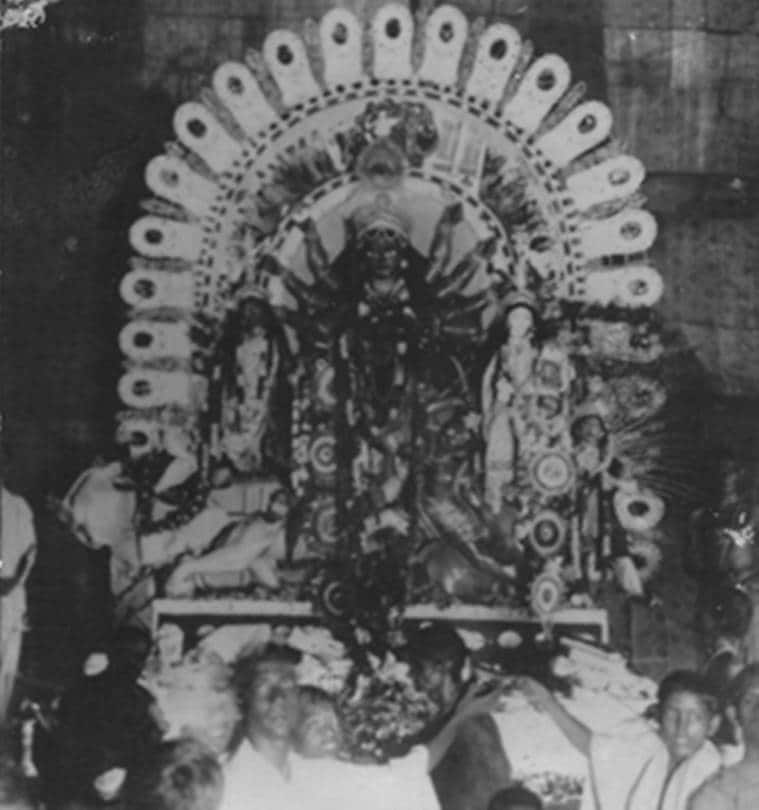 In 1926 the concept of the sarbajanin or universal Puja was born that was open to everyone regardless of birth or residence. The first such Puja was called the “Congress Puja” and was organised in Maniktala in north Calcutta. ( www. simlabyayamsamity.com)

The popularity of the symbolism attached to Durga Puja among the nationalists is also documented by the fact that even when in jail, several of them expressed their patriotism by demanding the right to perform Durga Puja. One of the finest examples of this is when the extremist leader Subhash Chandra Bose celebrated Durga Puja in Mandalay jail in September 1925. After the Puja he is noted to have written a letter to his friend stating that “The Divine Mother is being worshipped today in many a Bengali home. We are fortunate enough to have her in prison also.”

Today as Bengal, and the Bengali community all over the world celebrates Durga Puja in its familiar carnivalistic spirit, devoid of the usual religious sentiments attached to the worship of most other deities in India, it is important to keep in mind that the celebration of Durga, for generations has been far more than a spiritual and religious affair.