Black Death: How Jews were blamed for the plague and massacred

What was a medical phenomenon soon turned into a socio-political one, with many chroniclers struggling to decide if more Jews died due to the plague or the persecutions against them. 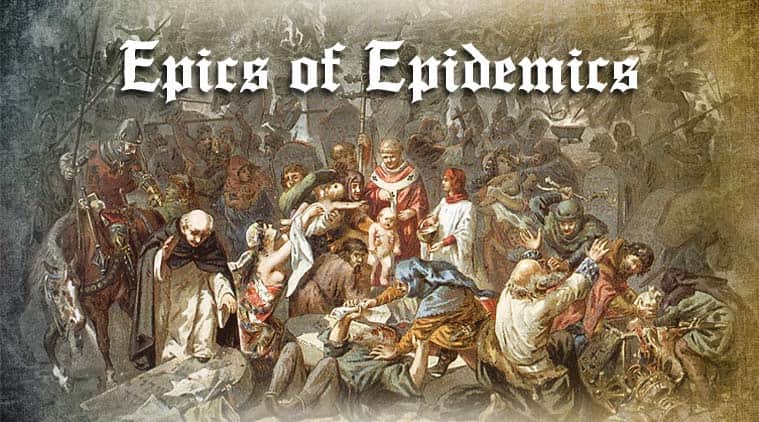 Many would say the Covid-19 outbreak may change forever the world as we have known it till now. Power structures may be shifted, economic systems remodeled, along with significant changes in the way we touch, behave, and breathe. With the number of cases continuing to surge and the prospect of a vaccine still distant, we are yet to see the impact that the virus will play out in times ahead. Lessons from the past though can provide some insight into what lies ahead.

In this five-part series, Indianexpress.com will chart out how major epidemics of the past have altered the course of history in the world. Each of these began as a biological phenomenon, but soon turned into economic, social, or political ones. Loss of lives and livelihoods had followed, distress and despair experienced, and yet despite the scale of devastation, the human race made peace with its surroundings and came out victorious. The message was, and still remains the same- there is hope!

By the spring of 1349 CE, the devastating Bubonic plague, more popularly known as the ‘Black Death’, had swept through large parts of the European continent. At Strasbourg, a city located at the border between France and Germany, a couple of thousand Jews were rounded up and brought to a cemetery, where a wooden platform had been built. The Jews were then given an option to either convert to Christianity, or be burnt alive. What followed was a spectacle, largely ignored by the pages of history. Barring those who chose to be baptised, children and those women considered attractive, the remaining were slowly burnt alive.

“Everything (all debt) that was owed to the Jews was cancelled… The council…took the cash that the Jews possessed and divided it among the working-men proportionately,” wrote Jakob Twinger von Konigshofen, the German chronicler who witnessed the massacre. “The money was indeed the thing that killed the Jews. If they had been poor and if the feudal lords had not been in debt, they would not have been burnt,” he added, remarking upon the financial motive of the act.

Also read- The first plague in history ended the Byzantine empire, was considered an act of God

Money may well have been one of the factors that caused an angry mob to rise up against the Jewish residents of the city. What sparked the furore though was a rumour, that somehow spread through the continent, of Jews poisoning the wells of Christians, leading to their widespread suffering and loss of lives. The science behind the plague was yet to be documented, its spread and the destruction it caused mostly misunderstood. In the panic that arose, the ‘wrath of God’ and mischief of the ‘other’ were the most plausible reasonings to the medieval man. What was a medical phenomenon soon turned into a socio-political one, with many chroniclers struggling to decide if more Jews died due to the plague or the persecutions against them.

A long history of anti-semitism

A sentiment of hostility against Jews dated back to the beginning of the Common Era, when they were blamed for being the murderers of Christ. Despised for not accepting Catholic doctrines, they were singled out, restricted and murdered in many parts of Europe. By the 11th century, anti-semitism grew in its ferocity, as Christianity gained a stronghold all across Europe. Even though, officially, the Jews were protected by the state, unofficially they were seen as scapegoats for every big and small problem. “Christians considered Jews the enemies of Christianity and blamed them for illness, bad luck, and even bad weather,” writes author Diane Zahler in her book, ‘The Black Death’.

In 1290, the King of England expelled all Jews, and the French king did the same in 1322. Wherever they did reside, Jews were forbidden from most forms of service, including those in the government and army. They were restricted from holding land or working as merchants and artisans. The only form of service available to them was that of money lending, which was banned in Christian teachings. As money lenders, Jews acquired wealth, thereby attracting the wrath of Christians further, thereby resulting in widespread communal violence against them. 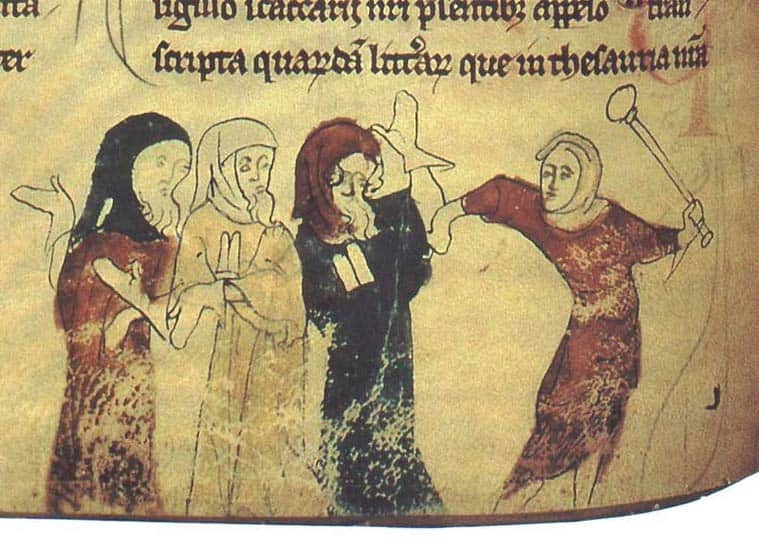 When the plague arrived in 1348, the soil was ripe for putting the blame of the destruction it caused upon the Jews. “From 1348 to 1350, wide groups of people faced the plague with little hope and turned inwardly against the self in ceremonious expiation, or outwardly beyond society to God or against the outsider-the beggar, the foreigner, and the Jew,” writes historian Samuel K. Cohn, in his article, ‘The Black Death and the burning of Jews.’

The first instance of Jews being accused of the Plague was in 1348 in the southwestern French province of Dauphine where a rumour spread of them poisoning wells and fountains used only by the Christians. Soon after, the rumours spread across to parts of what is modern day Germany, Spain, France, and Switzerland. Several Jews were arrested, and under torture, admitted to the accusation of poisoning wells.

Most contemporary writers and chroniclers too showed no sympathy for the Jews. The German chronicler Michael de Leone is noted to have agreed to accusations against the Jews and wrote, ‘the Jews deserved to be swallowed up in the flames’. “Instead of recording the cries of women and children as they were thrown into the fires, chroniclers such as the ‘World Chronicler’ of the monastery of Albert in Cologne stressed the ‘horrible means by which the Jews wished to extinguish all of Christendom, through their poisons of frogs and spiders mixed into oil and cheese,” writes Cohn.

The mass burning of Jews

The first massacres took place in the French city of Toulon. “The Jewish quarter was sacked and forty Jews were murdered in their homes,” writes historian Anna Foa, in her brilliantly evocative book, ‘The Jews of Europe after the Black Death’. Similar episodes of uncontrollable mob violence broke out in Barcelona and other Catalan cities soon after. By 1349, episodes of mass murdering of Jews broke out at Erfurt in Germany, Basel in Switzerland, and at Aragon in modern day Spain.

In several cases, the massacres took place even before the plague arrived, like that in Strasbourg. The casualty record of these exterminations ranged from anywhere between a few hundreds to thousands. “In spring 1349, the large Jewish community at Frankfurt-am-Main was destroyed, followed by those in Mainz and Cologne,” writes historian Robert S. Gottfried, in his book, ‘Black death’. He adds that there were more than 3000 Jews at Mainz in Germany, probably the wealthiest of all of the Northern European Jewish community. In the wake of the plague, all of them were killed. 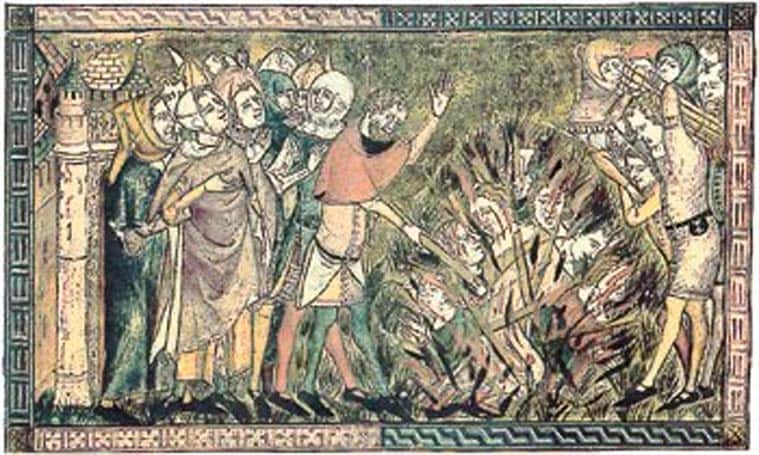 In several cases, the massacres took place even before the plague arrived, like that in Strasbourg. (Source- Wikimedia Commons)

The Papacy did come out with statements in defense of the Jews. “Pope Clement VI, seems to have risen above the hysteria, seeing the violence against the Jews as irrational and dangerous to Christian society,” writes Cohn. He issued a papal bull in September 1348 stating that Jews were dying in numbers as great as the Christians and that they would not be so stupid so as to poison themselves. It also stated that the Plague was also killing Christians in parts of Europe where no Jews existed. However, the public sentiment against Jews had hardened beyond repair.

Also read- Suits of Sickness: How pandemics afflicted fashion over the centuries

“By 1351, 60 major and 150 smaller Jewish communities had been extirpated, and over 350 separate massacres had taken place,” writes Gottfried. The Black Death resulted in the Eastward migration of the Northern European Jewish communities to countries like Poland and Russia where they remained for the next almost six centuries.