Armenia-Azerbaijan conflict: A USSR relic simmering for a century

With the collapse of the USSR in 1991, the conflict over Nagorno Karabakh only grew bigger and has been raging ever since. For almost four decades, Armenia and Azerbaijan have been battling over a piece of land situated in the mountainous region of south Caucasus. The dispute over Nagorno Karabakh that began in 1988 has over the years caused massive human rights violations, a severe refugee crisis and impacted the economies of both the Transcaucasian republics. The issue flared up once again this week, resulting in more deaths and destruction.

In scale and scope, the ongoing conflict between Armenia and Azerbaijan exceeds anything the region has seen in the past 40 years. Reportedly, close to a hundred lives have been lost between civilians and Armenian combatants. Azerbaijan is yet to release data on its military losses.

South Caucasus expert Laurence Broers, in an article in the BBC, notes that the current crisis is vastly different from the ones before since previous disputes have been contained within a few days. “The intensity of the current fighting indicates that it might not be possible this time,” he writes. Further, there is a possibility of increased involvement by international powers, risking it to become a wider regional war.

Also read: Why India is special to Armenians: Their land of prosperity

The roots of the conflict go back much further, into the early decades of the twentieth century when the newly formed Soviet Union drew out borders and created well-defined national territorial units among the diverse ethnic population of the USSR. “The question of their territorial boundaries never arose in the face of the ruthless dictatorship under Stalin, nor did it emerge as a worthwhile issue during subsequent leaderships,” writes political scientist P L Dash in his article ‘Nationalities problem in USSR: Discord over Nagorno-Karabakh’ published in 1989. He adds that it was the policy of ‘glasnost’ (allowing openness and transparency in government institutions) begun by former Soviet presiden Mikhail Gorbachev in the final years of the Soviet Union that brought the territorial dispute into the limelight. With the collapse of the USSR in 1991, the conflict over Nagorno Karabakh only grew bigger and has been raging ever since.

The role of the Soviet Union

History and ethnicity are two factors that play the biggest role in the present conflict between Armenia and Azerbaijan. The Azeris claim the Nagorno-Karabakh region has been under their rule in known history. The Armenians hold the opinion that Karabakh was part of a great Armenian kingdom as far back as the fourth century BCE. The issue is further complicated by the fact that the region changed hands across multiple dynasties and came to be occupied by varied ethnic communities in the course of the following centuries. At present, the region consists of a majority Armenian Christian population. However, it is internationally recognised as de jure part of predominantly Muslim Azerbaijan.

In 1823, the mountainous region came under the occupation of the Russian empire under Tsar Nicholas I. Under the Tsarist regime, the area was renamed as Shushenskiy Uyezd. The status of the region changed once again after the October Revolution of 1917. “From the enemy hold, the area returned to Soviet power in 1920. On July 7, 1923, the Shushenskiy Uyezd was renamed Nagorno-Karabakh and retained within the Transcaucasian Soviet Federated Socialist Republic, which then consisted of Armenia, Azerbaijan and Georgia and had joined the USSR when it was formed,” writes Dash. 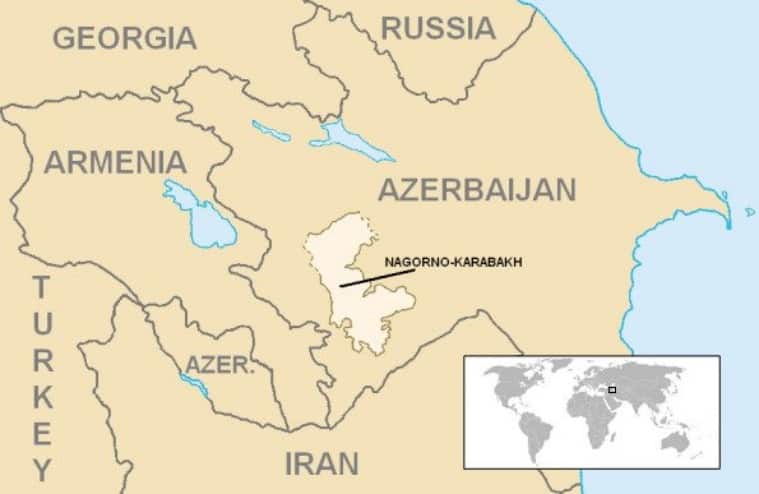 At present, the region consists of a majority Armenian Christian population. However, it is internationally recognised as de jure part of predominantly Muslim Azerbaijan. (Wikimedia Commons)

When the Transcaucasus regions joined the USSR, the borders between these three countries were not determined. The early 1920s saw a fervent political struggle for Karabakh between Armenia and Azerbaijan in the Soviet Union. It took the USSR three years to settle the issue. Initially, in December 2, 1920, Joseph Stalin, as people’s commissar of nationalities, made the decision to include Karabakh in Armenia and it was agreed upon by Azerbaijan as well. However, later they refused and Stalin, under Turkish influence, redrew the border plan.

“On March 16, 1921, a treaty between republican Turkey and the Soviet Union determined that both the regions were to be under the authority of the Azerbaijani Soviet Socialist Republic,” writes policy and security expert Svante E Cornell in his research paper, ‘Undeclared war: The Nagorno-Karabakh conflict reconsidered’.

Turkish role in defining the border of Nagorno-Karabakh was significant. To begin with, in the 1920s, USSR saw the nascent Turkish republic as a potential ally given the similarity in the historical developments of both the republics and the hostility they both shared with western powers. “Attaturk was hostile to any territorial arrangements favouring Soviet Armenia, since a strong Armenia could have potential territorial claims on Turkey,” writes Cornell.

Moreover, Armenia had shown no mentionable communist tendencies in the years of the Russian revolution. “Given Stalin’s tendency to divide the Caucasian people in order to prevent unified resistance, the idea of separating the Armenians into two entities- the Armenian republic and the Nagorno-Karabakh- must have been welcome,” explains Cornell.

Since 1922, the Narango-Karbakh region has remained part of Azerbaijan, but was given a substantial amount of autonomy. Armenia has, ever since, consistently attempted to reverse the decision.

“The common complaint of the Armenian population in Nagorno-Karabakh is that their culture has been stifled by the Azerbaijani authorities,” writes Dash about the ethnic complexities this setup has given rise to. “Their language is dying; it was not being taught in schools. There was little scope for any cultural entertainment or national Armenian art shows. Their religion was different.” Consequently, the Armenian population thought that their culture could be saved through a merger with neighbouring Armenia.

The final days of the USSR

The conflict between the two nations erupted into a full-blown confrontation in the final days of the USSR. Large scale demonstrations carried out by the Armenian population in favour of being reunited with Armenia became an everyday occurrence since the latter part of 1987 and more so in 1988 when they drew in thousands of people. “In August (1987) a petition signed by more than 75,000 Armenians were sent to General Secretary Gorbachev, pleading for the Soviet leader to reattach ‘mountainous Karabakh to socialist Armenia,” writes Central Eurasian studies expert, Michael P. Croissant in his book, ‘The Armenia-Azerbaijan Conflict: Causes and Implications’, published in 1998.

A milestone event in the conflict took place on February 20, 1988, when the Soviet of People’s Deputies of Nagorno-Karabakh passed a resolution by a vote of 110-17 requesting the oblast’s transfer to the Armenian republic. The Soviet authorities responded to the request stating that “revising the existing national and territorial structure contradict the interests of the working people in Soviet Azerbaijan and damage inter-ethnic relations.” The response was met with huge disappointment among the Armenians and huge demonstrations and violence followed.

Azeri spirits ran high as well since they sensed a loss of territorial integrity caused by Soviet policies. “In the eyes of the Azeris, the Communists had allowed the Nagorno-Karabakh issue to drag on into November when the problem had become clear in February, failed to fulfil the tenets of the Soviet constitution requiring the protection of inter-republican borders, and allowed the publishing of one-sided reports in the media ignoring the position of Azerbaijanis living in Armenian SSR,” notes Croissant.

With growing Azerbaijani and Armenian nationalism, reports of displacement, bloodshed and ethnic cleansing started coming in from both sides. 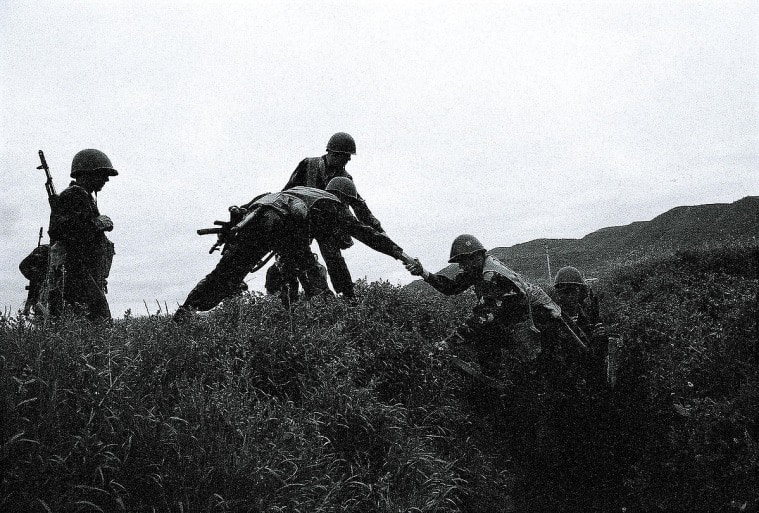 Nagorno-Karabakh Republic (NKR) soldiers from the 8th regiment are rushing out of a trench during operation. (Jonathan Alpeyrie/Wikimedia Commons)

In December 1991, the Soviet Union ceased to exist. “For the first time in 70 years, the antagonism between Armenia and Azerbaijan was no longer an internal matter of the USSR; the clash instead became an affair between two ostensibly sovereign members of the international community,” writes Croissant. What this meant was that rivalries among leading regional powers like Russia, Iran, and Turkey which had affected Transcaucasus history for years, was reawakened, bringing in new complexities to the conflict.

In May 1994, Russia mediated a ceasefire between the two countries, but the conflict refused to die down and simmered on for the next three decades with occasional instances of ceasefire violations and violence.

Fresh violence broke out in July this year, resulting in the deaths of 18 persons including a civilian. It appears that the Armenian force’s move to establish a new post beyond their previous line of control is what caused the outbreak of clashes in July. With leaders of both countries busy with the ongoing pandemic situation, the conflict was not tackled with and flared up once again this week. 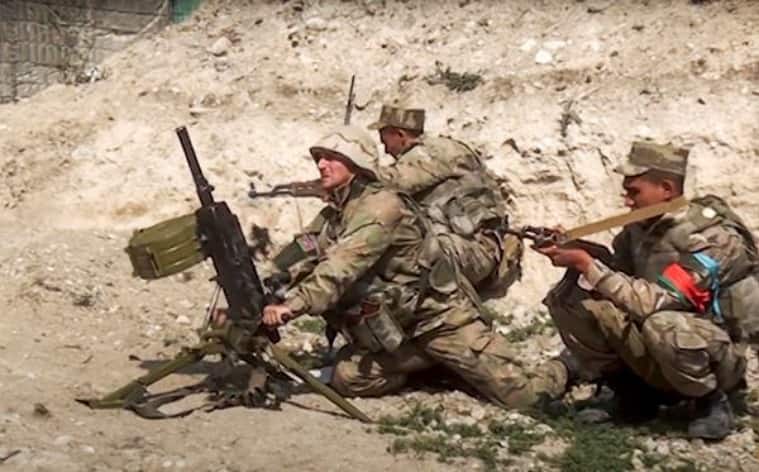 The occasional outbreak of violence between the two countries is not new and it remains to be seen how the international community reacts to it. However, defence and policy experts are closely watching the turn of events the new cycle of conflict leads to.

As Broers explains in his analysis written for the Moscow based think tank, ‘Valdai discussion club’: “ Each new round of Armenian-Azerbaijani violence tests the fragile balance of forces in the region, and by implication the constraints on a major new war between Armenia and Azerbaijan.”

Nationalities problem in USSR: Discord over Nagorno-Karabakh by P.L. Dash

The Armenia-Azerbaijan Conflict: Causes and Implications by Michael P. Croissant

What is OnePlus World?