From George Bush to Donald Trump: How US policy towards Syria has evolved

Trump’s decision to attack the Syrian base today can hardly be seen in tune with the overall structure of foreign policy maintained by America towards the country. In a move significantly departing from his earlier stance on Syria, US president Donald Trump ordered a missile strike on a Syrian airbase on Friday, in response to a deadly chemical attack suspected to have been launched by the Bashar al-Assad led government a day back.

The ongoing civil war in Syria has come a long way since it took roots in 2011 and has, at different phases called for varying set of foreign policies, not just towards the concerned country, but rather the entire Middle East. The civil war in Syria has had far reaching implications throughout the world, in the form of a drastic immigration crisis, the establishment of radical terrorist organisations in the Middle East and the fear of humanitarian violence that spread across the globe.

The multiple pronged struggle currently going on in Syria, with the Assad regime on one end, the rebels at another and the radical Islamist forces at yet another end, has been at the receiving end of the wrath and sympathy from almost all of the global powers depending to a large extent upon the political benefits that each could derive from the region. American policy towards the Syrian trouble has been particularly significant, for several reasons foremost being the hegemonic influence the country has tried to maintain in the Arab region for decades now, to the extent that the current crisis in the continent is seen as being almost a byproduct of American aggression.

But Trump’s decision to attack the Syrian base today can hardly be seen in tune with the overall structure of foreign policy maintained by America towards the country. Trump had fervently decided to not make humanitarian interventions in the US, but rather focus on uprooting Islamic terror groups for the sake of avoiding terror attacks on American soil. However, the recent act of aggression seems a volte face, as reports mention his change of stance being a response to the kind of deplorable suffering of the victims of the chemical attack. For that matter, America’s response to Syria, particularly under the administration of the last two presidents have seen significant shifts over time, depending on the political necessities of the moment. In order to understand what Trump’s sudden change of heart could mean, we reflect upon the evolution of American policy towards Syria since the governance of George W Bush.

Analysing the Bush government’s policy towards Syria, political scientist Jülide Karakoç calls it a case of “indirect orientalism”, by which she means that the US maintained favourable positions against certain players in the Middle East- Turkey, Israel and Saudi Arabia- so as to impose a position of power upon the rest of the Arab region. Accordingly, while Israel was held up as a model of western values, Syria was seen as a backward and radical power. The most important document supporting this attitude was the Syria Accountability and Lebanese Sovereignty Restoration Act (SALSRA), that imposed several sanctions upon Syria so as to halt the sponsor of terrorism and giving up on weapons of mass destruction, apart from asking the country to hold unconditional negotiations with Israel. 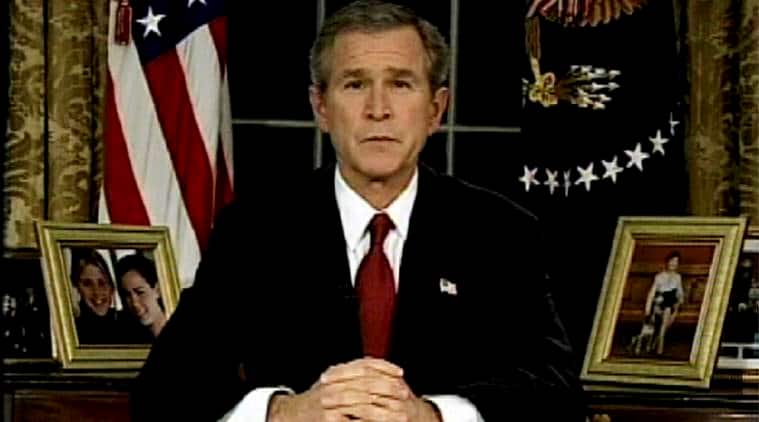 The most radical step towards a Syrian policy came in the aftermath of the 9/11 attacks when the US launched a ‘war on terror’, categorising certain states of the Middle East, including Syria and Iraq as ‘rogue states’ that sponsored terrorism. The Bush policy towards Syria was to isolate it from its neighbours. When under his administration, America invaded Iraq in 2003, it left behind a country caught in sectarian bloodshed and ripe for the growth of radical Islamic organisations that would go on to be the creators of some of the biggest cases of havoc in the region.

American invasion of Iraq in 2003 had resulted in the government being met with severe criticism, both from internal and external players. When Barack Obama took over the administration in 2008, he had before him the popular demand to end the aggression in Iraq and Afghanistan. For the ordinary American the wars had cost them their tax money and the lives of the soldiers.

Thereafter when the Syrian crisis began in 2011, while the American president understood the humanitarian necessities to intervene, he remained firmly resolved to not respond with military aggression. He was aware of the economic and human costs that the war would entail. His decision was further backed by the United Kingdom and Germany. 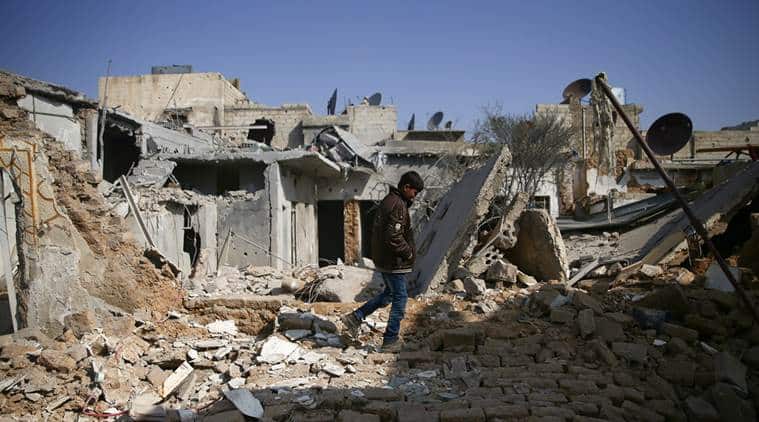 However, in 2012 Obama made a strong remark when he warned the Assad administration of a change in American policy if he crossed the ‘red line’ by using chemical or biological weapons. Soon after, the Assad regime did infact engage in a chemical attack, resulting in America contemplating a response involving military powers. However, on being advised against such a move by the Congress, Obama refrained from going down that road.

However, in 2014, the former president did in fact decide to intervene in Syria, but not against the Assad regime, rather to uproot the radical Islamic rebel group, ISIS. The change in position came after the public release of two videos depicting the beheading of American journalists by ISIS agents. The following three years America continued with its war against the organisation in Iraq and Syria through bombings from aircrafts and missiles fired from warships. While Obama has, right from the beginning been against the Assad regime and supported the rebel forces, when he did decide to intervene in the Middle Eastern state, it was a means to end the calamity caused by a radical rebel group. His decision was seen as a response to humanitarian necessities and a way to keep away terrorism from American shores. Nonetheless, post his presidential tenure, Obama has consistently been on the receiving end of criticism for being unable to sort out the situation in Syria.

When the Obama administration attacked Syria in 2013, Donald Trump tweeted out a sharp criticism against the move. “”What I am saying is stay out of Syria. The only reason President Obama wants to attack Syria is to save face over his very dumb RED LINE statement. Do NOT attack Syria,fix USA,” said Trump back in 2013.

What will we get for bombing Syria besides more debt and a possible long term conflict? Obama needs Congressional approval.

The only reason President Obama wants to attack Syria is to save face over his very dumb RED LINE statement. Do NOT attack Syria,fix U.S.A.

If Obama attacks Syria and innocent civilians are hurt and killed, he and the U.S. will look very bad!

What I am saying is stay out of Syria.

AGAIN, TO OUR VERY FOOLISH LEADER, DO NOT ATTACK SYRIA – IF YOU DO MANY VERY BAD THINGS WILL HAPPEN & FROM THAT FIGHT THE U.S. GETS NOTHING!

AGAIN, TO OUR VERY FOOLISH LEADER, DO NOT ATTACK SYRIA – IF YOU DO MANY VERY BAD THINGS WILL HAPPEN & FROM THAT FIGHT THE U.S. GETS NOTHING!

President Obama, do not attack Syria. There is no upside and tremendous downside. Save your “powder” for another (and more important) day!

When he took over the role of the American president he was firmly resolved not to intervene against the Assad regime on humanitarian grounds. His position was also affected by the fact that Russia, who Trump favours, has been in support of the Assad regime. 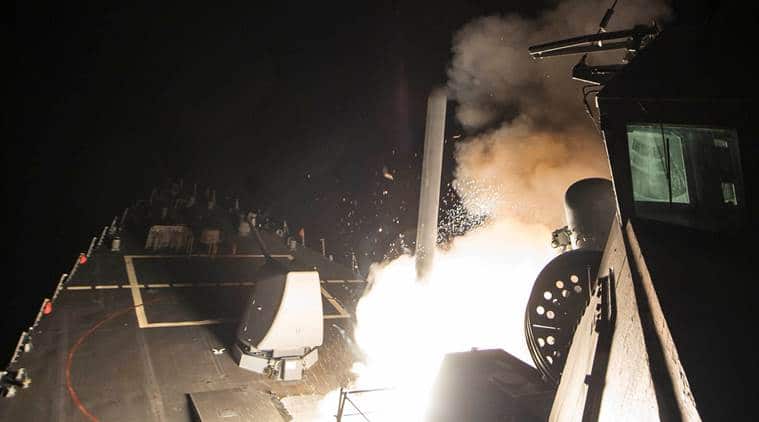 If at all Trump would intervene in Syria, he maintained it would be against the ISIS for the sake of protecting America from terrorist activities. However, when the chemical strikes did take place in Syria a day back, he was quick to criticise the Obama administration for being weak and irresolute in their response to Assad. “President Obama said in 2012 that he would establish a ‘red line’ against the use of chemical weapons and then did nothing,” said Trump. Soon after he launched the missile strike on Syria, marking a huge drift from his initial foreign policy. As per his address to the nation, his decision to attack the Syrian air base comes in response to the huge humanitarian crisis created by Assad there. “Syrian dictator Bashar al-Assad launched horrible chemical attack on innocent civilians. Assad choked out the lives of helpless men women and children. It was a slow and brutal death for so many, even beautiful babies. No child of god should ever suffer so much,” said Trump.

Interestingly, however, reports suggest that Russia was intimated about the attack beforehand, suggesting Trump’s efforts at maintaining relations with the East European power who has been favourable towards Assad. The shift in Trump’s policy, keeping Russia by its side is a major development in global policy towards the Assad regime. What it means for Syrian civilians, rebel groups and the government in future, only time will tell.

Ajay Devgn on Shivaay’s National Award win: Not surprised, it is well deserved