In Mahabharata, when the Pandavas and their family were going to the war, the entire family prayed for their welfare and protection. Draupadi tied a sacred thread on the hand of Lord Krishna and Kunti tied it on the hand of her grandson, Abhimanyu. 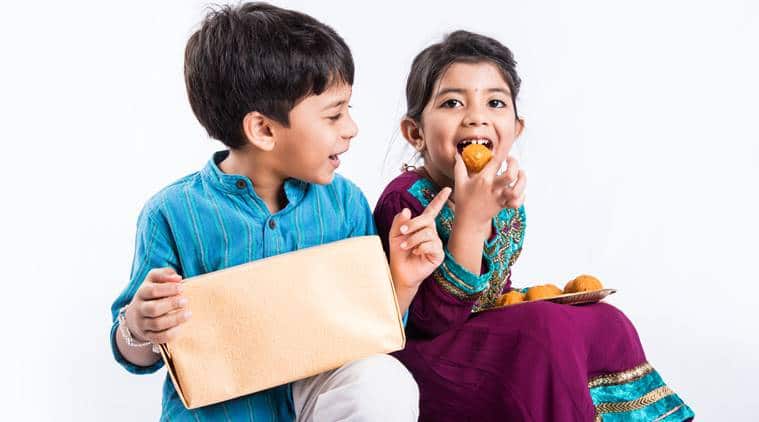 Raksha Bandhan 2018: Know how the day came into being. (Source: Getty Images/ Thinkstock)

Rakshabandhan represents the sacred bond shared between brothers and sisters, where one promises to protect the other. The festival, more popularly known as “Rakhi”, is celebrated all over the world and is not only limited to the Hindu community. People of all faiths celebrate it and it is one of the major festivals of India. The festival of Rakshabandhan falls on the day of Shravan Purnima i.e. the full moon day of the month of Shravana. This year, Rakshabandhan is on Sunday, 26th of August, 2018.

Etymology of the word Rakshabandhan

Therefore, the Sanskrit word Rakshabandhan means an affectionate bond of protection, the sweet relationship of trust between a protector and the protected.

There are numerous interesting stories associated with the festival of Rakshabandhan. You will be surprised to know that this festival has a scriptural background.

# According to Bhavishya Purana, the wife of Indra, Sachi, consulted Lord Vishnu during the fierce battle between Indra and Bali Maharaja. Lord Vishnu gave her a Raksha sutra i.e. a sacred protection thread and asked her to tie it on the hand of her husband, after which he shall become invincible in battle. Thus, Lord Indra was victorious over Bali and regained his celestial kingdom, Amravati.

# According to Vishnu Purana, after asking Bali Maharaja to go to Sutala loka, Lord Vamanadev promised him to be his gatekeeper. Since he went away from Vaikuntha, Devi Lakshmi began to miss her husband. She went to visit Bali Maharaja and tied a sacred thread on his hand and accepted him as her brother. In return, he promised her to grant her a boon. She asked him to let her serve her husband in Vaikuntha; to which Bali Maharaja agreed.

# In Mahabharata, when the Pandavas and Kauravas were at war, Draupadi tied a sacred thread to Lord Krishna’s hand  and Kunti tied it on the hand of her grandson, Abhimanyu.

The festival of Rakshabandhan is celebrated all over the world, across various countries having Hindu communities. There are some places where the people of different faith also celebrate this festival, which shows the essence of the festival coming true in practice.

There have been numerous instances in history, when the people tied sacred threads on the wrist. The wife of Alexander-the-great, Roxana sent a rakhi for Maharaja Porus, the mightiest king of that time in order to request him, not to harm his husband on the battlefield and being a true warrior Kshatriya, he accepted the request.

Rabindranath Tagore promoted the concept of rakhi amongst the Hindu and Muslim communities during the time of British Colonial Era in order to unite them against the British.

On this day, sisters visit their brothers and tie rakhi on their right wrist and put tilak on his head. She prays for the longevity and prosperity of her brother, who in return, pledges to protect her and gives her some gift in return.

Nowadays, the festival of rakhi has expanded its boundaries from sisters and brothers and has emerged out as a wide sphere, where people tie rakhi to each other, expand their relationships and promise to give them all protection.

The timings for Rakhi tying ceremony for Rakshabandhan on 26th August, 2018 are as follows: