Mulayam Singh Yadav brazenly said those concerned about crimes in UP should stay in Delhi. 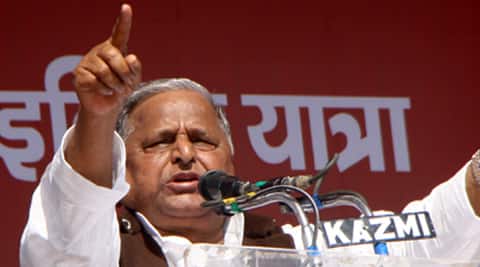 Mulayam Singh Yadav brazenly said those concerned about crimes in UP should stay in Delhi. (Express Archive)

Despite widespread criticism, the Uttar Pradesh government and Samajwadi Party leaders have remained defiant over the inaction in connection with the rising cases of rapes in the state. A day after Chief Minister Akhilesh Yadav suggested people to Google about such crimes in other states, his father and Samajwadi Party Chief Mulayam Singh Yadav brazenly said those concerned about crimes in UP should stay in Delhi.

When reporters questioned the veteran politician about the issue of Badaun gangrape, he advised all those worried about the incident to stay in Delhi. He further targeted the media for reporting only about crimes in Uttar Pradesh and ignoring those in other states.

However, her daughter-in-law Dimple Yadav assured mediapersons that the Akhilesh government in Uttar Pradesh was taking the issue seriously and working towards it.

“This is a very important and sensitive social issue. We take this very seriously and the culprits must get stringent punishment. Our government is working towards it,” said Dimple.

The Central government was quick in reacting to the remark of the Samajwadi Party chief, accusing the UP government of “protecting rapists”. Talking to mediapersons, the Union Water Resources Minister alleged that UP government was the only government which protected rapists and gave statement in their favour. She added that the issue would be raised in parliament as well.

“The government in UP provides protection to rapists, and give statements in their favour. All political parties must think about this. And this issue will be raised and discussed in Parliament,” said Bharti.

This comes after Uttar Pradesh Chief Minister Akhilesh Yadav claimed that criminal cases of UP alone were being purposely publicised by the media. Citing law and order incidents of Bangalore, Madhya Pradesh, Rajasthan, he asked the mediapersons to “google search” those incidents as  well.

“An incident took place in Bangalore, did it come to national limelight? Cases are happening in Madhya Pradesh also. I came to know a Minister’s relative’s chain was snatched  near her house. Even incidents took place in Rajasthan. But it is only those in UP that are purposely highlighted more and even more by cunning people.”

The Chief Minister also claimed to have taken all the possible steps in the Budaun rape case.

Quick to come to his defence was his uncle and senior Samajwadi Party leader Ramgopal Yadav, who claimed that when relationship between girls and boys come out, it is termed as rape.

“In many places, when the relationship between girls and boys come out in open, it is termed as rape. In many places, girls and boys are ready (to marry) but honour killings take place. The most saddening and serious thing is that such incidents are not stopping. These incidents happen in other places also but are not highlighted,” senior SP leader Ramgopal Yadav said.