All for show in the show-for-all? Mamata Banerjee public outbursts not new, Oppn flays ‘gimmick’ 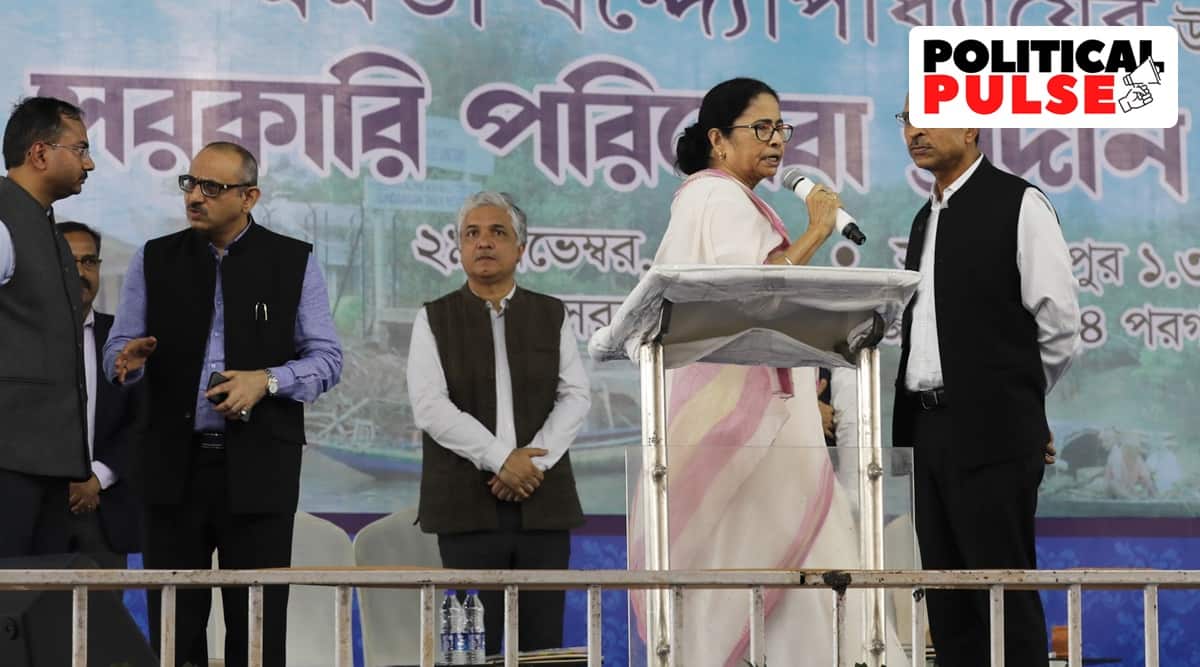 West Bengal Chief Minister Mamata Banerjee on Tuesday came down heavily on the North 24 Parganas District Magistrate Sharad Kumar Dwivedi and other officials, after she found that winter garments meant to be distributed by her at a public meeting in Hingalganj, were not brought to the event site.

It was not the first time that the Chief Minister had openly reprimanded officials or political leaders at administrative meetings. During an administrative review meeting in Purulia in May this year, Banerjee had come down heavily on the local District Magistrate Rahul Majumdar, after a Trinamool Congress leader had informed her that revenues from brick kilns were going into the “pockets of a few officials”.

“Are you listening, DM?” the CM had asked Majumdar point blank, after the local Trinamool leader had complained about the alleged corruption by some officials. “How are you running the district? You have been here for so many days. My idea (about you) has changed today… I am trying to give everything to the people, but why are people here greedy? How much more do you want?” Banerjee had said, making it clear that she would not allow corruption in the administration.

Senior officials including the DM, and Trinamool leaders, were present at the review meeting in Purulia. “Mind it, these are not Trinamool people… Had they been from my party, I would have slapped them,” Banerjee told mediapersons present.

Like in Purulia, on Tuesday, she reprimanded the DM of North 24 Parganas. Banerjee stalled the programme and refused to talk to officials until the garments were brought for distribution. “When I give things and it doesn’t reach the people, it angers me. When you visit a guest, you bring a gift. I bought winterwear, blankets and sweaters for the people here,” said Banerjee, as she glared at local administrative officials present on stage.

She turned towards DM Sharad Kumar Dwivedi, who was standing on the dais behind her, and asked him where the winter garments were kept. “I have brought 15,000 winter garments and blankets. Where have you kept them? Bring them to me immediately. I told you that we will distribute these directly, not through anyone,” Banerjee said, to the applause of the gathering.

Such public admonition is not only reserved for administrative officials. Leaders of her party have also faced her wrath. That’s what had happened at Ranaghat in December last year. The TMC supremo had pulled up her party MP Mahua Moitra at a public meeting in Krishnanagar, while expressing displeasure at growing factionalism within the party ranks in Nadia district. “Mahua, let me give you a clear message here. I don’t need to see who is against whom, but when there is an election, the party will decide who will fight and who won’t. So, there should be no disagreement here,” she had said.

“There is no reason to imagine that the same person will be in the same position forever,” she had added. Moitra, who had just been removed as the party’s Nadia district president, was seated on stage just behind Banerjee. She referred to posters being put up that accused a faction of the TMC leadership of corruption. Hinting at an inside job, Banerjee said a police investigation had revealed that the allegations were fake. “It is not what had happened. It was edited and planted in the media. I have had it cross checked by the CID,” she said. Her stern message comes ahead of impending civic polls in the state.

Last November, another TMC MLA, Bimalendu Singha of Karimpur in Nadia district, was left red faced when he complained to Banerjee that the BDO was not carrying out his order. He also urged that the BDO be transferred, as he had been posted at Karimpur-1 block for many years. The CM openly criticised the MLA, saying, “BDO is not bound to obey your order. An MLA cann’t advice a BDO’s transfer.”

TMC leaders expressed mixed reactions to this behaviour of the Chief Minister. A senior TMC leader said, “Sometimes, this attitude of the CM has helped us run the party at the grassroots level. At other times, it’s of no help. However, as a whole, this helps Banerjee maintain her (clean) image among the people.”

Leaders of Opposition parties the CPI(M) and the BJP however maintained this was nothing but eyewash. The CPI(M)’s Sujan Chakraborty said, “Why is she bullying others for her own fault? The main thing is that her failures have been exposed. She’s playacting to divert attention from that. She also wants to reduce all officials and party leaders to servitude.”

The BJP’s Samik Bhattacharya said, “I have never seen a CM distributing winter clothes. She may distribute this as a party leader or a BDO or SDO. And where did she go for that? To Hingalganj, from where people go to Andhra Pradesh, Karnataka and Maharashtra for work. People have no money or work in Hingalganj. The CM knows that.”

Banerjee has a long history of diverting attention from uncomfortable questions asked in public. In 2012, when she was still new to power in the state, at a rally at Belpahari, when a man named Shiladitya Chowdhury, a resident of Binpur, told Banerjee that the government was not doing enough, with farmers dying while the price of fertilisers kept rising, Banerjee labelled him a “Maoist” and had police arrest him under non-bailable sections soon after.

Earlier in 2012, during a TV show hosted by a private channel, Banerjee had called students in the audience “Maoists” and “supporters of the Communist Party of India (Marxist)”, after some of them asked her “uncomfortable” questions.