Addressing virtually the inaugural session of the BJP's national officer-bearers meeting being held in Jaipur, Modi also hit out at the politics of dynasty and nepotism, days after the Congress held its Chintan Shivir in Rajasthan's Udaipur. 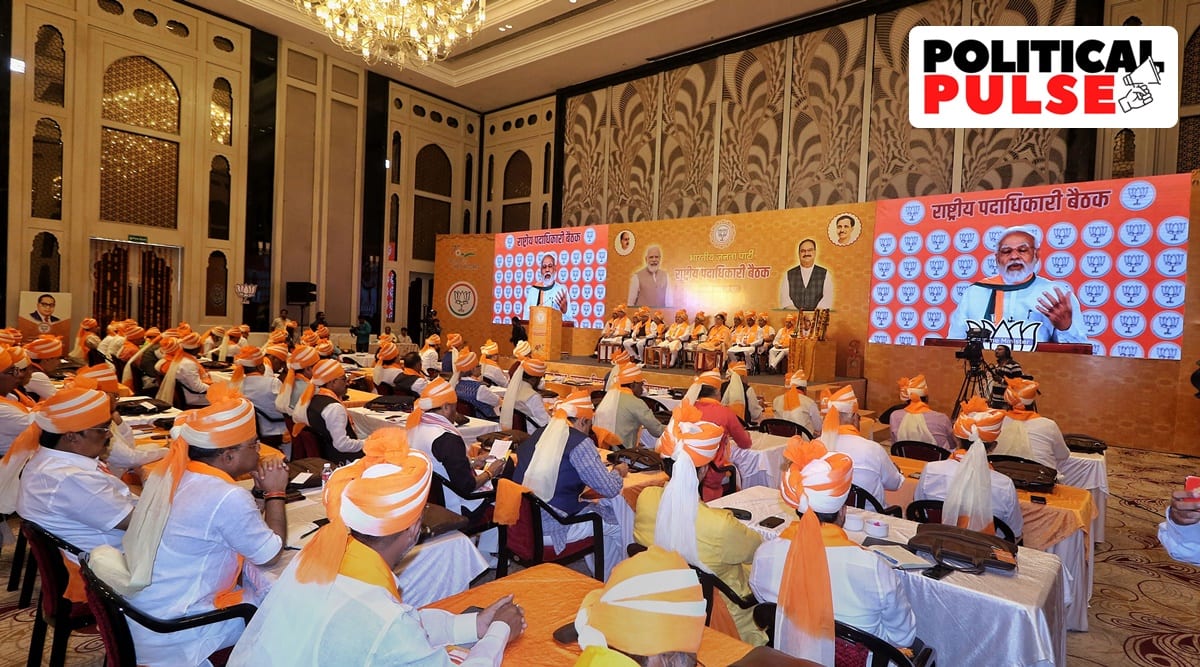 Prime Minister Narendra Modi on Friday said that there is a need to warn the nation against an attempt to create “new controversies” over languages and that the BJP “reveres” every Indian language.

Addressing virtually the inaugural session of the BJP’s national officer-bearers meeting being held in Jaipur, Modi said, “It is the BJP which has connected the diversity of our cultures and languages with national pride. Prioritising the local languages under the new National Education Policy shows our commitment towards every regional language. BJP considers the Indian languages as the soul of Bharatiyata (Indianness) and considers it the link for a better future of the nation.”

Also Read |In BJP bid for ‘most favoured’ status among Dalits, Nadda banks on ’emotional connect’

He said he wanted “to especially mention it today because for the past some time, there has been an attempt to create new controversies on the basis of language. We have to continuously warn the nation and society against this. BJP sees the reflection of Indian culture in every Indian language and considers each language sacred.”

At an event recently, actor Kiccha Sudeep spoke about pan-Indian films adding that “Hindi is no more a national language”. This triggered a reaction from actor-director Ajay Devgn, who asked the Kannada star that if Hindi was not our national language, then why he released his films dubbed in Hindi. Joining the issue, Janata Dal (Secular) leader and ex-chief minister H D Kumaraswamy then stated, “Devgan must realise that Kannada cinema is outgrowing Hindi film industry,” fuelling the row further.

The PM, without taking any names, hit out at the politics of dynasty and nepotism, days after the Congress held its Chintan Shivir in Rajasthan’s Udaipur.

“We have to remember that the trust of youth betrayed by the politics of nepotism can only be restored by the BJP. We all know how much damage vanshwaad (dynasty) and parivarvad (family politics) did since independence,” he said.

Modi charged that “parivaarvadi” parties wasted the nation’s valuable time with corruption, irregularities and “bhai-bhatijavaad (nepotism)”. “Even today, such parties are bent on pushing the nation back. Their public life begins with family and only works for family. BJP has to continuously challenge these parivaarvadi families. This is the most fatal tradition for democracy. If you want to save democracy, then we have to continuously struggle against the politics of dynasty and nepotism,” he said.

The BJP is however, he claimed, not a “thehra hua paani (puddle)”, adding that “The BJP is continuously flowing. As a party, we have continuously evolved. Even in the mud of dynasty and nepotism, we have made the lotus (BJP’s poll symbol) bloom”.

Modi said for “selfish reasons” certain political parties “search for chhote mote tanaav (tension) within society and add poison to it and keep playing with those weaknesses, by provoking people either in the name of caste or regionalism. It is mandatory for us to continuously warn people against such people and parties,” he said. “We see how the ecosystem of some parties, with all its power, is busy in trying to divert the nation’s focus from major issues.”

In Premium Now |The road ahead: BJP reads signals for 2024, looks at areas and strategies to work on

Modi also said, “For decades, only Gandhi ji’s name was taken but work was done contrary to his vision. He wanted self-reliance in the country, but from policy to practice, India became dependent on other nations. Today, the nation is watching how things are changing quickly under BJP governments. Today, the nation is walking on the path towards self-reliance. Every Indian is now ‘vocal for local’ and is proud of local products.”

Drawing a parallel between “India in the world” and the “BJP in India”, the PM said, “Today we are witnessing how a special emotion towards India has been evoked in the world. The world is watching India with a lot of hope. In the same way, Indians have a special affection towards BJP. Indians are looking at the BJP with a lot of trust and hope. Their hopes and aspirations increase our responsibility manifold.”

Advertisement
Also Read |Why the BJP needs the Congress, not a ‘Congress mukt Bharat’

Modi said, “Imagine a person with a serious ailment. When that person does not improve even after long treatment, then he accepts the disease as his fate. He accepts the circumstances and learns to live with it. Sometimes it happens with nations too. In our nation too, for a long time, people helplessly thought this way too, that there is no support. They had no hopes from the government, nor did the government understand that it is answerable to them.”

This, he said, changed in 2014. “The people decided to write history in 2014 and after 2014, BJP brought people out of this thinking. There is no despair but hope and aspiration. The people are full of aspirations and every citizen wants results and wants to see it with their own eyes,” he said. “And when aspirations of 130 crore people are awakened, then certainly the answerability of governments also increases, it becomes necessary for them to work. This awakening inspires every person in public life to work and also pressures them. Hence, in the growing aspirations of the people, I see a bright future for the nation.”

He said there might be a BJP government in 18 states and the party may have over 1300 MLAs and over 400 MPs, yet “as a BJP worker, we have no right to sit in peace”. Exhorting party leaders to work harder, he said, “We are still impatient, restless and eager” in order to take India to those heights as dreamt by those who laid down their lives for our independence.

“I keep talking of ‘saturation’ (of schemes) with government officials and state governments. It is not just a figure for perfection…it is a means to bring the nation out of discrimination, nepotism, appeasement and corruption,” he said. “We can proudly say that it is BJP which has made vikaasvaad (development) politics the mainstream of politics in India.”