From Vajpayee to Modi, Mulayam to Yogi: The changing politics of iftar parties

The near-disappearance of the iftar culture from the political landscape is being seen as a sign of the distance India's politics has travelled over the last few years, a shift that is being attributed to the dominance of the BJP in national politics. 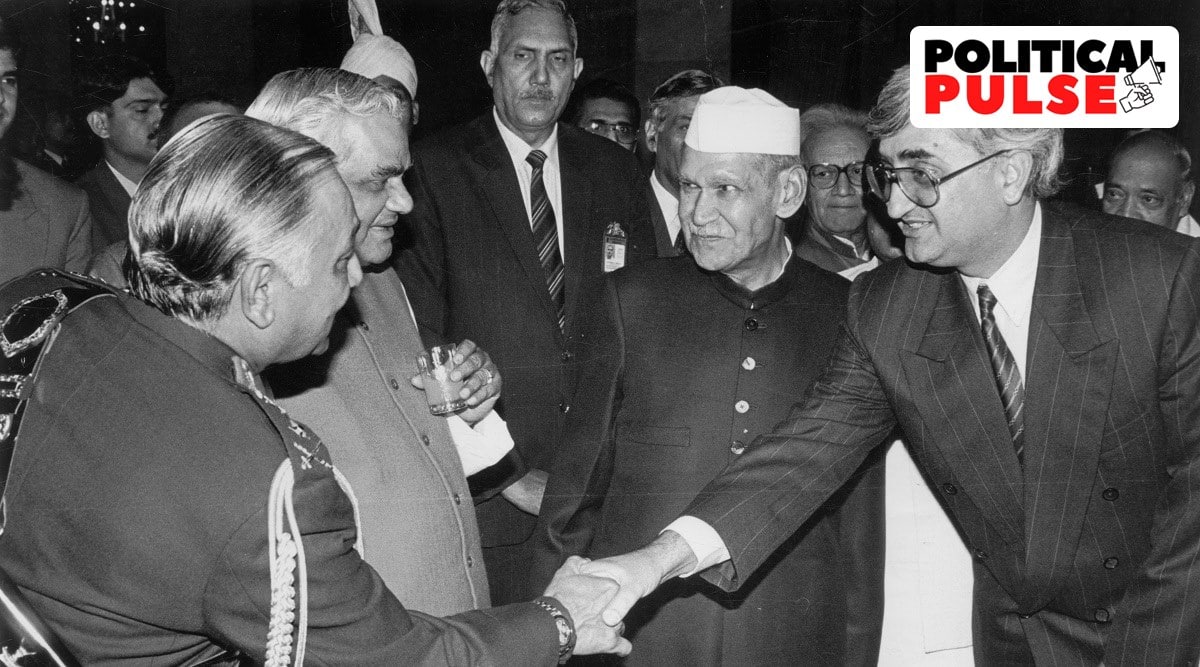 Iftar parties during the month of Ramadan, once a fixture in India’s political calendar with the guest list closely studied for the signals they sent out — from warming ties to freezing equations — are no longer the buzz in the national capital.

The near-disappearance of the iftar culture from the political landscape is being seen as a sign of the distance India’s politics has travelled over the last few years, a shift that is being attributed to the dominance of the BJP in national politics.

Political iftars — a multi-partisan affair marked by competitive political outreach — are believed to have been started by India’s first Prime Minister Jawaharlal Nehru, who hosted the sunset meal for his close Muslim friends at 7 Jantar Mantar Road, then the AICC headquarters. Over the years, the iftars gained in political significance, becoming a symbol not only of political gamesmanship but of a personal and social outreach to Muslim leaders and to the community as a whole.

Though Nehru’s successor Lal Bahadur Shastri stopped the practice, Indira Gandhi, who had been advised to do the exercise to keep her Muslim support base intact, restarted the practice that was continued by her successors.

In Uttar Pradesh, it was former CM Hemvati Nandan Bahuguna who made iftars an official affair, a practice that was continued with even more vigour by his successors, including Mulayam Singh Yadav, Mayawati, Rajnath Singh, Kalyan Singh and Akhilesh Yadav.

Chief Minister Yogi Adityanath, however, broke the decades-old tradition. Adityanath, who has in the past organised a ‘kanya poojan’ and hosted a ‘falahari feast’ at his official CM residence during the Navratri fasting period, has never hosted a roza iftar since he took over the reins of the state in 2017.

The BJP, however, was never against the concept. As late as 2019, then Uttar Pradesh Governor Ram Naik held an iftar at the Raj Bhavan though Yogi never attended those.

In New Delhi, like his predecessors, Atal Bihari Vajpayee, who was heading a rainbow coalition at the Centre, was at ease with hosting iftars, inviting Muslim leaders and posing with them for photographs.

Senior BJP leader Shahnawaz Hussain, currently a minister in Bihar, who used to be the main organiser for Vajpayee’s iftar functions, recalls how special caps used to be made for the PM after photographers captured some embarrassing moments of the PM in his ill-fitting cap. Hussain says Murli Manohar Joshi, as party president, held the BJP’s first official iftar party. “Atalji as Prime Minister held it twice, then he suggested I could host one in which all prominent figures could be invited and he would also attend it,” Hussain recalled.

During the UPA regime, the late Indian Union Muslim League (IUML) leader and former Union Minister E Ahamed’s iftar parties hosted prominent Muslim leaders, diplomats of Islamic countries, businessmen as well as top political leaders who mingled setting aside political and ideological differences. Ahamed’s iftar parties – he started the practice in 1991 when he came to Delhi as an MP – had BJP leaders too in attendance.

Rashtrapati Bhavan, too, hosted elaborate iftar parties. It was discontinued during the presidency of APJ Abdul Kalam (2002-07), who decided to instead spend the money on food, clothes and blankets for orphanages. Later, Pratibha Patil and Pranab Mukherjee resumed the practice.

Interestingly, after the BJP and its politics took centrestage, other parties too stopped organising iftar parties.

A BJP leader pointed out that even Ram Vilas Paswan was not keen on hosting iftars while he was part of the during Modi Cabinet. The Congress, confused about its Hindutva stand, also lost enthusiasm for it. This year in Lucknow, neither SP’s Akhilesh Yadav nor BSP’s Mayawati (as CM, she had made it a spectacular event by hosting them at five-star hotels) have yet organised an iftar.

In Premium Now |An invite, and a non-invite: Nitish makes the most of it, stirs up food for thought

But in many other state capitals, iftars continue to be an occasion to showcase mutual respect and set aside political differences. In Kerala, both Chief Minister Pinarayi Vijayan and Leader of Opposition V D Satheesan organised iftar parties to which leaders of all parties were invited.

Though there’s a view that iftars were anyway a token gesture, several political observers see in them a larger message to the minority community — of accommodation and outreach — and in their disappearance a sign that times have changed.

“The situation is different now. At the heart of this (the disappearing iftars) is the BJP’s shift in ideology. From being pro-Hindutva, the party is now anti-Muslim. They now want to decimate everything that is Islamic,” said a writer who did not want to be identified.

Gujarat set to record highest ever gram procurement this year