Spearheaded by Priyanka Gandhi, the Congress campaign in UP seeks to reach out to women in the run-up to the Assembly elections, while other parties eye on different caste groups 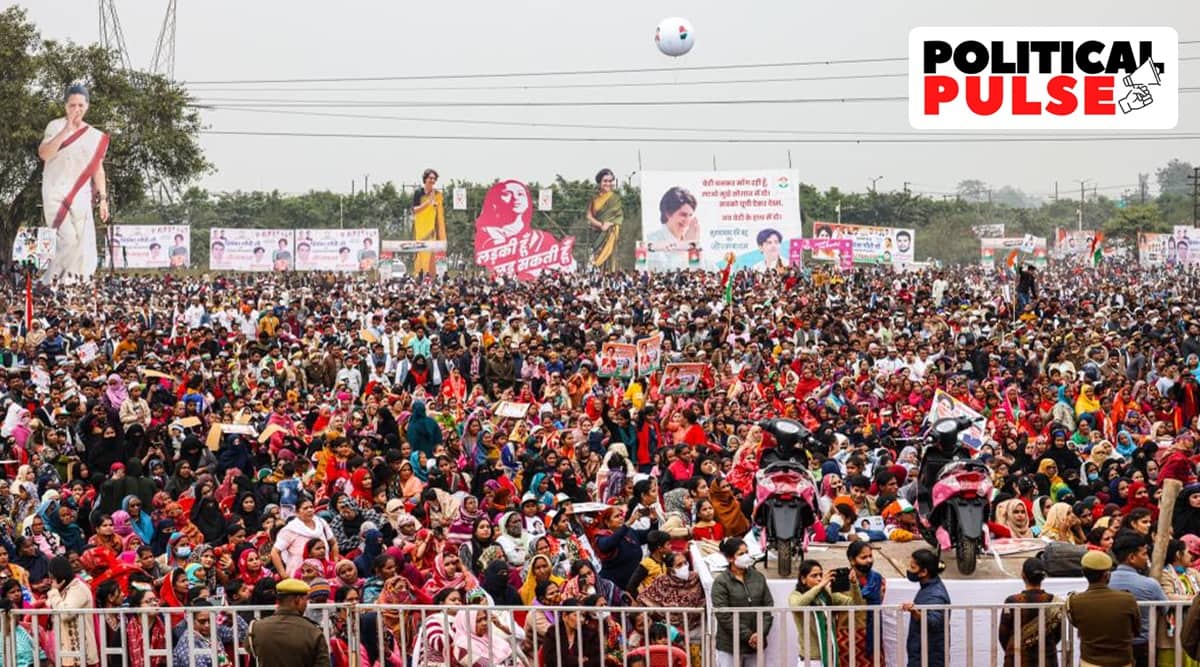 Spearheaded by Priyanka Gandhi, the Congress campaign in UP seeks to reach out to women in the run-up to the Assembly elections, while other parties eye on different caste groups | Twitter/@priyankagandhi

Unlike other political parties in Uttar Pradesh eyeing on different caste groups in the run-up to the upcoming Assembly polls, the Congress’s campaign being spearheaded by party general secretary Priyanka Gandhi Vadra is focusing on women voters.

Launching a special manifesto for women Wednesday in Lucknow, Priyanka asserted that the Congress was trying to make “young and aspiring women” its primary voter base. With a slogan of “Ladki hun, lad sakti hun”, the party has already pledged that it will field 40 per cent female candidates for the elections to the 403-member UP Assembly slated for early next year.

While other parties are looking to tap into various caste vote banks, the Congress is yet to identify a caste group in UP that might form its core vote bank. Ahead of the elections, all other major parties have made it clear that they will be focusing on different caste groups in the state.

The SP is reaching out to non-Yadav OBCs and Dalits besides the Yadav community and has forged its alliances on the basis of castes, while the BSP has zeroed in on Brahmins and Dalits.

The ruling BJP is focusing on OBCs and Dalits apart from the upper caste Brahmin community.

Among the Opposition leaders, Priyanka seems to have become most vocal on the issue of crimes against women, especially Dalit women, in UP.

In its women manifesto, the Congress has made several promises to women, aimed mostly at young women, even as the party makes attempts to create a core vote base in a state where it has been in political wilderness for many years.

In 2017, when the Congress had formed an alliance with the SP, it just managed to win 7 seats out of the 114 it contested. The party’s overall vote share was 6.25 per cent, while its vote share on seats it contested was 22.09 per cent.

On Wednesday, Priyanka made a slew of promises to UP women, including 40 per cent reservation for them in government jobs. Earlier, she had pledged a smartphone for girl students of class 12 – and a scooty for those pursuing a graduation degree for their mobility and safety.

In its manifesto, the Congress has also pledged that if voted to power, it will make public transport free for women in the state.

A senior Congress leader told The Indian Express that the party is trying to create a core vote bank with the help of women, with a special focus on “young and aspirational women”. “Our campaign in UP is being led by Priyanka ji, and the strategy to focus on young women is a farsighted one. We feel that even if we can’t reap significant benefits of the policy in the upcoming elections, our vote share will increase and young women in the state will look up to Priyanka ji as their leader,” said the leader.

In 2017 elections, women accounted for 45 per cent of the UP electorate, while the votes cast by women amounted to 47 per cent out of the total 8.67 crore votes polled. Of the total 4,370 candidates who contested the polls, 482 were women candidates, of whom 42 were elected.

UP Congress president Ajay Kumar Lallu Thursday said that the party has already received 3,000 applications for women candidates from across the state. “We are going through them, and will choose the best candidates,” he said.

There is, however, a possibility that the Congress’s move to allot 40 per cent tickets to women might see “dummy candidates” with husbands, fathers and sons being the real candidates.

Commenting on this issue, Congress national spokesperson Supriya Shrinate said, “In the Panchayati Raj system where 33 per cent reservation is given to women, there are around 10 lakh women in positions of power, who are elected. Some may be dummy candidates, but that does not mean that it has not led to empowerment of women in villages. Many elected women are the ones making decisions and let’s not undermine the power the reservation in the Panchayati Raj system has given to women in the country. And we hope to achieve similar results by giving 40 per cent tickets to women.”

Talking about the challenge to ensure that the message reaches to women across the state, Shrinate said, “We are engaging our entire leadership to ensure that Priyanka ji’s message reaches every corner of the state. We plan to get in direct contact with at least 5 crore women in the coming days. We will have small and big campaigns for outreach,” said Shrinate.

“While we are focusing on everyone including farmers and youths, yes, we are not focusing on any specific castes. Because we feel that politics has to break the barriers of caste and that change is inevitable,” she added.

Congress leaders say that the party will soon come up with another manifesto for all other sections of the society, including farmers and youths. They claim that it was “only the Congress which fought against the BJP government in UP in the last five years”. “Why didn’t Akhilesh Yadav go to jail? Why didn’t he get hit by police lathis. It was Priyanka Gandhi ji who fought this government head-on, and the people of the state have seen it,” Lallu claims.

They say that whether it was the Lakhimpur Kheri incident, where four farmers and a journalist were killed, or the gangrape and murder of a Dalit woman in Hathras last year, the Congress has been “active in hitting the ground and questioning the government”, and that the state has seen several instances of Priyanka being detained while visiting victims across the state.
“We are confident that the people will vote for us, and not for SP or BSP, which has been silent on most issues,” Lallu claims.
A senior Congress leader said that while the party hopes that people remember these incidents while voting, only time will tell about their impact. “We have to be at peace with the fact that the old days are gone when Congress was very strong and formed governments in UP. The party may take time to revive, but under Priyanka ji’s leadership, we are moving in the right direction,” the leader said.

Shrinate said, “We have worked very hard on our organization, and we must remember that we haven’t been in power in UP for over three decades. Now, we have an organization till the booth level. We have seen good crowds in Priyanka Gandhi’s rallies, which is an encouraging sign. She is here not just for this election, but also for making the party stronger, building a robust cadre and appointing strong leaders.”

Light vs dark soy sauce: Know the basic difference (and when to use them)