TMC fights ‘outsider’ tag with manifesto promising govt by people of Meghalaya, ‘not controlled by BJP’ 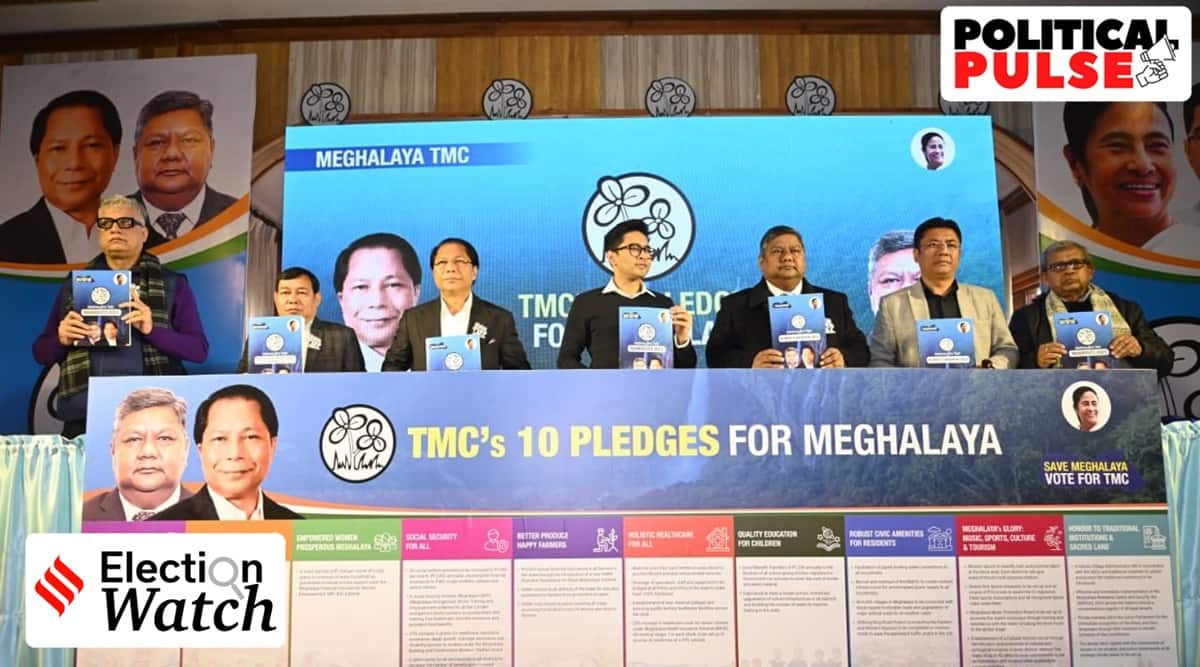 The TMC announced its manifesto in the state and has announced candidates for 52 of the 60 seats already. (Twitter/ @AITCofficial)
Listen to this article
TMC fights ‘outsider’ tag with manifesto promising govt by people of Meghalaya, ‘not controlled by BJP’
x
00:00
1x 1.5x 1.8x

FIGHTING the tag of being a “Bengali” party, the Trinamool Congress released its manifesto for Meghalaya on Tuesday, promising that it would “reclaim” the state through a government “of the people, by the people and for the people of Meghalaya”.

The TMC, which is heading into the polls as the biggest opposition party in the current Legislative Assembly, is first off the block with its manifesto in the state and has announced candidates for 52 of the 60 seats already.

A government formed by it “will pledge its allegiance to Meghalaya rather than to forces sitting in New Delhi or Guwahati”, the party said, reiterating the TMC’s claim that the National People’s Party-led Meghalaya Democratic Alliance government is “remote controlled” by the BJP leadership, from the Centre and via Assam Chief Minister Himanta Biswa Sarma.

Amrith Lal writes |Beyond the Ballot: CPM, Congress, and a view of national politics from Agartala

Speaking at the manifesto release, TMC general secretary Abhishek Banerjee said: “When the Trinamool first set foot in Meghalaya, a lot of people labelled us as outsiders: ‘TMC is an outsider party, it knows nothing about Meghalaya.’ It’s with immense pride that we present a manifesto with 10 pledges construed after extensive deliberations with people across the state.”

Banerjee added that the “irony” was that a party that had labelled the TMC outsider was yet to come up with its own manifesto or vision document for the state. “(It is) because neither do they have a vision for Meghalaya, nor a mission for Meghalaya,” the TMC leader said.

We PLEDGE to serve the people of Meghalaya.

We are accountable to every single person of Meghalaya, and we will ensure that our TEN PLEDGES are implemented and benefit every single individual in Meghalaya.

The TMC’s promises include revoking an Assam-Meghalaya border MoU signed by the two states last year. The party alleged that under the MoU, the Conrad Sangma government that is backed by the BJP had “shamelessly surrendered 18.46 sq km of Meghalaya’s sacred land to Assam”.

It also promised to constitute an expert committee to look into the demand for an Inner Line Permit in the state, adding that it would take a decision “which is in the best interest of residents”.

Under ’10 Pledges for Meghalaya’, the TMC promised a slew of welfare schemes, including financial assistance to different sections of society such as direct transfer of Rs 1,000 per month to a woman of every household through a Meghalaya Financial Inclusion for Women Empowerment Scheme; allowance of Rs 1,000 per month to all unemployed people aged 21-40 under a Meghalaya Youth Employment Scheme; increase of all social welfare pensions to Rs 1,000 per month; Rs 10,000 annually to farmers through a Farmers’ Assistance for Rural Meghalaya Scheme; and direct benefit transfer of Rs 1,200 annually to families of all school-going children registered in government schools.

Banerjee claimed the promises would be met within 100 days in case a TMC government was formed in the state. “We don’t make empty promises. We have already factored in the question of money. The state has the money but the government does not have the intention to spend,” he said.

Other promises by the TMC include creating 3 lakh jobs over the next five years; adding 4,000 new MSMEs annually; a ‘scientific and sustainable’ mining policy; connecting all villages with black-topped motorable roads; new medical colleges; establishment of a Sports University, Meghalaya Music Promotion Board, and a culture tourism circuit.

Mukul Sangma, the TMC Legislature Party leader and former chief minister, called upon leaders of other parties to join the party, accusing the present government of being “anti-people”. “We have spent the preceding months trying to understand the living conditions of people, their issues and their unfulfilled dreams, to find how we can attend to them. This manifesto is the outcome of that exhaustive exercise,” he said.

Elected as a Congress MLA in 2018, Sangma had switched with 12 of the 17 party MLAs to the TMC latter. The TMC, which won 0 seats in the polls, thus ended up becoming the main Opposition party in the state.