Since last year, YS Sharmila has been on a padayatra across Telangana to establish her party. The KCR-led party had been ignoring her but all that changed on Monday. 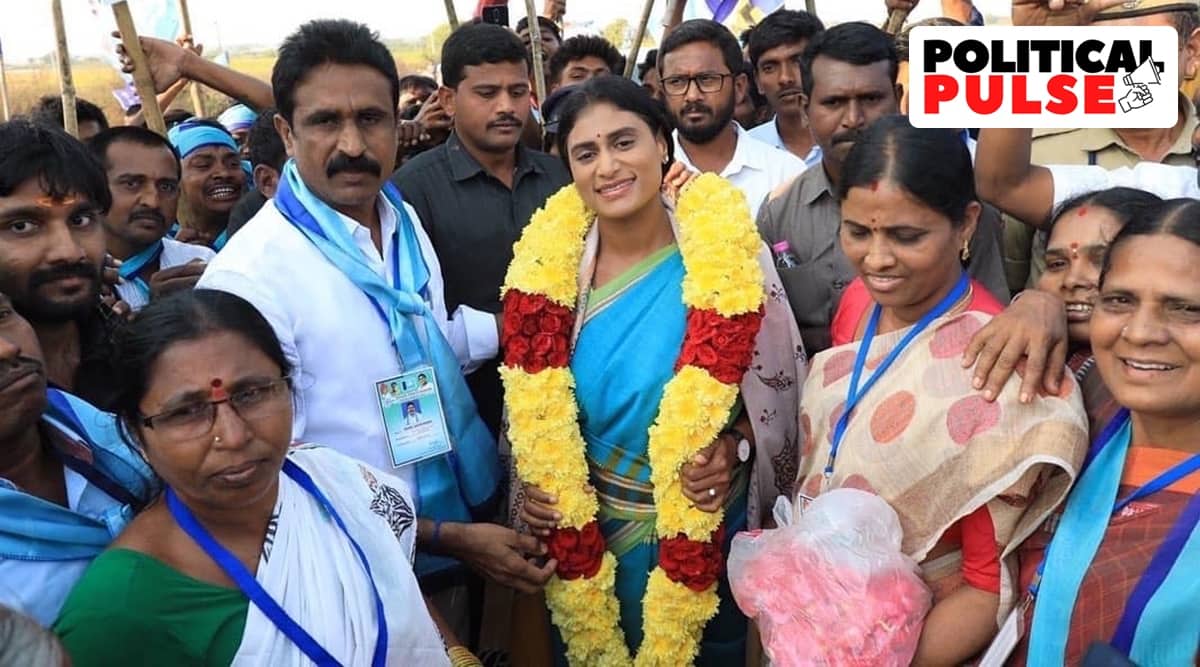 Sharmila, who founded the YSR Telangana Party last year, was detained in Warangal district on Monday after workers of the TRS attacked her convoy. (Facebook/ IMSharmilaReddy)

Her brother is Andhra Pradesh Chief Minister YS Jagan Mohan Reddy and, finding no space in the state’s politics under him, YS Sharmila moved to neighbouring Telangana last year to establish her political career.

Sharmila who founded the YSR Telangana Party (YSRTP) last year was detained in Warangal district on Monday after workers of the Telangana Rashtra Samithi attacked her convoy. Her accusations of corruption against P Sudarshan Reddy, the TRS MLA from Narsampet in Warangal district, was the trigger. On Tuesday, she was detained for the second time in as many days as she proceeded towards Pragathi Bhavan, the office-cum-residence of Telangana Chief Minister K Chandrashekar Rao in Hyderabad, officers said. The police towed Sharmila’s car away even as the YSRTP chief was seated in it. The police also detained many YSRTP activists.

#WATCH | Hyderabad: Police drags away the car of YSRTP Chief Sharmila Reddy with the help of a crane, even as she sits inside it for protesting against the Telangana CM KCR pic.twitter.com/ojWVPmUciW

Sharmila, 48, is the daughter of former Andhra CM YS Rajashekar Reddy. She founded the YSRTP on July 8, 2021, and is testing the political waters in Telangana. With her brother heading the YSRCP, which is in power in Andhra Pradesh, and not finding any political space for herself amid the Telugu Desam Party (TDP), the Jana Sena Party (JSP), the BJP, and the Congress, Sharmila shifted to Telangana.

On October 20, 2021, she started the Praja Prasthanam Yatra, a foot march across the 33 districts of Telangana. Before coming to power in Andhra, her brother too had undertaken a statewide padayatra to connect with voters. Sharmila has been marching through Telangana with dozens of followers, most of whom are former YSR loyalists. She has been meeting villagers and discussing their problems and local issues. Sharmila camps in a specially designed bus at various places. It was this bus that TRS workers tried to torch on Monday, which was the 223rd day of her padayatra.

#WATCH | Hyderabad: Police drags away the car of YSRTP Chief Sharmila Reddy with the help of a crane, even as she sits inside it for protesting against the Telangana CM KCR pic.twitter.com/i7UTjAEozD

YSRTP spokesperson K Raghava Reddy said that during her interactions with people during the padayatra and public meetings, Sharmila mostly discusses with people the problems they face such as discrimination in the distribution of welfare schemes, lack of civic infrastructure, alleged corruption in the ruling party in the state, beneficiaries not receiving government aid or benefits under the Arogyasri health scheme, or school and college fee reimbursement.

In some places, her candid talk has rubbed TRS workers the wrong way. Several times last year, Sharmila accused Chief Minister K Chandrashekar Rao of mishandling the Covid-19 crisis. Ruling party MLAs and leaders have not commented on Sharmila’s political ambitions in Telangana so far, dismissing her as a novice and her political entry as an adventure denied to her in Andhra Pradesh.

No stranger to padyatras

The 48-year-old resurfaced in Hyderabad last year after lying low for almost two years since her brother Jagan Mohan Reddy’s landslide victory in Andhra Pradesh in May 2019. She announced the launch of her party on the birth anniversary of her father and has subsequently said she aims to bring back “Rajanna rajyam”, referring to YSR’s governance model.

Sharmila is not seen as an “outsider from Andhra” yet and, according to sources, a majority of her supporters are former members of the Congress and the YSRCP in Telangana. She has also received the backing of her mother YS Vijaya Lakshmi. In July, as the YSRCP got ready to anoint Jagan as its president for lifetime, Vijaya Lakshmi, the co-founder of the party, announced her resignation as honorary president of YSRCP. As she stepped down, Vijaya Lakshmi said she wanted to devote herself to helping her daughter.

Sharmila, meanwhile, is not new to gruelling foot marches. In June 2012, after the CBI arrested her brother in a quid pro quo case, she resumed campaigning on behalf of her brother for by-elections. That October, she started a padayatra on her own, walking nearly 3,000 km from her home village Idupulapaya in Kadapa district to Ichachapuram in Srikakulam. Ahead of the 2019 elections, Sharmila did an eleven-day bus yatra through Andhra Pradesh in support of the YSR Congress Party, covering around 1,500 km.