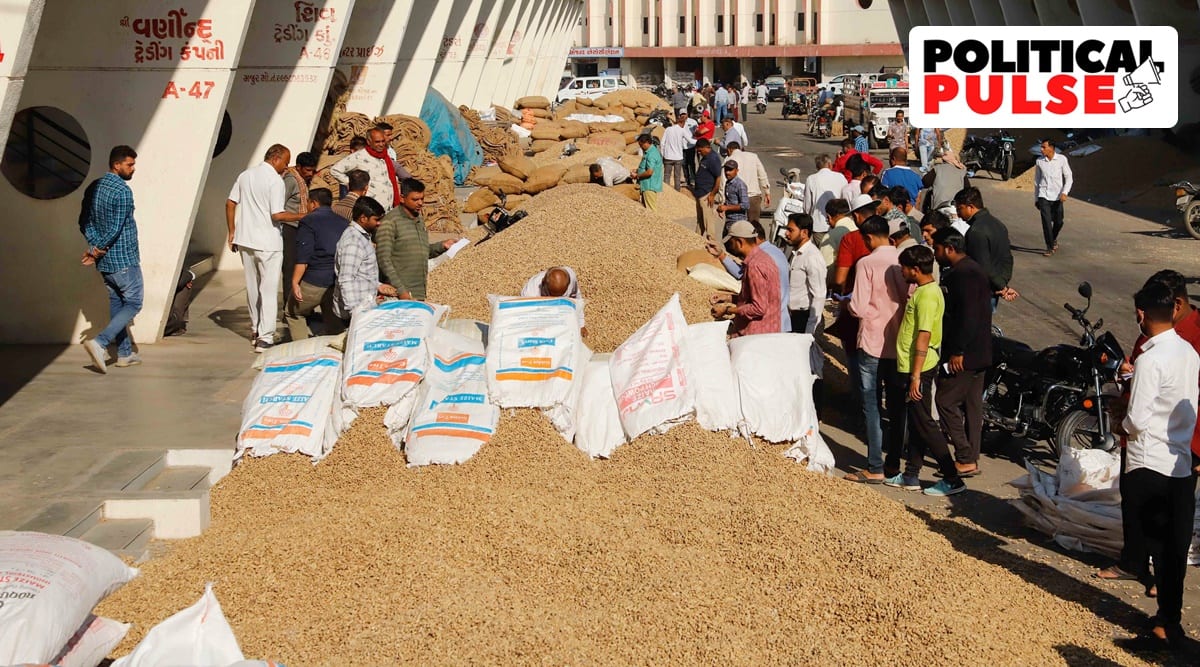 An auction of groundnuts underway at the Agriculture Produce Market Committee yard in Rajkot on November 26. (Express photo by Chitral Khambhati)

THE AUCTIONEER quotes Rs 5,000 per quintal as the base price for groundnut brought by Hansraj Gadhiya, and then invites bids from buyers. The farmer sits down in the auction shed of the Agricultural Produce Market Committee (APMC) in Rajkot, resignation writ on his face. A small bidding war pushes the price up to Rs 5,425. But the bidding soon stops, and the auctioneer announces that Gadhiya’s lot of 28 quintals of groundnut, grown on a 1.24 hectare field, sold.

The 45-year-old farmer from Vijaynagar village in Tankara taluka of Morbi district, who has no formal education, seems neither too happy nor unhappy by the outcome. “One gets what is written in one’s destiny,” he philosophises.

His total crop this year was double that of last year, when his groundnut was infested by white grub pests that eat roots of plants. The price he got this year is also higher than the Rs 4,500/quintal he had got last year, though it’s Rs 425 lower than the Rs 5,850 that was announced as the minimum support price (MSP) by the Central government this year. Gadhiya says he doesn’t sell his produce to the government as generally, it takes a couple of weeks to get paid via bank transfer, at a time when he needs cash to pay his labourers, and to buy seeds and fertilisers for sowing winter crops. Instead, he prefers to sell at the APMC, where he is paid hard cash, instantly.

Gadhiya has also taken on lease an additional 1.5 hectares to grow cotton. A few days ago, he sold 22 quintals of cotton, harvested during first picking, at Rs 9,000 per quintal, substantially higher than the MSP of Rs 6,080 for the medium staple variety he had grown this year.

The price Gadhiya got for groundnut this year is higher than the Rs 4,500/quintal he had got last year, though it’s Rs 425 lower than the Rs 5,850 that was announced as the MSP by the Central government this year. (Express photo by Chitral Khambhati)

“Prices are so-so. A farmer will never be happy about the price he gets for his produce,” he says.

What Gadhiya is unhappy about is the unreliable electricity supply to his farm, a central plank of the BJP in the state. He still has nice words for Prime Minister Narendra Modi, though. “Modi does work, but we are not getting the hours of supply we are promised. Currently, the government is supplying us power for 10 hours daily as the elections are round the corner. But it will stop once the elections are over. The government will again forget us, farmers,” Gadhiya says, adding, “A party should be voted out every five years so that the government remains on its toes.”

After harvesting the groundnut, Gadhiya has sown gram (chana) in his 1.5 hectare field, but needs power to operate motor pumps installed in two open wells to draw water for irrigating the Rabi crop, as well as the cotton he had sown in the Kharif season.

Claiming that he had burnt Rs 30,000 worth of diesel to give two irrigation to his crop by drawing water from the nearby Aji river using a diesel pump the year before last, Bavji Rangani (52), a farmer with five hectares of land from Moviya village in Paddhari taluka of Rajkot, also gets animated (excited here meant a bit aggressive. So, animation is not a proper discription, I am afraid) while talking about power supply. “The government promises that it’ll give power for eight hours, but actually gives it for six hours, with the supply disrupted scores of times. But these days, they are giving it for 10 hours because of elections,” says Rangani, who sold his crop of G-20 groundnut — a variety that is widely cultivated in Saurashtra — for Rs 6,300 per quintal.

Rangani, who dropped out of school after Class X, has sown cotton in 1.2 hectares and the crop, he says, looks good. “But cultivation costs have risen by 35 per cent, as pesticides, fertiliser, diesel and labour have all become costlier,” he adds.

At the Gondal APMC, Mahesh Dobariya (35), a farmer with 3 hectares in Vinzivad village of Gondal taluka of Rajkot, agrees with Rangani. “The average cultivation cost was Rs 18,000 per hectare last year, but it has shot up to Rs 30,000 this year. Hence, Rs 6,000 would have been a remunerative price, instead of the Rs 5,500 I actually got for my groundnut,” Dobariya says, after selling his 28 quintal groundnut at the Gondal APMC. “However, I will continue supporting the BJP as it provides safety, security, drinking water, etc.,” he adds.

Groundnut and cotton prices are higher by an average of Rs 500 and Rs 3,000, respectively, over the corresponding prices last year, say traders, mainly due to robust domestic and overseas demand.

Gujarat accounts for about a half of India’s groundnut production. Within Gujarat, the Saurashtra region accounts for more than two-thirds of groundnut acreage and production. Gondal is the biggest wholesale market of groundnuts in the state, while Rajkot APMC is considered the second largest market of groundnut, but among the biggest for cotton in the state. Gujarat is also the largest cotton producer of India. Cotton and groundnut are the main cash crops of Gujarat in general and Saurashtra in particular.

“This is a rare year when good cotton yields have coincided with good market prices. So, the Rs 9,170 per quintal I got today sounds good. But one should remember that a bag of the fertilizer, DAP, which cost Rs 600 five years ago, today costs Rs 1,350. Labour charge for picking a quintal of cotton was Rs 750 last year. This year, I’m shelling out Rs 850,” says Ramesh Boda, who owns 1.5 hectares in Sarapdad village in Rajkot’s Paddhari taluka, before adding, “To make farmers feel happy during elections, the government is even supplying power during the day.”

PM Modi, who had served as chief minister of Gujarat from 2001 to 2014, had launched the Kisan Suryodaya Yojana (KSY), a scheme to supply power to farmers of Gujarat during daytime, in October 2020. However, state-owned Paschim Gujarat Vij Company Limited (PGVCL), the largest discom in the state that distributes power in 11 districts of Saurashtra, as well as in Kutch and parts of north Gujarat regions, had suspended implementation of KSY in October last year, to keep the grid “stable”, as power supply had dipped at a time when demand was rising.

Varun Kumar Baranval, managing director of PGVCL, says the company has been supplying power to farmers during daytime for the past couple of weeks but adds that it’s not under the KSY. “It’s not as per the scheme. Rather, it’s due to a sharp rise in our solar power generation due to increasing solarisation of our grid. We have been doing some scheduling too,” he says, adding, “We are supplying power to farmers during daytime as power is available. It’s not load-shedding.”

Advertisement
A worker unloads groundnuts from a truck at the APMC yard in Jamnagar, November 25. (Express photo by Chitral Khambhati)

There are around 18 lakh agricultural connections in Gujarat, including 11.5 lakh which are served by the PGVCL. Farmers pay an average 75 paisa per unit while the government gives an average of Rs 2.60 per unit as subsidy to them. Farmers in the state get power for eight hours a day in rotating weekly shifts, in which, every third shift is a night shift. However, days before November 3, when he Election Commission of India announced the schedule for the Assembly election in Gujarat, the state government extended power supply to 10 hours.

“For the past one week, we have started getting power for 10 hours during daytime. But I am fully aware that this is going to stop as soon as polling for Assembly elections is over, though industries will continue to get round the clock supply,” says Dilip Mungalpara (38) a farmer from Khajuri village of Paddhari, who had brought his 47 quintal of cotton grown on a two hectare plot, to Rajkot APMC that fetched him a price of Rs 9,150 per quintal.

He says he will explore new options while casting his vote on December 1, when polling will be conducted in Saurashtra, Kutch and south Gujarat regions, in the first phase of the two-phase Assembly elections.

Workers unload cotton from a tractor trolley at the APMC yard in Jamnagar, November 25. (Express photo by Chitral Khambhati)

In almost every public meeting that Modi has addressed in the state over the past five months, he has talked about bringing Narmada waters to Saurashtra for irrigation and drinking purposes, and how residents of the state are today getting round the clock power. The BJP government in fact claims Gujarat to be a power-surplus state. “While that may be true, the fact is that power supply to farms is not regular. Why should only farmers get electricity at night, exposing them to risks of being attacked by wild animals or bitten by snakes or other poisonous insects while irrigating their crops?” asks Vinu Khakhariya (45), who has a three hectare farm in Moti Veraval village in Lalpur taluka of Jamnagar district, after selling his 30 quintal cotton crop at a unit price of Rs 9,165 in Jamnagar APMC.

The BJP manifesto for Gujarat promises Rs 10,000 crore for farm infrastructure and Rs 25,000 crore to augment irrigation facilities over the next five years. The Congress, meanwhile, is promising 10 hours of daytime power to farmers, for which they will be charged on per-day basis instead of per unit basis, while AAP is promising 300 units of free electricity if voted to power. But some farmers are hesitant. “What do we do with 10 hours of power supply if there is no water,” says Prakash Bharwad (26), a farmer from Morbi district’s Raydhara village, who got Rs 6,425 for his Gujarat Groundnut-9 variety that’s fetching up to Rs 10,000 in the Jamnagar APMC. He adds that unlike farmers in neighbouring villages, he doesn’t get Narmada water for irrigation.

“No leader of any political party is going to come and lend a hand on a farmer’s field. So no one is going to give us anything free. Ultimately, the burden will be on our backs,” says Khakhariya.