Row over Paresh Rawal remarks | Ahmedabad’s Bengali migrants have a bigger problem: The Disturbed Areas Act that ties them down

Generations of artisans from Bengal have worked in city's jewellery units, in dinghy builds, crowded spaces, ignored by parties as only a handful are voters 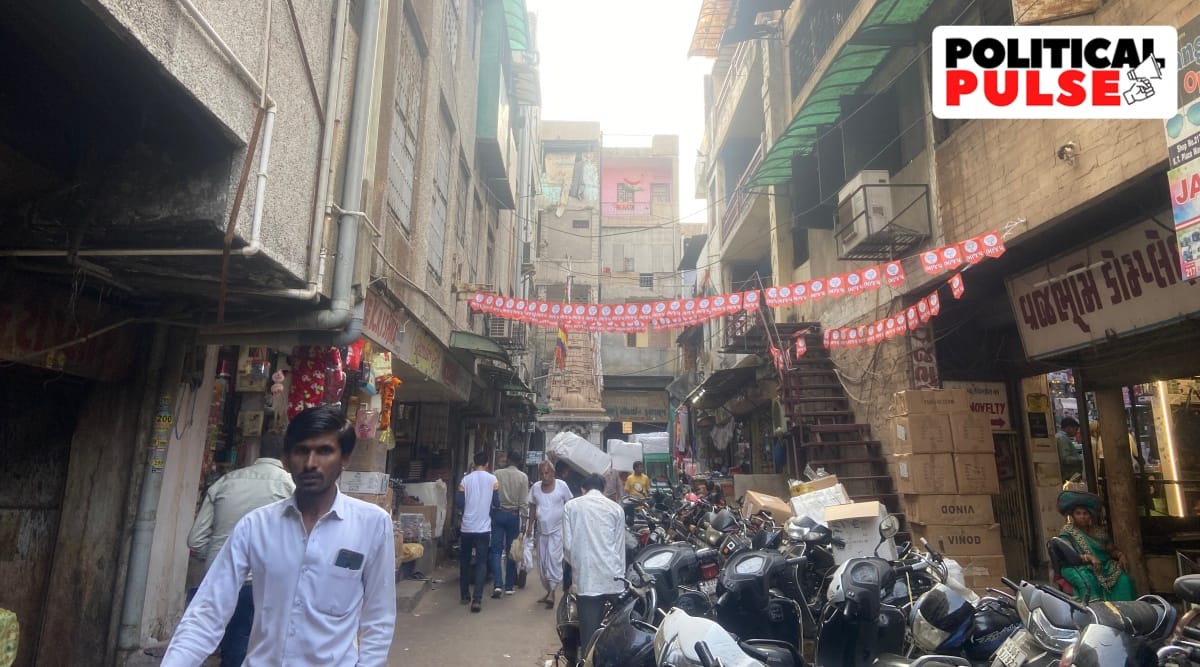 The backside of the K T Plaza building (left), which holds nearly 40 gold units on its third floor, with 200 labourers of Bengali origins on their rolls. (Express Photo by Sohini Ghosh)

COMMENTS made by actor and BJP leader Paresh Rawal regarding Bengalis and fish have stirred barely a whiff in the narrow bylanes of Manek Chowk in Ahmedabad, known for its night food market, jewellery units and their generations of Bengali artisans.

A 32-year-old explains why, the irony of his words dying in the loud sounds of Prime Minister Narendra Modi’s roadshow, his last for this campaign, passing by just 700 metres away. “See, us Muslim Bengalis, we do not face any opposition as far as non-vegetarian food goes, because the Disturbed Areas Act ensures that we remain restricted to living with Muslim neighbours,” he says, in a mix of Gujarati and Bengali.

As for Bengali Hindus, the jewellery unit owner, who does not want to identify himself, gives the example of a friend of his father’s: “He would come to our house to cook meat and fish, and then take it back to his home to eat.”

Rawal’s remarks are just “poll noise” for Manek Chowk, troubled by other pressing issues. Addressing a rally in Valsad Tuesday, Rawal, a former MP from Ahmedabad East, said jobs and gas cylinder prices were not the real issues: “What will happen if Rohingya migrants and Bangladeshis start living around you?… Cook fish for the Bengalis?” Following an uproar, and an FIR filed in Kolkata, Rawal said his remark was targeted purely at illegal immigrants, and offered an apology.

However, Rawal isn’t the first to throw the insinuation at them, or will be the last, say the residents of Manek Chowk, who complain of abysmal living and working conditions, and frequent police harassment. And, above all, of the Disturbed Areas Act – which ensures there is no breaking away from the vicious circle.

Under the Act, a district collector can notify a particular area as “disturbed”, citing incidents of communal tension, after which transfer of any immovable property between two parties can only take place with the collector’s nod. A third party can raise objections to stop the sale, and this is often the hurdle when the deal is between two parties of different religions.

K T Plaza, a decrepit four-storey building with a narrow staircase, holding nearly 40 gold manufacturing and casting units on the third floor, some as small as 36 sq ft, employing around 200 labourers of Bengali origins, is one of many in Manek Chowk. The owners are referred to euphemistically as “seths (moneybags)”. K T Plaza, a decrepit four-storey building with a narrow staircase, holding nearly 40 gold manufacturing and casting units on the third floor, some as small as 36 sq ft, employing around 200 labourers of Bengali origins, is one of many in Manek Chowk.

There is one bathroom on the third floor for the 200, who work for an average 10-12 hours a day in windowless rooms, squatting on the floor, working on gold or silver pieces. Many units employ children. Most of them struggle with fumes of sulphuric acid, used for refining gold.

The 32-year-old, a fourth-generation migrant to Ahmedabad, is a “seth” too, owning two units with his father. They have nine people on their rolls, and every day is getting more difficult, he says. The demand for jewellery has fallen due to high gold prices and lower purchasing power, while the family struggles to expand or move out due to lack of options.

Outside his Jain Silver Shop foundry, a 34-year-old says he first came to Ahmedabad from Bengal as a child of 12. “My family is still in Midnapore. How can I bring them here when expenses are high?”

Like him, many of the labourers here are from West Midnapore in Bengal, apart from Hooghly, Purba Burdwan and Howrah districts. Apart from Manek Chowk, they are the lifeline of other commercial areas in the neighbourhood where jewellery foundries abound, such as Sheth ni Pole, Ratan Pol and Pir Mohammad Shah Road. Several complexes / buildings here have signages in Bengali language.

“All over India, Bengalis make the best jewellery artisans and Marwaris do the best meena work,” says one worker.

Complaining of police harassment, which is why most of them do not want to be identified, the 32-year-old says it is a tactic to extort money. “Ease of doing business should be easy for all communities, not any particular one,” he says, adding: “I will keep that in mind while voting.”

At Sahjanand Market at Sheth ni Pole, a 41-year-old Muslim Bengali seth, operating a gold unit with 35 labourers, also talks of police harassment as the “biggest issue”. “Police come in suddenly and frequently, and this has been going on for decades,” the 41-year-old says, adding that leaders are not bothered about them as “most of the people working here are not voters”.

A college dropout, the 41-year-old is a first-generation migrant. Running his business and living in Danilimda for 16 years, delivering finished goods to bigger jewellery showrooms, he says he is not sure if he will vote this time. “Where I work and where I live, both Assembly seats are held by the Congress. But our lives have hardly changed over decades.”

The situation is worse for the Bengali settlers living in hutments around a dried-up Chandola lake, in Danilimda constituency. Despite voter ID cards, they say, they are often accused of being illegal Bangladeshis.

Incumbent MLA Shailesh Parmar of the Congress says: “I have raised this in the Assembly that the government should conduct a survey, rehabilitate those residing here and develop the lake. But the BJP government has no interest because this area is Muslim-dominated… They want to keep this issue alive for polarisation.”

Parmar adds that about 400-500 jhuggis in the constituency have Bengalis, most of them Muslims, “who have been staying here for years, even decades”.

The Jamalpur-Khadia Assembly constituency under which Manek Chowk falls is held by the Congress’s Imran Khedawala. The Lok Sabha seat, Ahmedabad West, is held by the BJP’s Kirit Solanki.

While Khedawala could not be reached for comment, BJP candidate Bhushan Bhatt says his estimate is that “700-800 Bengalis” who work in the constituency are voters. He has never been told about police harassment by them, Bhatt says. “If we receive representations, we will surely work on the same.”

The Aam Aadmi Party’s Jamalpur-Khadia candidate, Harun Nagori, refuses to comment on issues such as the Disturbed Areas Act, police harassment and accusations faced by settlers of being illegal immigrants. “We don’t want to talk about this. We only want to talk about schools and hospitals,” he says.

The worst part, the 32-year-old unit owner of K T Plaza says, is that there is no getting away for them. The Disturbed Areas Act keeps them bound, to both these places and their migrant identities.

“While we don’t want to move out because we have everything here, raw materials, purchasers, we cannot even if we wish to. The Act means no Hindu is going to sell a shop to us. Even if they do, the collector’s office will ask for an NOC from all the neighbouring units and shops and it is practically impossible to get it from all,” says the 32-year-old, who lives in Maninagar, an Assembly seat represented by Modi for 12 years as Chief Minister.

Among Mumbai children who died of measles, many were unvaccinated