Road to 2024 | Rahul may have stuck to his guns on Savarkar, but will the party too?

In his remarks, Rahul was consistent on Savarkar, but the Congress has lately vacillated on both political and economic issues, such as the New Pension Scheme 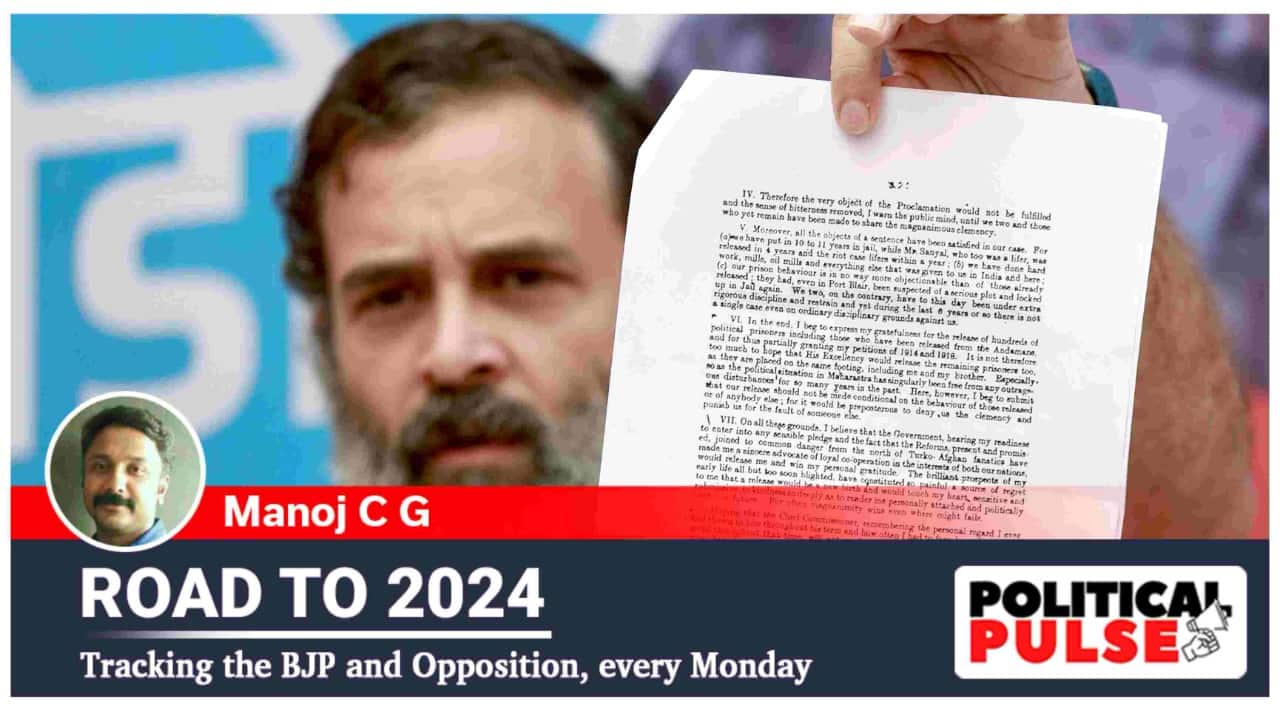 Rahul Gandhi has always been trenchant in his criticism of the Sangh. Attacking Savarkar was not new for him either. (File)

Nearly two-and-a-half decades ago, at its Pachmarhi Chintan Shivir, which was known more for the stand the party took on alliances, the Congress had emphatically reaffirmed its commitment to secularism and declared that it will “unflinchingly” meet the challenge posed by “communal forces” — among them the Shiv Sena.

In 2019, over two decades later, the party diluted its position when it allied with the Sena to keep the BJP out of power in Maharashtra. It was an a la E M S Namboodiripad moment for the Congress. The legendary Communist leader had in the 1980s declared that he would even ally with the devil to defeat the Congress, then the main pole in Indian politics.

The Congress’s decision to shed its opposition to the Sena had stunned many in the party.

Some of them had remembered the 1998 Pachmarhi resolve which had said the party will “unflinchingly meet the challenge of the communal forces as represented by the BJP and its associates in the Sangh Parivar, such as the RSS, the VHP and the Bajrang Dal, and those outside, such as the Shiv Sena, with no compromise or dilution of the well-established principles and practice of secularism, defined and evolved by the party as crucial to our nationhood”.

Sonia Gandhi, who had just taken over as the Congress president, had said in Pachmarhi: “The question we must ask ourselves is whether we have in any way diluted our commitment to the fight against communal forces. It would perhaps be tempting to say we have not. However, there is a general perception that we have at times compromised with our basic commitment to the secular ideal that forms the bedrock of our society”.

Rahul Gandhi’s unabashed criticism of right-wing hero V D Savarkar in Maharashtra is hence interesting and significant. The timing of his comments may have been unfortunate since they came in the middle of campaigning for the Gujarat Assembly elections. Moreover, they came in Maharashtra, where Savarkar is revered more for his cultural contributions, and despite Congress leaders of the state cautioning him against them.

The Shiv Sena, of course, was upset.

But Rahul has always been trenchant in his criticism of the Sangh. Attacking Savarkar was not new for him either. The merit of Rahul’s remarks on Savarkar can be debated and hotly contested from historic and political points of view, but despite the timing and the setting, Rahul has perhaps shown that he is consistent and his party should not fret. In fact, it was a welcome reassertion of what has been his party’s principled position.

Advertisement
Read |Road to 2024 | As Modi makes the poll contest personal, can Congress keep the focus on issues?

But will the Congress show the courage to come out of the embrace of the Sena if it really does believe strongly in adhering to the secular ideology? Can it afford to do that given that the 2024 Lok Sabha battle is a kind of do-or-die moment for it? The Sena still wears its hardline Hindutva ideology on its sleeves. It has never been sheepish about the role of its workers in the demolition of the Babri Masjid or its admiration for Savarkar.

So is Rahul’s oft-repeated assertions on secularism half-hearted?

After all, the Congress has always tried to position itself as a centrist party and its sway to the Left and Right for electoral and political considerations has dented its credibility over the years. If the party allied with the Sena in Maharashtra in 2019, it entered into a disastrous tactical understanding with the Indian Secular Front (ISF), a party formed in January by Abbas Siddiqui of the Furfura Sharif shrine in West Bengal’s Hooghly district, for the West Bengal Assembly elections in 2021.

If the Sena was upset, the DMK, another ally of the Congress, too may not have been pleased this month when the Congress severely criticised the Supreme Court for ordering the premature release of all six remaining convicts who were serving life sentences in the Rajiv Gandhi assassination case, calling the judgment “highly problematic”, “completely erroneous” and “totally unacceptable”. But the Congress did not baulk.

But if this is the Congress’s position, be it the Sena or the DMK, it should ensure that there are no inconsistencies in its approach — both political and economic – with dilutions in the past having dented its political credibility. Especially since the party often attacks Prime Minister Narendra Modi on dilution of his positions on GST, Aadhar and MNREGS.

The Congress’s reversal of its position on the New Pension System is one such dilution of its economic principles. For a party which proudly proclaims itself as the architect of India’s economic reforms, the move seemed nothing but pandering to the hustings. It was more or less a sway to the Left.

It was the UPA government under Prime Minister Manmohan Singh that took the New Pension System to its logical conclusion in 2013 by passing the Pension Fund Regulatory and Development Authority Bill despite stiff opposition from the Left parties and the Trinamool Congress. On the contrary, the party’s opposition to the GST was in the way it was rushed through and implemented. It never went back on its commitment to the GST.

Felt pain of farmers, youth and tribals after meeting them during Bharat Jodo Yatra: Rahul Gandhi