She became president when the party was down to 3 states and 141 MPs, faced divisions and rising BJP; Kharge has an additional burden: the large Gandhi shadow 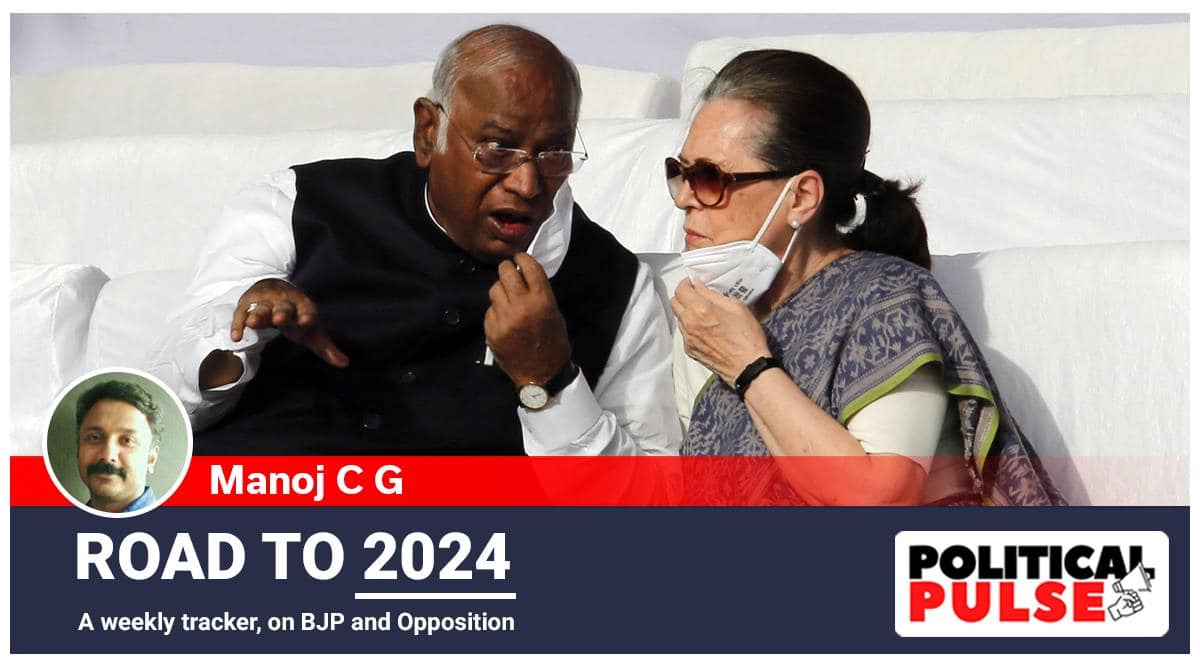 As Mallikarjun Kharge formally takes over as Congress president Wednesday, these words of his predecessor spoken two-and-a-half decades ago must still be ringing in his ears. (file)

“I am no saviour as some of you might want to believe. We must be realistic in our expectations. The revival of our party is going to be a long-drawn process, involving sincere hard work, from each and every one of us,” Sonia Gandhi had famously said in her first address as Congress president, at the AICC session in April 1998.

As Mallikarjun Kharge formally takes over as Congress president Wednesday, these words of his predecessor spoken two-and-a-half decades ago must still be ringing in his ears. Sonia had an arduous task at hand and the challenges before Kharge – an 80-year-old veteran – are no less daunting.

It took six long years for Sonia to heal the wounds of divisions in the party – in the wake of the election losses of 1996 and 1998, followed by a split in the party over her “foreign origins” – and energize the rank and file and leadership to fight back the BJP’s rise and bring the Congress back to power in 2004.

Rahul Gandhi, who became president replacing her in 2017, could not do much nationally, despite the fact that the Congress returned to power in three heartland states – Rajasthan, Chhattisgarh and Madhya Pradesh — when he was at the helm.

Kharge’s candidature has in a way united the party, but the challenge before him is more or less of the same nature.

When Sonia took over in 1998, the Congress was in power in just three states — Madhya Pradesh, Odisha and Mizoram, with Digvijaya Singh, J B Patnaik and Lal Thanhawla the respective Chief Ministers. Now it is in government in two states – Rajasthan and Chhattisgarh.

Just a month before Sonia presidency began, the Congress had slumped to 141 seats. But the tally was still nearly thrice of what it is now.

Kharge is staring at a fundamentally altered political battlefield. Apart from Narendra Modi, the most formidable adversary the Congress has faced since Independence, political parties like the Aam Aadmi Party, Trinamool Congress and even the AIMIM are trying to occupy its space.

Plus, as his in-house critics say, Kharge will have a thankless job. Rahul Gandhi is on the road, trying hard to breathe life into the party and cadre. Credit for an electoral revival, if and when that happens, would be his. All success in the near future would be attributed, and rightly so, to the Bharat Jodo Yatra.

That is an occupational hazard for which Kharge would be prepared, believing like most Congressmen that the Yatra is the party’s best hope to a revival. However, it is unlikely he will have much elbow room either to unveil programmes and organisational reforms of his choice to make his mark.

The organisational reform roadmap as laid out in the Udaipur declaration is before him like a fait accompli. Kharge has already made it clear that implementing the Udaipur resolve will be his first and utmost priority.

As for programmes, the entire attention of the party is currently focused on making the Rahul-led Bharat Jodo Yatra a success as it enters central India and the Hindi heartland – the areas from where the party is erased, or is struggling to hold on – in the days to come.

But, without disturbing the yatra, Kharge can travel to states where Rahul won’t be traversing through. For instance, Bihar, Odisha and West Bengal, states where the Congress has been out of power for decades and appears to have pushed to the back of its priority list.

Tamil Nadu can be another focus state. Uttar Pradesh is the elephant in the room for the Congress, but the state with the largest number of Lok Sabha seats is handled directly by Priyanka Gandhi Vadra.

In another parallel to 1998, some months after Sonia became Congress president, the party held a Pachmarhi Vichar Manthan Shivir where a decision was taken to accord “highest priority to the revival and renewal of the party” in Uttar Pradesh, Bihar, and Tamil Nadu. That went nowhere.

Apart from Bihar, Odisha and West Bengal, the Bharat Jodo Yatra will not pass through Jharkhand, Chhattisgarh and Uttarakhand, the election-going states of Gujarat and Himachal Pradesh, as well as the entire Northeast.

Kharge could focus on these states even as appointing four vice-presidents or working presidents for the four regions to bring more attention on organisational revival. The fact that the gentle leader is not seen as a threat by any section of the party is a factor to his advantage.

A Dalit leader, Kharge could potentially woo the SCs back into the party fold as well, apart from the other marginalised groups such as the tribals. The decline of the BSP and Mayawati’s long spells away from public life between elections have helped the BJP sway Dalits even in Uttar Pradesh.

As Sonia said in 1998: “I have come to this office at a critical point in the history of our party. Our numbers in Parliament have dwindled. Our support base among the electorate has been seriously eroded. Some segments of the voters, including tribals, Dalits and minorities, have drifted from us. We are in danger of losing our central place in the polity of our country as the natural party of governance.
She could well have been speaking for Kharge.

Sindhu back in top 5, Prannoy moves to 12th in latest BWF rankings