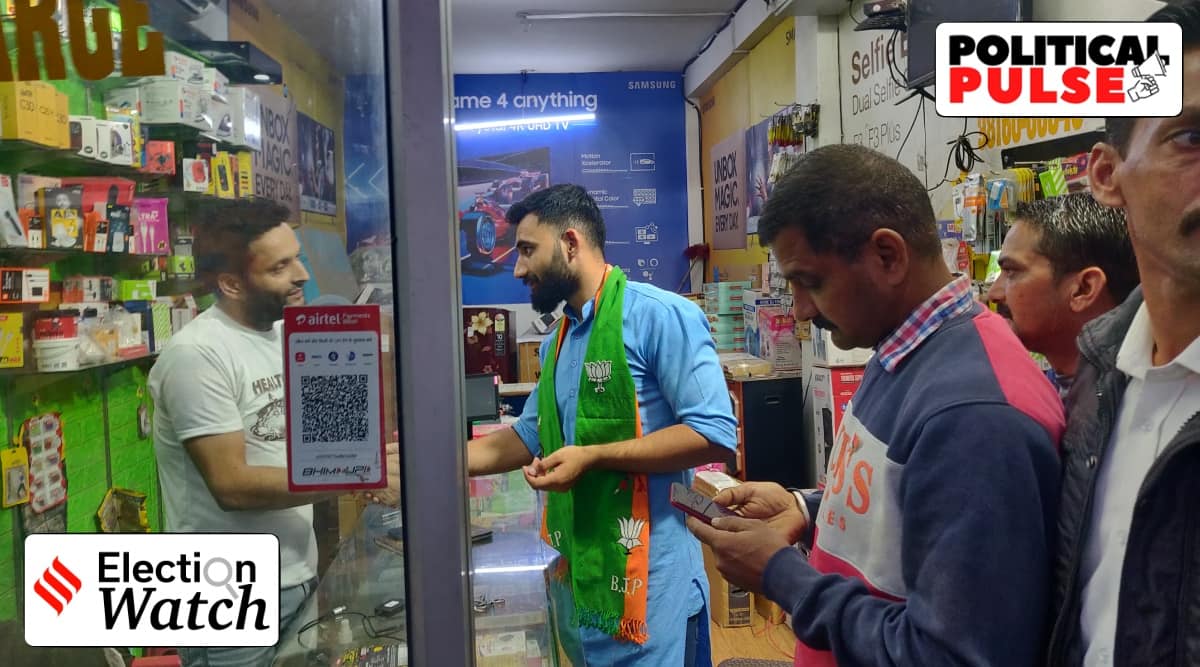 “Main Harish Nadda, J P Naddaji ka beta,” says the 27-year-old, the younger of the two sons of the BJP national president, who has hit the campaign trail in the family’s home district, where the party is possibly facing its biggest rebel challenge in the state.

The locals approve, seeing in the Supreme Court and Delhi High Court lawyer the next leader from the family and a future candidate. Blessing Harish in Kandrour village, a woman assures him that her vote is with the BJP: “Mere mayke se hain voh (Naddaji is from my parent’s village).”

In two of Bilaspur district’s four constituencies, BJP rebels are in the fray, some of them considered to be Nadda’s own men, who refused to heed the party president’s appeal to step down. So, apart from the BJP, at stake is Nadda’s own clout here.

Harish, who studied law at the University of London, owns a law firm and is the founder of an organisation called ‘Youth for Bharat’, hands out a booklet of the Himachal Pradesh BJP along with a pamphlet by the local candidate, listing the BJP state government’s constituency-wise “achievements”.

A man in Kandrour recounts his old association with Nadda Sr as Harish greets him.

Also in Political Pulse |Rebels in its ranks too, Himachal Congress hopes Priyanka will be the X-factor

In Chalama village, Harish mingles with students, asking them what they are studying. He talks about the “33,000 food packets” he distributed during the first wave of the Covid pandemic and the “Rs 75 lakh worth relief material” he gave out during the second. He also claims to have distributed 500 sports kits in Bilaspur district and led an “intensive” campaign against drugs, reaching out to “about 5,000 youths in every school, ITI and College of Bilaspur”.

Harish further promises to set up 45 gyms in the district. His team talks about the sessions he has held at Gaiety Theatre, Shimla, to encourage theatre artists.

On the BJP rebels in the race, Harish says: “This is not going to have any impact on our nominees.” He talks about how the brother of one of the rebels, Subhash Sharma, contested as an Independent in the last zila parishad elections and got “only 700 to 800 votes”, despite Sharma backing him. “So they don’t have any vote bank.”

Nadda’s native village Vijaypur is nearby, with posters dotting the walls listing the initiatives of the “double engine” government (the BJP governments in the state and at the Centre), such as the AIIMS and IIM for Himachal, the Atal Tunnel providing all-weather connectivity to Lahaul-Spiti, an international airport and welfare schemes for the people.

The road leading up to the village though is patchy. Harish admits there is work left to be done, adding that the road could not be repaired due to a legal dispute involving some localities.

As locals talk of the matter being stuck in court, Maan Singh, an elderly farmer from the Amarpur village nearby, says he is not impressed. “Kaun sa tabka khush hai sarkar se? Naukripesha khush nahin, kisan khush nahin (Tell me which group is happy with the government? Employees are not happy, farmers are not happy).”

While adding that he doesn’t care for “these big names”, Singh warns that the Congress may be worse. “Enna ne taan tawaade tauve vi lai jaane (They will take away even your cooking pans).”