‘Parliament duty-bound to address issue, am sure it will do so’ 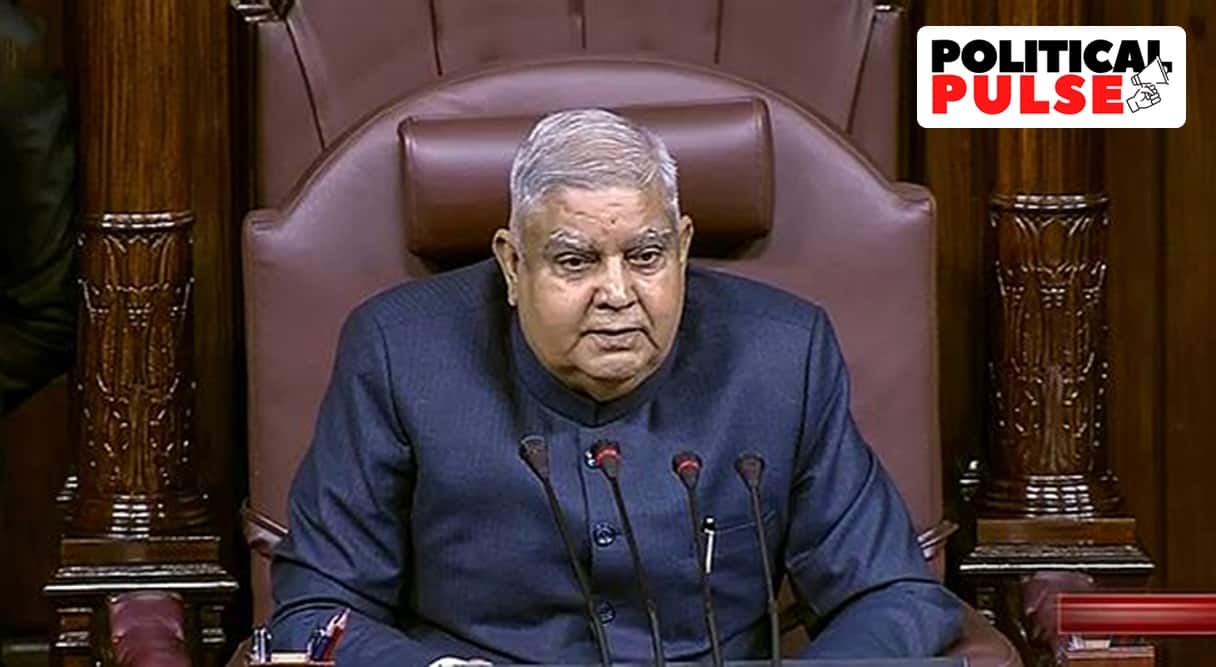 Presiding over Rajya Sabha for the first time as Chairman on the opening day of the winter session of Parliament, Vice-President Jagdeep Dhankhar sent a strong message Wednesday to the Supreme Court, referring to its 2015 judgement striking down the National Judicial Appointments Commission (NJAC) Act and calling it a “glaring instance” of “severe compromise” of parliamentary sovereignty and disregard of the “mandate of the people”.

He said Parliament, being the custodian of the “ordainment of the people”, was duty-bound to “address the issue” and expressed confidence that “it will do so”.

Must Read |Adhir Ranjan Chowdhury has a wish list for Parliament’s Winter Session: Prime Minister should listen to the Opposition

Dhankhar also said it was time for “all constitutional institutions to reflect and give quietus to public display of adversarially challenging stance/trading or exchange of advisories emanating from these platforms”.

The Opposition is planning to seek a discussion on alleged government interference in the functioning of constitutional bodies including the faceoff with the judiciary.

The Vice-President’s remarks are a reiteration of what he said last week. Referring to the striking down of the NJAC Act, Dhankhar, while sharing the dais with Chief Justice of India D Y Chandrachud at the 8th Dr L M Singhvi Memorial Lecture in New Delhi on December 2, said it was “never too late to reflect”. He underlined the “primacy of the will of the people” and said “that power was undone” and “the world does not know of any such instance”.

Last month, Union Law Minister Kiren Rijiju had said that the Collegium system of appointing judges was “opaque” and “not accountable” and “alien” to the Constitution. His remarks attracted the displeasure of the Supreme Court.

In the House, the Vice-President pointed out that “democracy blossoms and flourishes when its three facets, the Legislature, the Judiciary and the Executive, scrupulously adhere to their respective domains”. He said “the sublimity of Doctrine of Separation of Powers, is realised when the Legislature, Judiciary and Executive optimally function in tandem and togetherness, meticulously ensuring scrupulous adherence to respective jurisdictional domains.”

“Any incursion by one, however subtle, in the domain of the other, has the potential to upset the governance apple cart. We are indeed faced with this grim reality of frequent incursions,” he said.

The Rajya Sabha, Dhankhar said, is “eminently positioned to take affirmative steps to bring about congeniality amongst these wings of governance.” He asked the members to reflect and engage “in a way forward stance”.

He said “Parliament is the exclusive and ultimate determinative of the architecture of the Constitution.”

He spoke on the power of Parliament to act in exercise of its constituent power to amend any provision of the Constitution in accordance with the procedure.

He said that power is “unqualified and supreme, not amenable to executive attention or judicial intervention except for the purpose of deciding any case involving a substantial question of law as to interpretation of the Constitution envisaged in Article 145 (3) of the Constitution.”

“In a similar vein, the Parliament in a much needed historic step passed the 99th Constitutional Amendment Bill paving way for the National Judicial Appointment Commission (NJAC). There was unprecedented support… On August 13, 2014, the Lok Sabha unanimously voted in its favour with there being no abstention. This House too, passed it unanimously on August 14, 2014 with one abstention. Rarely in Parliamentary democracy, there has been such massive support for a Constitutional legislation,” he said.

“This historic parliamentary mandate was undone by the Supreme Court on October 16, 2015 by a majority of 4:1 finding the same as not being in consonance with the judicially evolved doctrine of ‘Basic Structure’ of the Constitution.”

“There is no parallel to such a development in democratic history where a duly legitimised constitutional prescription has been judicially undone. A glaring instance of severe compromise of parliamentary sovereignty and disregard of the mandate of the people of which this House and the Lok Sabha are custodians,” he said.

Asking members to bear in mind that the “Basic” of any “Basic Structure” in democratic governance is the prevalence of primacy of the mandate of the people reflected in Parliament, he said “it is disconcerting to note that on such a momentous issue, so vital to democratic fabric, there has been no focus in the Parliament, now for over seven years.” “This House, in concert with the Lok Sabha, being custodian of the ordainment of the people, is duty-bound to address the issue, and I am sure it will do so,” he said.

Advertisement
Should Read |RS biggest strength of country, will be torchbearer of world in achieving SDGs’: PM Modi

Dhankhar also sent a message to those manning the three arms of the Constitution, saying “authorities in constitutional positions in any institution are required to exemplify their conduct by high standards of propriety, dignity and decorum.”

He said it was the “institutional seamless connect, marked with mutual trust and respect, that generates an ecosystem best suited for serving the nation.”

“This House needs to catalyse this wholesome environment to promote synergic functioning of Constitutional institutions, emphasising the need to respect Lakshman Rekha,” he said.

Dhankar also expressed concern over frequent disruptions of the House. “Obstruction and disruption of proceedings as parliamentary practice or option are antithetical to democratic values… We need to be cognizant of severe public discomfort and disillusionment at lack of decorum in the temple of democracy,” he said.

Earlier, Prime Minister Narendra Modi led the House in welcoming Dhankar. Cutting across party lines, leaders lavished praise on him. Member after member from the Opposition, led by Leader of the Opposition Mallikarjun Kharge, urged the Chair to give the Opposition its due space in the House and allocate more time to members of smaller parties.