Rahul’s shadow: Congress leader’s ‘biggest fan’ a constant at his rallies since 2011 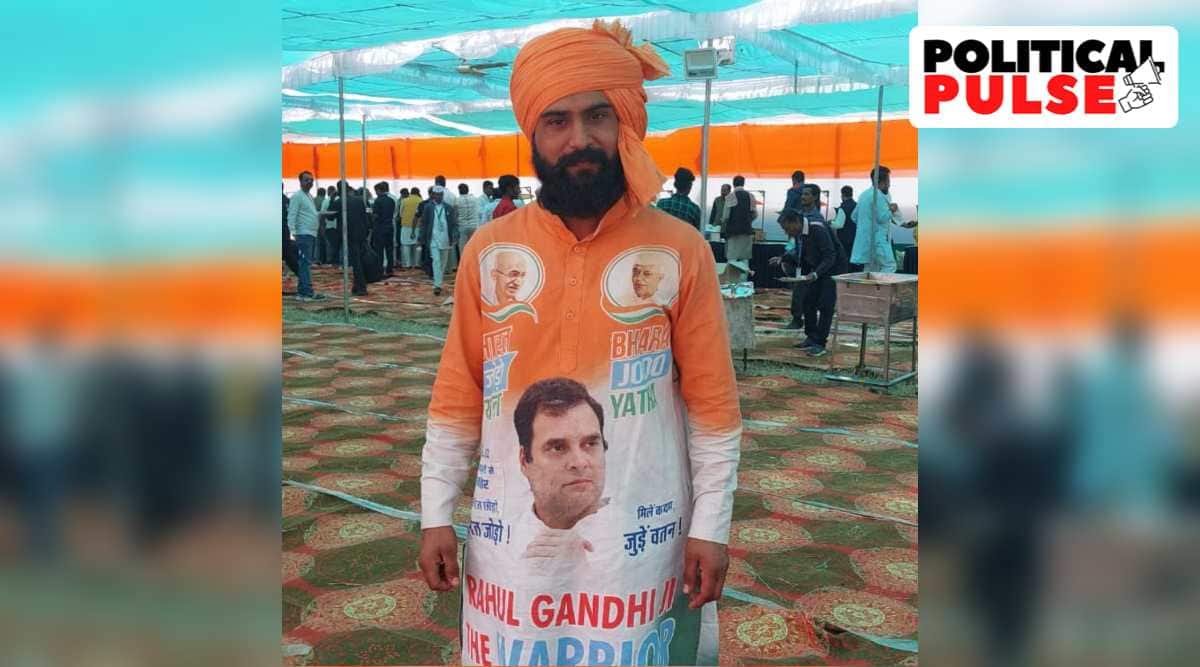 A law graduate from Jind in Haryana, Dinesh, sporting a saffron turban and wearing a tricolour dress, is hard to miss in any Rahul rally.(Express Photo)

Dinesh Sharma was limping. He suffered a minor cut on his left leg on Sunday but that doesn’t stop him from posing for selfies with enthusiastic Congress supporters. Congress workers recognise him as the fanatic young Rahul Gandhi fan who is present at all his rallies waving a party flag and, of late, the national Tricolour.

And here in Indore, where the Bharat Jodo Yatra has reached, Congress workers want to click a selfie with him as they saw Rahul calling him to the stage on Saturday while addressing a public rally in Mhow, the birthplace of BR Ambedkar. Rahul was giving a theoretical exposition of the importance of the Tricolour by linking it to the Constitution. Gandhi then launched a political attack on the BJP and the Rashtriya Swayamsevak Sangh (RSS), accusing them of denigrating the Constitution.

“Dinesh upar aayiye zara (Dinesh, come up on stage). I want to show you (the crowd) today…we will unfurl the Tricolour in Srinagar. I showed you the Tricolour for a reason … Stay here, Dinesh. Stay here, stay here. Everyone should see it … This Tricolour which we are taking to Srinagar today is a symbol and it has no meaning without the Constitution. The Tricolour derives its strength from our Constitution,” Rahul said.

A law graduate from Jind in Haryana, Dinesh, sporting a saffron turban and wearing a tricolour dress, is hard to miss in any Rahul rally. He walks barefoot and has been a presence at the Congress leader’s public meetings since 2011. And since September 7, the day the Bharat Jodo Yatra began from Kanyakumari, he has been walking with Rahul. His stated ambition is to see Rahul as the Prime Minister.

Dinesh calls the adventure of the last 11 years a “tapasya (penance)”. “I wanted to do something for the country,” he says when The Indian Express caught up with him. “We have heard about Indira Gandhi and her sacrifices for the country. Jawaharlal Nehru and his contribution. So I used to think who can make India shine in the world again? And I took a pledge that the only leader in the country is Rahul Gandhi and I have to wage a struggle with him and won’t stop till he becomes the Prime Minister of the country.”

Also Read |Irani attacks Rahul: ‘Which type of people is he leading yatra with?’

He goes on to say, “So I took a pledge that I will follow him wherever he goes barefoot, wearing a dress with Rahul’s picture on it. I have tried to attend every Rahul Gandhi event across the country, be it public meetings or roadshows. And from day one till today, I have spent money from my own pocket.” It is another matter that the Congress has now given him a container — like one which Rahul and his fellow yatris are using.

Dinesh says Rahul started recognising him in 2012 after he started making an appearance at his rallies. “It was in Amethi. Rahul was campaigning for the Uttar Pradesh Assembly elections. I used to sleep at railway stations and pick up newspapers to see where Rahul’s programme was. And I used to reach that spot. He used to see me every day. He asked me one day, ‘You are doing all this for me, what can I do for you?’ I told him, ‘Bhaiyya, I don’t want anything…I will do this tapasya for you.’ Since then, he has not asked that question again.”

Dinesh says his father is a farmer and he has one younger brother and two sisters. He is single. “It was difficult initially. But after some time my family also understood my junoon (passion),” he says. Since he began walking with Rahul, Dinesh has slightly modified his attire. “Since the Yatra is not a party affair, my dress does not have the party symbol or any mention of the Congress. You can see the photographs of Mahatma Gandhi, Jawaharlal Nehru, and Rahul Gandhi and mention of the Yatra … I have given rest to the Congress flag. I have given politics a rest. I am carrying the national flag.”

Dinesh says Rahul now considers him family. “I am 28-29. I have celebrated my birthday only once. That was when Rahul Gandhi gave him a surprise in Wayanad during the campaign for the 2019 Lok Sabha elections. Boss gave me a surprise. He had made the entire arrangement, including a cake. I was pleasantly surprised. He showered love on me,” Dinesh says at the camp where the Yatra, on the way to Indore, took the morning break.

Dinesh was back walking with Rahul and waving the Tricolour as the Yatra resumed in the afternoon after a five-and-a-half-hour break.

Protests against Adani port in Vizhinjam: All you need to know