Digvijaya gets a mouthful from Rahul: Ridiculous, we don’t ask Army for proof

Addressing a press conference during his Bharat Jodo Yatra here, Rahul said: “I don’t agree with what Digvijaya Singh has said. We completely trust our Army. The Army doesn’t need to furnish proof if it does something. I personally completely disagree with what he said.” 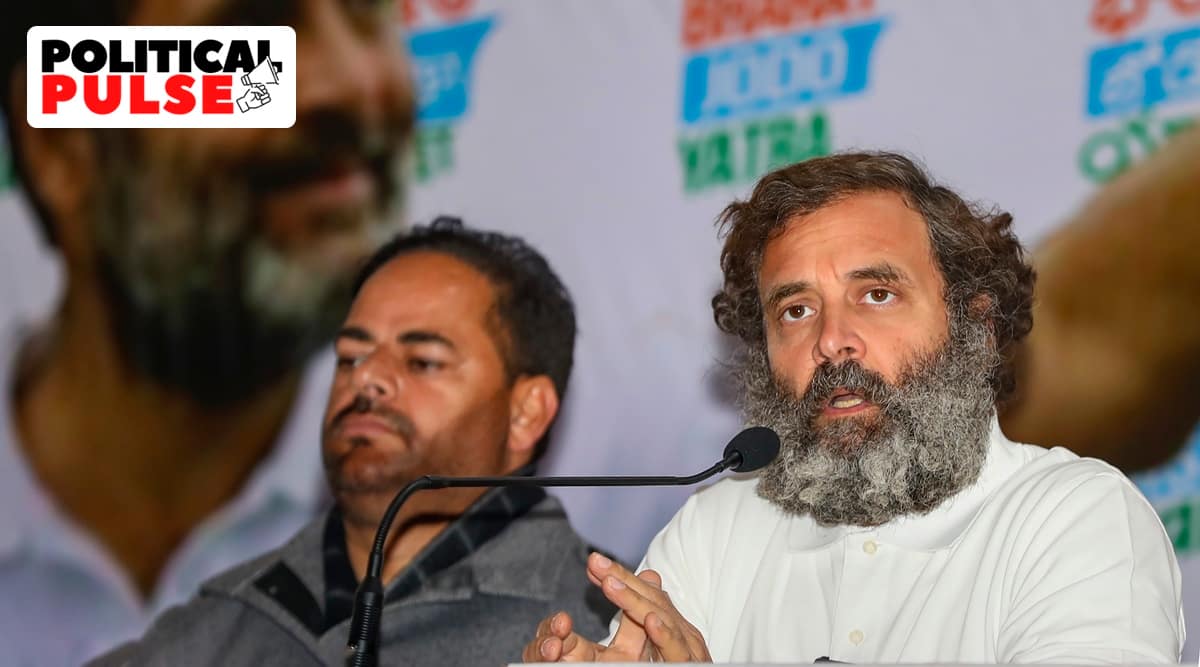 A DAY after party veteran Digvijaya Singh questioned the surgical strikes along the Line of Control (LoC) in 2016, senior Congress leader Rahul Gandhi sought to distance himself. Terming Singh’s remarks as “ridiculous”, Rahul underlined that he “completely disagreed”.

Addressing a press conference during his Bharat Jodo Yatra here, Rahul said: “I don’t agree with what Digvijaya Singh has said. We completely trust our Army. The Army doesn’t need to furnish proof if it does something. I personally completely disagree with what he said.”

Leaving red faces in the Congress, Singh on Monday questioned the surgical strikes, saying “no proof” was provided. He also raised questions about the 2019 terror attack in Pulwama, saying the government was yet to present a report in Parliament on “why 40 CRPF personnel had got martyred’’.

Following the backlash, Singh tweeted on Tuesday: “I have held our armed forces in highest esteem. Two of my sisters were married to Naval officers… There is no question of my asking questions to defence officials. My questions are to the Modi government.”

In a series of tweets, he said: “These are my valid questions to the Modi government. Don’t I as a responsible citizen have a right to know the facts? Who has been punished for this serious lapse? In any other country the Home Minister would have been made to resign.”

Singh’s remarks had drawn swift backlash from the BJP on Monday, which said the Congress was “blinded by hate” for Prime Minister Narendra Modi and it had “insulted” the country’s armed forces.

The Congress had distanced itself from Singh’s comments, with senior leader Jairam Ramesh saying they “do not reflect the position” of the party.

Asked why action was not taken against Singh, who has in the past too left the party red-faced with his remarks, Rahul said: “We are a democratic party. And we are not a dictatorship. We don’t run our party with principles of coercion. We don’t appreciate his personal views. But the views of the party are above Digvijaya’s views. The views of the party are generated from a conversation within the party. I would like to assure you that his views are outlying views. They are not views that are held by the centre of the party.”

“We are absolutely crystal clear that the armed forces do a job. They do a job exceptionally well and they do not need to be providing proof for anything,” he said.

Elaborating, he said, “It is in the culture of our party to allow conversations and sometimes, when those conversations happen, people who have extreme views air their views. So we try to manage a conversation. In the BJP and RSS, there is no conversation. They just decide that this is what is going to be and nobody can talk after that. It is like demonetisation. The Prime Minister gets up one morning and we are going to demonetise. Or like GST, where you completely destroy the backbone of the country because you are not having a conversation.”

Rahul also spoke about the row over BBC’s documentary on Modi and his Gujarat government’s response to the 2002 riots. “If you read our scriptures, if you read the Bhagavad Gita or the Upanishads, you will see that it is written in it that the truth cannot be hidden. The truth always comes out. So you can ban, you can suppress the press, you can control the institutions, you can use the CBI, ED and all this stuff, but the truth is the truth. Truth shines bright. It has a nasty habit of coming out. So no amount of banning, oppression and frightening people is going to stop the truth from coming out,” he said.

Meanwhile, BJP spokesperson Ravi Shankar Prasad said: “Rahul Gandhi, for the first time, said he respects the Indian Army. Could you not convince Digvijaya Singh who has been walking with you… Why did it take so many years for you to publicly state that you respect your armed forces?”

Criticising Rahul for his “vacillating” stand on the armed forces, Prasad also cited some of his previous remarks, including a recent comment in Dausa questioning the government’s handling of the border standoff with China and claim that the Chinese were “beating up” Indian soldiers.