Several persons coming to join the Bharat Jodo Yatra have now taken to wearing similar attire as the Congress leader. 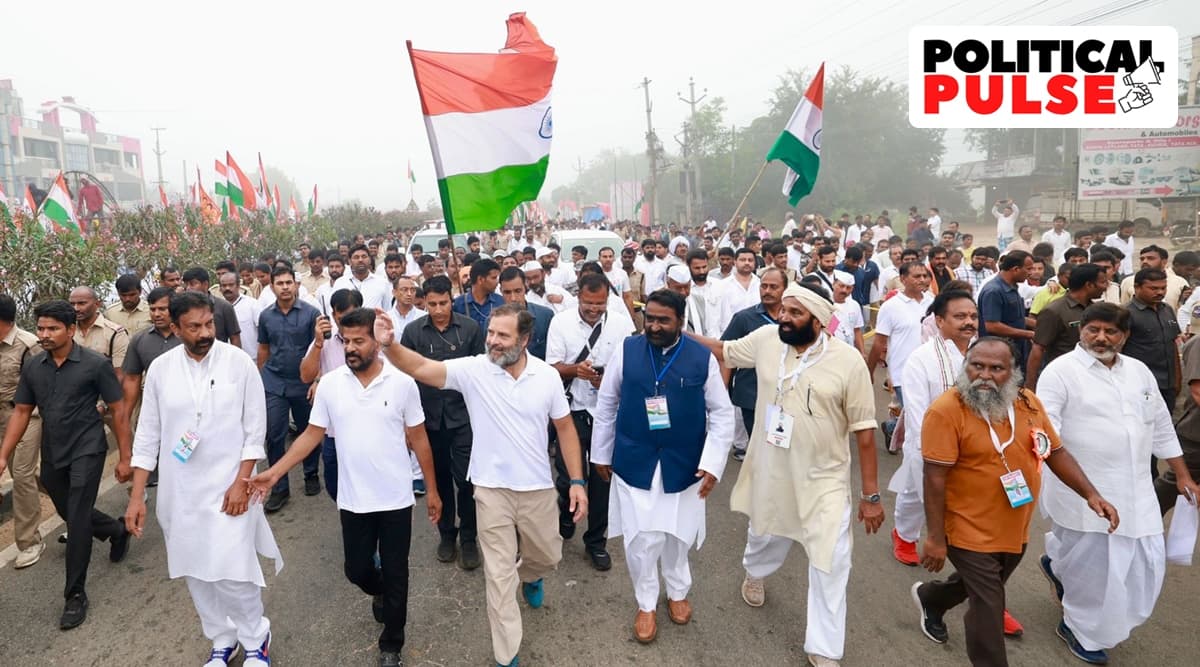 Over the last couple of days, several persons coming to join the Bharat Jodo Yatra have been seen wearing similar khaki trousers and white T-shirt that Rahul Gandhi has been sporting. (Twitter/INCIndia)

CONGRESS supporters are not just trying to match Rahul Gandhi step by step in his Bharat Jodo Yatra, but also thread by thread.

Over the last couple of days, several persons coming to join the Yatra have been seen wearing similar khaki trousers and white T-shirt that Rahul has been sporting during the 50-plus days of his march – ditching the tight jeans and shirts that many of them sported in the earlier days. Volunteers of some organisations like the Telangana Youth Welfare, including its president Syed Jalaluddin Zafar, who met Rahul on Wednesday also turned up in similar attire.

In his sartorial choice, Rahul is following in the footsteps of other long marchers before him in this part of the country — Y S Jagan Mohan Reddy, N Chandrababu Naidu and Telangana BJP President Bandi Sanjay.

In 2017, when Jagan began his over 3,500-km-long Praja Sankalp Yatra from his late father Dr Y S Rajashekara Reddy’s native village Idupulapaya, in YSR Kadapa district, he ditched his pin-striped shirts and fitted trousers in favour of a white full-sleeve shirt and loose-fitting brown trousers, both in cotton. Throughout the 341 days of the mega yatra, Jagan preferred the same attire, and his aides carried freshly ironed new pairs for a change during brief stopovers.

“Cotton is comfortable. The white full-sleeve shirt keeps me cool while out in the hot sun, and my hands are not exposed. Loose fitting cotton trousers are good for long walks,’’ he had said during an interview while on the walk near Chilakaluripet in Guntur district.

Jagan’s Praja Sankalpa Yatra remains the longest padyatra by any politician in the country, unless Rahul’s foot-march from Kanyakumari to Srinagar exceeds the 3,648 km that Jagan walked in Andhra Pradesh, ending on January 9, 2019, at Ichchapuram in Srikakulam district, near the Odisha border.

Jagan also beat his father’s record at the time, of a 1,500-km padyatra in 60 days, which he had started on April 9, 2003. During his march, YSR opted for a white full-sleeve shirt and a white dhoti.

The last to traverse Telangana before Rahul was the state BJP chief, Bandi Sanjay Kumar. He started his Praja Sangrama Yatra on August 28 last year, and has so far completed four phases covering over 44 Assembly constituencies and clocking over 1,200 km.

His sartorial preference has been a white full-sleeve cotton / khadi shirt and matching white trousers. “We walk in the sun the whole day during padyatras so white or shades of light brown keep us cool,’’ he says.

If it is an extremely hot day, Kumar ties a white or brown cloth over his head, which YSR also did.