Between polls, Yatra and constituency visits, home is where work is for leaders on Diwali

Gujarat and Himachal will keep top BJP leaders occupied, Bharat Jodo Yatra campsite will come alive with lights while others will squeeze in constituency visits amidst festivities 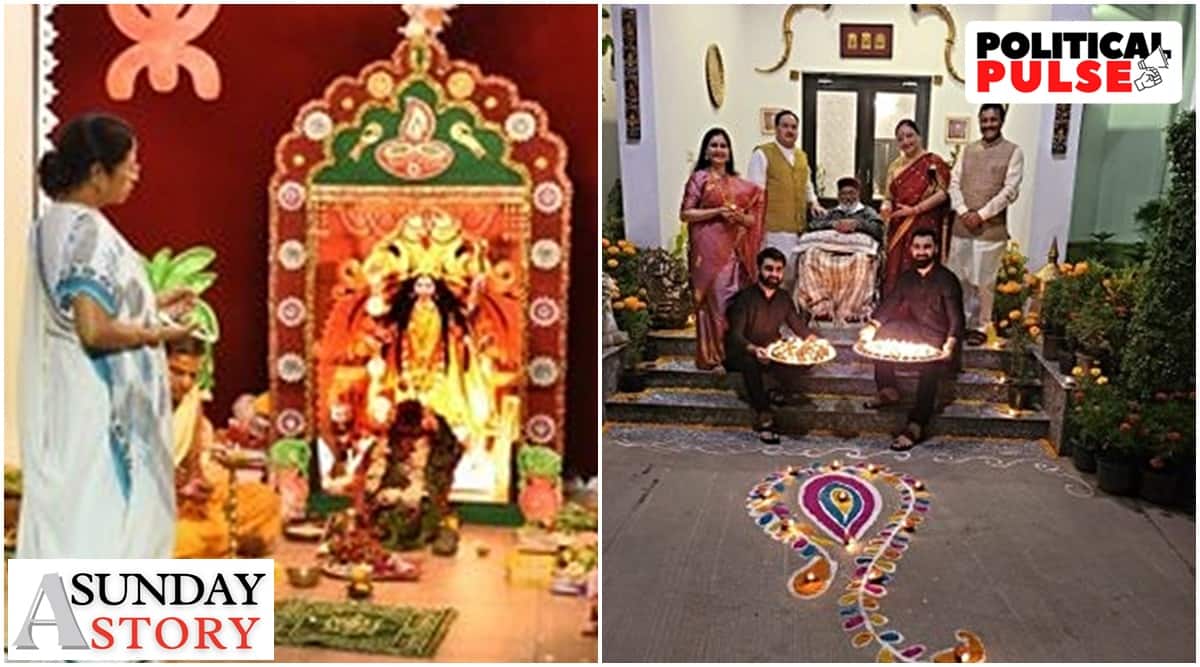 West Bengal CM Mamata Banerjee during Kali Puja at her home in 2017. The Kali Puja is an annual affair at the TMC chief's home during Diwali (Twitter: All India Trinamool Congress); BJP national president JP Nadda celebrates Diwali with family in 2021. (ANI)

Amid the sound and light of politics, and the fireworks of elections, this Diwali will be a working holiday for most top leaders. However, families are calling, admits a Bharat Jodo Yatri, who is looking forward to meet his niece over the Yatra Diwali break, even if reluctantly leaving the campsite where others like Kanhaiya Kumar are planning communal celebrations.

For some like Union minister Nitin Gadkari, there is no debate. On this day, he tries his best to pass on a family tradition of building mud forts, that is slowly disappearing in Maharashtra.

The BJP leader is set to spend Diwali busy in meetings for the coming Gujarat elections. According to sources close to him, Shah was busy with “meeting after meeting” on his birthday on Saturday and it will remain that way on Diwali and Gujarati New Year, which will be celebrated on Tuesday.

Shah reached Gujarat on Friday and will be in the state for six days, meeting booth, zonal, district and state BJP leaders. He has even left the Diwali pooja and other rituals to his family, and will be fully occupied with party work, said his aides.

J P Nadda: Poll-bound Himachal to be home this year

Nadda who celebrated last year’s Diwali with his family at his official residence in the national capital will be att his home district Bilaspur in Himachal Pradesh this time. He will be celebrating Diwali with his old friends as well as local BJP workers.

With Himachal Pradesh voting in the Assembly elections on November 12, Nadda does not want to be away from the state. On Monday, he will participate in Diwali celebrations at a Diwali Milan Samaroh at visit Bilaspur Dham.

It is family time for Nitin Gadkari. After returning from his official Australia trip on Saturday night, he will fly to Nagpur to celebrate the festival with his family.

According to sources close to the Union road transport minister, Gadkari and his wife will go shopping for their six grandchildren — the eldest among them is 12 years old and the youngest is just one — and other family members. Gadkari is particular about another thing. He helps his grandchildren construct mud forts, a dying tradition during Diwali in Maharashtra, outside their home. He makes sure that he gives them ideas and suggestions – from how to use the clay to putting the finishing touches on elaborate forts.

In the run-up to Diwali, Gadkari will host get-togethers for his friends, family members, and his staff at his residence. On Monday, Lakshmi puja will be held and on the day of Bhai Dooj (Wednesday), he will host his cousin sisters at his home.

Sitharaman usually spends Diwali with her family in Delhi. A devotee of Lord Venkateswara Swamy, the Union minister has just returned from a visit to the Tirupati temple in Andhra Pradesh with her family members. This year, her maternal uncle and his wife, who also accompanied her to Tirupati, are expected to join her on Diwali day.

Sources said Sitharaman prefers to conduct a pooja and other rituals on Diwali, with her close family in attendance.

Bharat Jodo Yatris: For most, home this year is the campsite

Kanhaiya Kumar is not going home this Diwali. For he doesn’t want to leave the Bharat Jodo Yatra campsite that has become a home away from home for him and the other 120-odd yatris accompanying Rahul Gandhi the whole way.

Almost half of his co-walkers, who have been on the road since September 8 when they assembled in Kanyakumari to begin the 150-day odyssey, have left for home. Rahul Gandhi, their leader, too will come tot Delhi for the first time in over a month.

The yatra will take a break for Diwali on October 24 and 25. And on October 26, senior leaders including Rahul will be at the party’s 24, Akbar Road, AICC headquarters when Mallikarjun Kharge formally takes charge as Congress president. The yatra will resume on October 27 in Telangana.

“Ek kahawat hai ki … Diwali main ghar soona nahin chodte hain (There is a saying, you should not leave your home empty during Diwali). We clean up our homes and light diyas. This container is our home for five months. It’s like a village which comes up every day for us in a new place. So this campsite is our village and the containers our home. Call it one BHK, two BHK or dormitory, it has been our home. So how can we leave our home on Diwali? Many people are going home. I have chosen to stay back. Somebody has to light up the home,” Kanhaiya told The Indian Express. Almost half of the yatris are staying back and will celebrate Diwali at the campsite.

Shalini Langer writes |Happy Diwali! From the other side

Many such as Vaibhav Walia, a secretary in the AICC communications department, are reluctantly returning home. “My family had been calling me. I couldn’t be with them on Dussehra. Although I am feeling bad leaving the campsite, I am going to Dehradun to be with my mother, brother and sister-in-law and my niece to spend Diwali with them. I have been missing my niece,” he said.

“I am feeling bad leaving the campsite because I am one of the organisers. But, my mother is keen to see me,” Walia said.

Like Kanhaiya, Youth Congress leader Pratibha Raghuwanshi too is staying back. “My town is very far from here. And I want to complete the yatra too. For us, this is our home now. So we will celebrate here,” Raghuwanshi, who is from Madhya Pradesh’s Khandwa, said.

She added, “I stay with my parents. My papa told me that you celebrate Diwali every year with us. This year, you celebrate with your friends. So, many of my Mahila Congress colleagues are staying back. We are planning to celebrate here. Our team has kept a surprise for us.”

AICC training department head Sachin Rao is headed to Delhi. “I feel really bad I won’t be with my colleagues who are staying back, because this is also home. We are torn between two homes,” he said. “I am going to Delhi. It is a three-day break. Not so much Diwali… yes, I will be with my family but I have some urgent pending work to complete. Then, Khargeji is also taking over.”

Every year in the run-up to Diwali, the former Rajasthan deputy chief minister and Tonk MLA meets fellow politicians, supporters and friends. On festival day, he makes it a point to offer prayers with family, and to not burst any firecrackers.

Former Rajasthan Deputy CM and Congress leader Sachin Pilot with his well-wishers at his Jaipur residence on Friday. The MLA from Tonk meets fellow politicians, supporters, and friends at his Jaipur home every year in the run-up to Diwali. (Credit: Sachin Pilot/Facebook)

“I will just spend time with my family, do pooja and we will have home-cooked food,” said Pilot, who will celebrate the festival in Jaipur.

The Rajasthan Congress president said that for years he has followed the same tradition on Diwali — spending it in his Assembly constituency Lachmangarh in Sikar district.

This year too, after offering the Diwali prayers in the evening, Dotasra will go door to door in his neighbourhood and the markets around to exchange greetings. “The next day, I will stay at home and host guests throughout the day. Except for the Covid years, this has been my tradition since long, including when I was a pradhan in 2005 and when I became an MLA for the first time in 2008,” Dotasra said.

Mamata Banerjee: An unbroken tradition since 1978

The West Bengal CM and Trinamool Congress (TMC) supremo will be busy at the annual Kali Pooja festivities held at her residence. The puja is being held since 1978 at Banerjee’s home on Harish Chatterjee Street near Kalighat in Kolkata.

The pooja is usually attended by TMC leaders, workers and supporters. Governors, including former governor Jagdeep Dhankar, have visited the CM’s residence during the pooja in the past.

“The pooja was held even during the height of the Singur and Nandigram movements as well as the first two years of the Covid-19 pandemic. It started after one of Banerjee’s brothers had a vision of Goddess Kali,” said a Trinamool leader.

Delhi CM and AAP supremo Arvind Kejriwal will celebrate Diwali with his family at home. Unlike previous years, the Delhi government is not organising the annual ‘Dilli Ki Diwali’ event that it started in 2019.

The inaugural edition was essentially a laser show at Connaught Place. In 2020, the Delhi Cabinet held a special Lakshmi Pooja on the Akshardham Temple premises. Last year, as part of the celebrations, a replica of the Ram Temple was built at the Thyagaraj Stadium in the Capital.

AAP’s Kalkaji MLA Atishi said the party’s MLAs were busy attending Diwali milans in their respective constituencies. “I am basically rushing from one Diwali milan to another. It is a great occasion to connect with people amid festive fervour,” she said.