In gestures and words, PM went out of his way to put the Maharashtra CM at ease during his Mumbai visit, counter Opp claims of rift 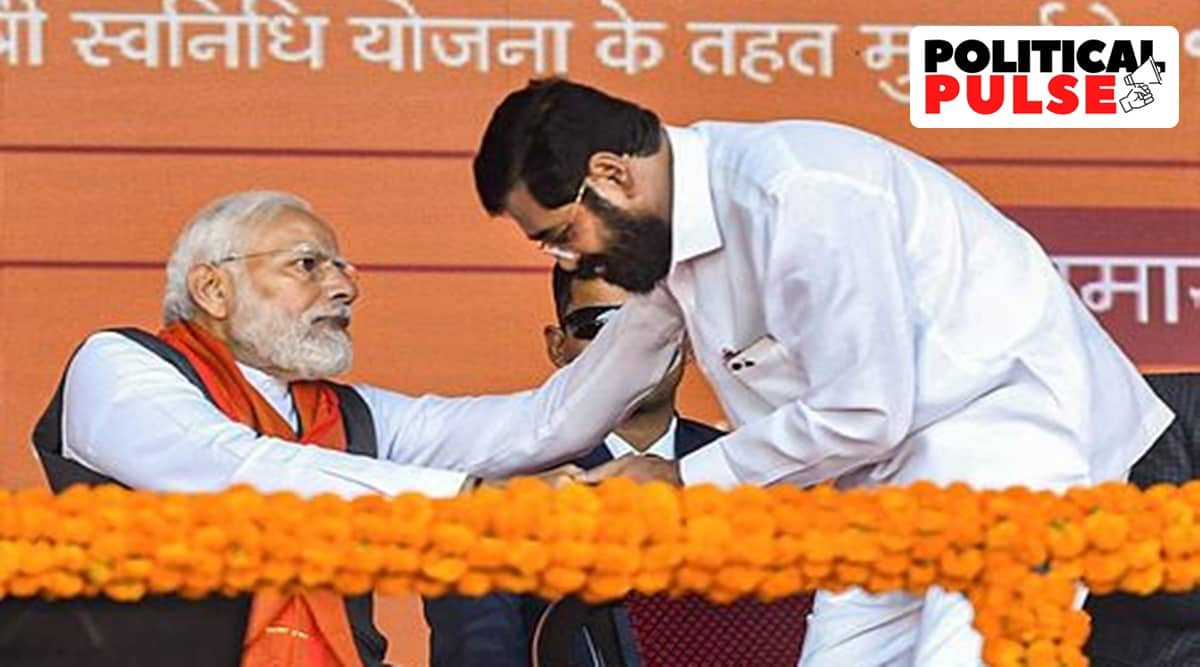 Referring to Modi's generous praise of Shinde and the frequent exchange of smiles and chit-chat while seated on the dais at an event, a senior BJP functionary said, "The PM used both words and body language to make it clear that Shinde is for the BJP a prize catch, and matters to the party." (PTI)
Listen to this article
PM Modi came, he smiled, CM Eknath Shinde conquered
x
00:00
1x 1.5x 1.8x

So, for some days now, what remains a matter of discussion is the warmth shown by Prime Minister Narendra Modi towards the Maharashtra Chief Minister during his recent visit to Mumbai – Modi’s first since the BJP manoeuvred the split in the Sena to form a government with the Shinde faction, six months ago.

Referring to Modi’s generous praise of Shinde and the frequent exchange of smiles and chit-chat while seated on the dais at an event, a senior BJP functionary said, “The PM used both words and body language to make it clear that Shinde is for the BJP a prize catch, and matters to the party.”

Modi’s special efforts to acknowledge Shinde were evident right at the airport when he landed, where he paused next to the CM to pat him on his shoulder. Later, after Shinde had spoken at the event that they addressed, the PM praised him for his speech, and mentioned the CM’s observation about how India was gaining global recognition.

The two were in constant conversation on the stage, as well as when they travelled on the newly launched Metro line together.

Deepak Kesarkar, a Shinde Sena leader and minister, pointed this out: “The PM not once but twice praised the Shinde-Fadnavis government in public!”

The immediate goal of the all-is-well message was obviously the coming BMC polls. The Opposition has been claiming a rift in the alliance, particularly taking digs at Shinde’s “secondary” position to Deputy CM and BJP leader Devendra Fadnavis in the government.

Apart from overtures towards Shinde, the PM came bearing mega infrastructure projects worth Rs 38,900 crore, which were inaugurated by him.

Among those who have been telling Shinde to beware the BJP is Uddhav Sena MP Sanjay Raut. “The Shinde faction will soon know the true colours of the BJP. They never allow allies to grow, they use and throw them,” Raut has said.

The PM’s visit should silence all such critics, Maharashtra BJP chief Chandrashekhar Bawankule said. “The BJP always holds its alliance partners in high regard. We keep our commitment and ensure our partners’ interests,” he said, adding that in 2019, it was the Shiv Sena (then unified and led by Uddhav) that had “betrayed” the BJP and tied up with the Congress and NCP to form the government.

Sources said there was no question of the BJP rocking the alliance with the Shinde Sena, and that Shinde would remain CM till the end of this government’s tenure in 2024.

Among the advantages BJP leaders list are Shinde’s bona fides as a Maratha leader, his hold on his rural base (in Satara, Western Maharashtra) despite most of his politics being in Thane district, and his popularity among the masses.

Sources said Shinde has told the BJP he would leave no stone unturned to return its faith in him – and has set a target for the alliance of 45 of 48 seats in the Lok Sabha from the state, and 200-plus of the 288 seats in the Assembly.