Prime Minister Narendra Modi said Congress has more responsibility to ensure the functioning of Parliament as they had "enjoyed power" for over six decades. 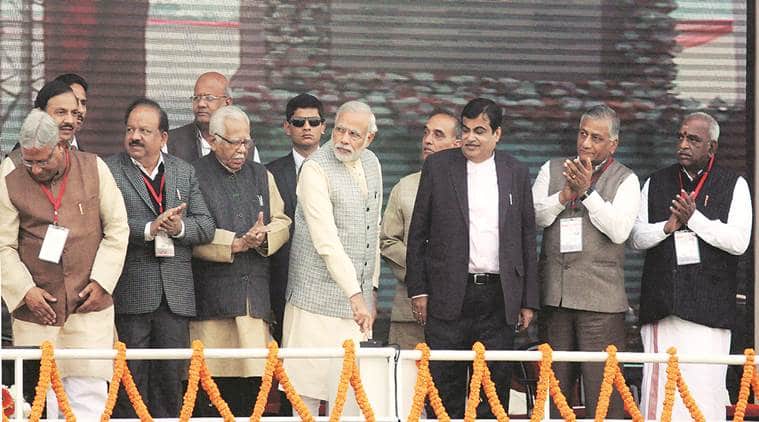 Accusing the Congress of paralysing Parliament, Prime Minister Narendra Modi Thursday appealed to the Opposition to make a new year resolution to let the House function for the development of the country.

“We are trying to take measures for the poor… there are certain archaic laws that need to be changed. But Parliament is not being allowed to function… Tomorrow is January 1. I request them to make a resolution that they will let Parliament function and not pose hurdles for development of the country,” Modi said while laying the foundation stone of a 14-lane Delhi-Dasna-Meerut Expressway in Noida Sector 62.

Taking on “those who have been rejected by the people”, the Prime Minister said political parties should not seize Parliament for their “own political reasons” as it is “our responsibility towards those who have elected us”.

“I am not getting the opportunity to speak in Lok Sabha, so am appealing in the Jan Sabha… those who have ruled for 50-60 years, they know what is the responsibility of Parliament… they have more responsibility,” he said.

In the winter session that just ended, the government could not get key legislation passed, including the goods and services tax bill due to disruption in the House on issues ranging from the National Herald case to alleged irregularities in the Delhi and District Cricket Association which was once headed by Finance Minister Arun Jaitley.

Urging chief ministers to do away with the practice of conducting interviews for Class III and Class IV jobs, Modi said the Centre is implementing the decision from tomorrow as a “New Year gift” for youths of the country. He also urged Uttar Pradesh Chief Minister Akhilesh Yadav to abolish interviews in these categories so that youths of the state get jobs on the basis of merit.

The proposed expressway, which will cost over Rs 7,500 crore, will bring down travel time between Delhi and Meerut to 45 minutes from the current 3-4 hours, paving the way for what he called a “pollution-free future”.

Elaborating on the benefits western UP is likely to reap, the Prime Minister said the highway project will expedite economic development in the region with satellite townships developing along the expressway. Dehradun, he said, will also benefit from the expressway as it will provide fast connectivity without any bottlenecks on NH 24.

The government, Modi said, is working on all-weather roads in Haridwar, Rishikesh, Badrinath, Kedarnath and Yamunotri in Uttarakhand. It is also working on a highway project to reduce travel time between Delhi and Dehradun to about three hours.

Rio Olympics and more in 2016: Mark your dates