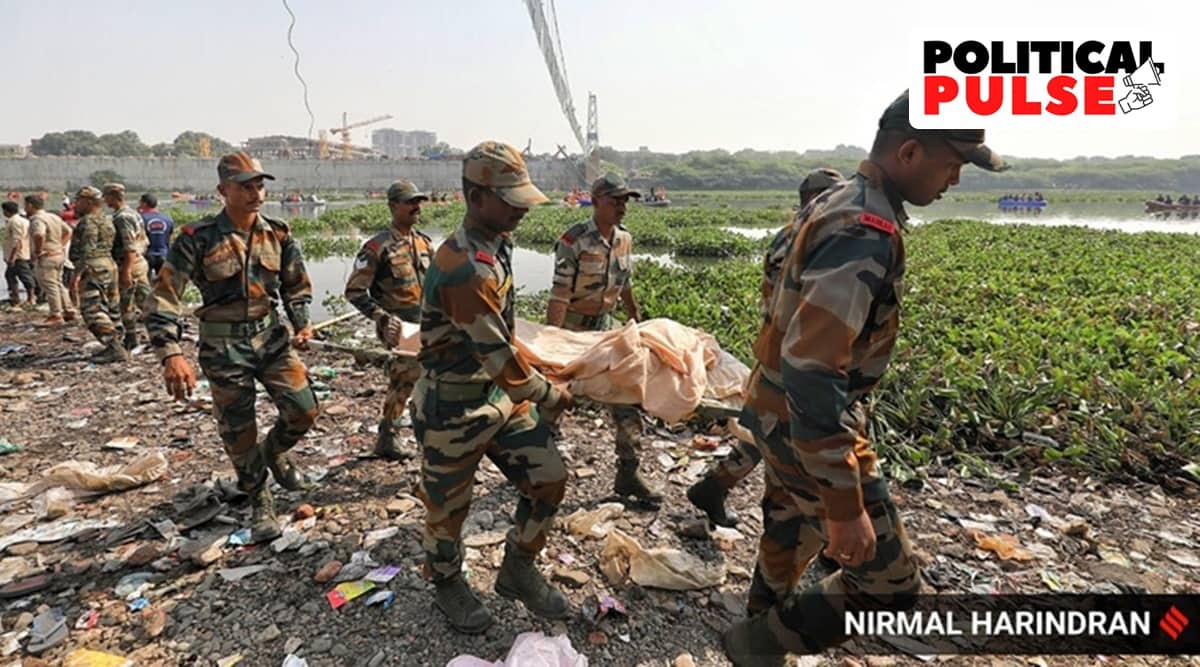 While expressing condolences for the families who lost their dear ones in the Morbi bridge collapse in Gujarat Sunday, the Opposition accused the BJP government of “negligence”and asked if it was an “act of God” or “an act of fraud”, alluding to Prime Minister Narendra Modi’s line of attack against the Mamata Banerjee government in West Bengal when a flyover collapsed in Kolkata on March 31, 2016, killing many.

Among the leaders who tweeted expressing their condolences were Congress president Mallikarjun Kharge and Congress MP Rahul Gandhi, who asked all party workers to “extend all possible help”, and Uddhav Shiv Sena leader Aaditya Thackeray. In an official letter, the Congress has also demanded a “judicial probe” into the “cause of the incident, which prima facie seems to be a case of criminal negligence and gross misgovernance”.

#Watch the CCTV footage of the bridge collapse in Gujarat’s Morbi. Over 200 people have been rescued from the site of the incident, MoS Harsh Sanghvi said Monday. #MorbiBridgeCollapse
Follow live updates: https://t.co/yxhdG5Hw3P pic.twitter.com/d1cKoTSDQw

Attacking the BJP government, Rajya Sabha MP and senior Congress leader Digvijaya Singh, who is in Gujarat for poll campaigning, shared a Twitter thread of bridge collapses compiled by party member Gurdeep Singh Sappal, and said, “Here are some of the examples of BJPMODISHAH regime’s “ACT OF FRAUDS”… All these are because the quality of construction is being compromised for “MONEY” gains as Modi ji explained in Kolkata bridge collapse”.

As I said BJP favoured Contractor’s “Act of Fraud”. Why no action is taken on Officers who are responsible of Quality Control? #MorbiBridgeCollapse https://t.co/74dpnIj7oJ

In a later tweet, he said: “Of course Modi ji should know as CM Gujarat he built up coterie of favoured Civil Contractors who are now taking contracts all over India in BJP ruled States and in GOI?”

Of course Modi ji should know as CM Gujarat he built up coterie of favoured Civil Contractors who are now taking contracts all over India in BJP ruled States and in GOI. #MorbiBridgeCollapse https://t.co/1LofHzOSpL

Youth Congress head Srinivas B V tweeted in Hindi: “In this way, due to the Act of Fraud of the Government of Gujarat, 141+ lives were drowned in the river. Hundreds are injured. Dozens are missing.”

A little later, he shared excerpts from Modi’s speech in Kevadia, Gujarat, on Sunday, to mark Rashtriya Ekta Diwas, coinciding with Sardar Patel’s birth anniversary, and said: “There was a speech of full 27 minutes. The government event continued instead of the condolence meeting… bodies are still missing in the river, 141+ families have been destroyed..! But there is only one principle of Saheb, The Show Must Go On!!”

Rescue work in progress in Morbi on Monday, a day after Jhoolto Pul came crashing down, killing 134 people. (Express photo by Nirmal Harindran)

He added: “The Gujarat government responsible for 141+ deaths is so serious that not even a single officer has been transferred.”

Congress spokesperson Gaurav Pandhi tweeted: “How & why did the cable bridge collapse in Morbi just a week after renovation? Monetary compensation is not going to bring back those who died due to someone else’s negligence and rampant corruption in the Govt… Let us scam crores, if you die, we will give you pennies – BJP.”

Reminds me of the Act of God and Act of fraud speech given by the Prime Minister when a bridge in WB collapsed.
Not sharing the video because of his sheer insensitivity , just as insensitive&careless as this ⬇️⬇️⬇️ https://t.co/YpM5Xfdjpd

Sena MP Priyanka Chaturvedi posted: “Reminds me of the Act of God and Act of fraud speech given by the Prime Minister when a bridge in WB collapsed.”

Congress’s general secretary communications in-charge Jairam Ramesh shared images of the Bharat Jodo Yatris observing two minutes silence in memory of those who died in the Morbi suspension bridge tragedy in Gujarat. At least 134 people were killed after the suspension bridge on the Machchhu river in Gujarat’s Morbi city collapsed on Sunday evening.