Gujarat elections | Above health, housing, education, one concern: ‘Won’t do anything to blemish Modiji’s honour’ 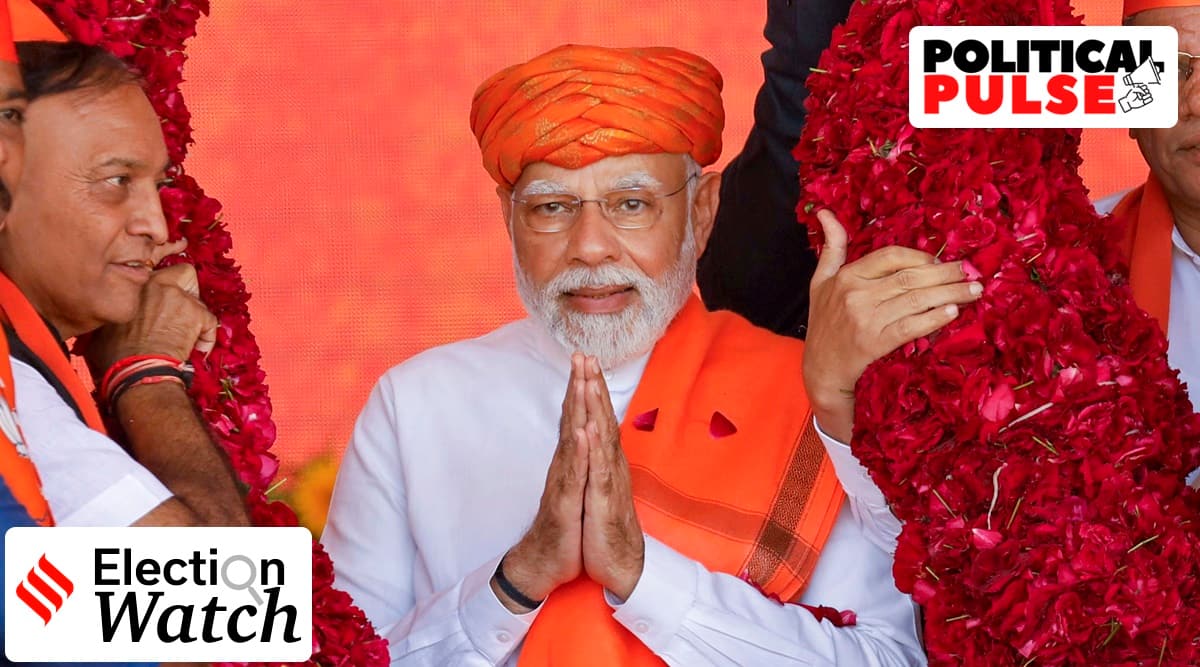 Modi was the CM of Gujarat from 2001 to 2014. Eight years later, as the BJP seeks its seventh consecutive term in the state, it is still his name that blunts the fiercest attacks against the BJP. (PTI)

There is a reason the BJP would not let go Tuesday of Congress president Mallikarjun Kharge’s off-hand remark talking of Narendra Modi and Ravana in the same breath. Nothing works to rally Gujarat voters behind their former chief minister and current Prime Minister as a personal attack on him.

They may be unhappy about housing, education, health facilities, but across the state, the sentiment is common: “Can’t humiliate Modiji.”

Among those who asserts this is Champaben, of village Kathpur. Tucking in her pallu tightly as she gets down to chores, she says: “We do not have a house. Every time we ask for one under the Awas Yojana, the local sarpanch dismisses our plea and helps his cronies. Our village does not have a health centre nor a school for children after class 5… Pan ame Modi saheb nu maan raakshu (But we will not do anything to blemish Modi saheb’s honour).”

The Chaudharys of a small village in the outskirts of Khedbrahma town are much higher on the social spectrum. Located here after displacement due to the Dharoi dam, they wear their affluence from the compensation in the shape of bright saris, gold chains, bangles, heavy earrings — and their “bond” with Modi. “ It will be an insult to Modiji if Gujarat does not support him. We have to strengthen the hands of Modiji,” says Veenaben.

Modi was the CM of Gujarat from 2001 to 2014. Eight years later, as the BJP seeks its seventh consecutive term in the state, it is still his name that blunts the fiercest attacks against the BJP, plugs the chinks in the armour of its state leaders, is expected to carry the weaker candidates past the finish line, and overides the largely muted religious and caste refrains.

In fact, it’s an attack or remark against Modi that has the potential to consolidate voters for or against the BJP. If then Congress president Sonia Gandhi’s “Maut ka Saudagar” barb at Modi in 2007 determined the course of that election to some extent, Mani Shankar Aiyar’s “neech” remark cost the Congress five years later. According to BJP leaders, AAP Gujarat unit president Gopal Italia’s old purported remarks against Modi and his mother this time dampened the “initial excitement” over the party’s surge in the state.

A senior BJP leader involved with the party’s campaign in Gujarat says: “Gujaratis have a very different mindset and approach when it comes to the homeland. There was always a yearning among the people to see a leader from the state of a national stature after Mahatma Gandhiji and Sardar Patel. Modiji realised that, and has worked on it since 2002… Almost all his works and actions have been catering to that sentiment.”

Ravindrabhai Patel, a former bank employee and ex-sarpanch in Gadu Kampa village, was a loyal Congressman till he shifted his loyalties to the BJP in 1995. “It was a mix of the pride in seeing Gujarat at the forefront and the desire to protect Hindu identity and esteem. Everyone here knows what Gujarat today is because of Modiji,” Patel says. “I left as the Congress indulged in factionalism, appeasement politics and played the communal card. The BJP was development-oriented… Gujarat villages started getting water and power under the BJP. Every village is connected with roads. The Gujarat we see today is because of Modiji,” he says.

In Premium |Battlelines in Surat: Modi rules, BJP is The System, AAP registers — as a knock more than actual arrival

Patel claims he was flooded with requests from friends in Rajasthan to persuade Modi to advise the Congress government in the state to introduce a programme like Jyotigram Yojana, a project to ensure 24-hour, three-phase quality power supply for rural areas. His nephew Raghubhai Patel also vouches for the BJP.

Both the Patels believe that the BJP does not have much to worry about when it comes to AAP. “They are trying to make loads of promises. Some tribals (the tribal belt begins from this area of Sabarkantha) may get influenced, but the educated will not trust Arvind Kejriwal,” Raghubhai says, adding that the tribals and a section of the backwards will continue to vote for the Congress.

“Even if Modi does not do anything more, I would vote for him because I cannot let him down,” says Raghu, a 34-year-old farmer with 100 bighas of farmland as well as a dozen cows.

Must Read |BJP fine, but what Gujarat voters want, seek in AAP: ‘A chakachak Opposition’

His neighbour Prabhubhai, 75, is grateful to Modi both for the work he has done in the state as well as lately for the Ayushman Bharat scheme, under which he got financial assistance for the amputation his gangrene-affected right leg needed. He is still in bandages but swears he will vote for Modi on December 5.

For Prabhubhai’s daughter Disha and her husband, Brijesh Chaudhary, who is 24, and a farmer, the most valuable are the steps “Modi has taken for the girl child”. “ I got all the support during my pregnancy,” a beaming Disha says, carrying her daughter Aaradhya, a toddler.

In nearby Prantij constituency, unlike Champaben, her extended family of 20, that does brisk business selling guava and corn from stalls along the highway, talks of dissatisfaction with the state government. “The road to our village is very bad, we have not received any support to build a house. The village sarpanch always favours his own cronies. Our children have to walk several miles to go to the school after Class 5 and we don’t have a health centre,” lists Suresh, Champaben’s brother-in-law. But the fault, the family argues, lies with the local authorities.

If the pro-Modi sentiment is common, so are similar complaints about roads, water, lack of education facilities, and job opportunities, besides rising prices. It is this that makes some of them consider Kejriwal’s promises of welfare measures, despite doubts about how far he can take AAP. The other reason is a desire for “change” after 20-plus years of the BJP.

Interestingly, despite the massive outreach programmes, the repeated directions from the top leadership, as well as the hectic schedule chalked out for state units to reach voters at the ground, many villagers say they have never been approached by local BJP leaders informing them about the welfare initiatives of the Modi government.

“No one comes to us to talk about the schemes. I have not seen any,” Raghubhai says.