Mulayam in name, ‘fauladi’ in spirit, he oversaw the transformation of India’s heartland politics

Along with Lalu Prasad in Bihar, he spearheaded the rise of OBCs; forced BJP too to mould its kamandal politics to accommodate Mandal. 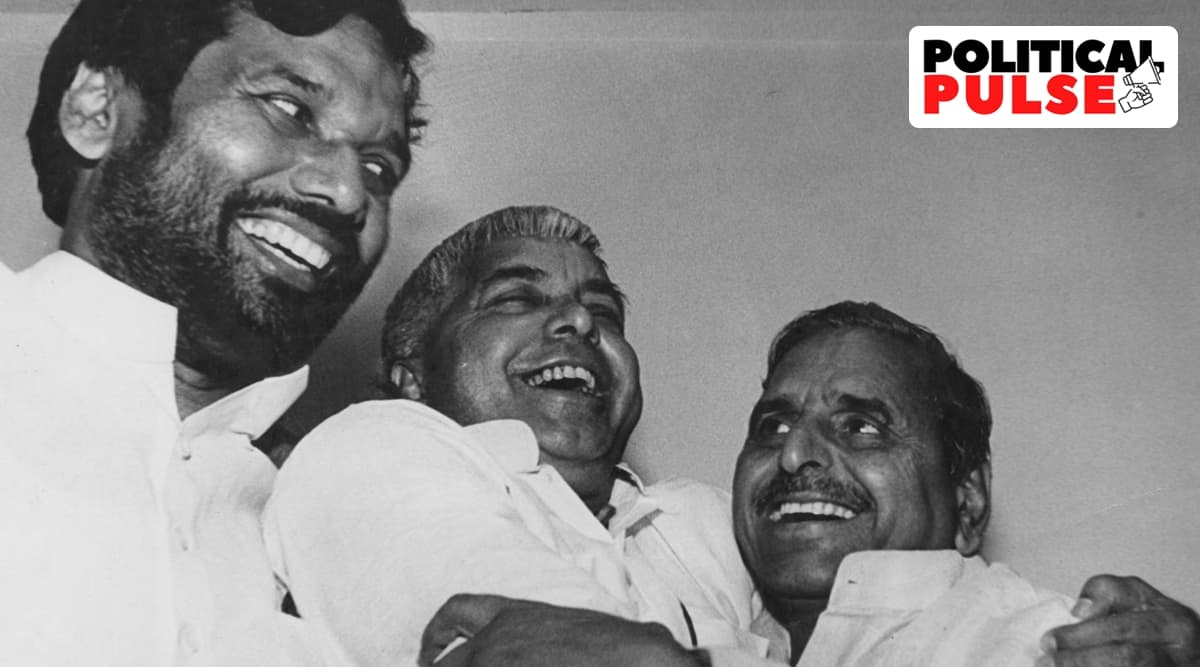 Mulayam was among the crop of first-timers who won that year in the state from communities falling under the category of Other Backward Classes (OBCs), including Kalyan Singh. (Express Archive)

FROM THE time he made the transition from the wrestling arena to the floor of the Uttar Pradesh Assembly in 1967 on the ticket of the Samyukta Socialist Party (SSP), Mulayam Singh Yadav never looked back. He was among the crop of first-timers who won that year in the state from communities falling under the category of Other Backward Classes (OBCs), including Kalyan Singh. If 44 seats were won by the SSP, which brought together the farming communities of the state, 98 were won by the BJP’s precursor Bharatiya Jana Sangh.

The rallying slogan for leaders like Mulayam from the OBC groups was Ram Manohar Lohia’s rousing “Sansopa ne baandhi gaanth, pichhde paawein sau mein saath (the SSP has taken this resolve, OBCs should get 60% of all)”.

Much later, when he became the Chief Minister of Uttar Pradesh on December 5, 1989, Mulayam’s rise ensured that the Congress would never make it back to power in the state. Such was the transition wrought by the politics stirred by the SSP that reins of this politically crucial state have since then largely stayed with leaders who grew up as offshoots of those times – till the BJP swept the state in 2017, and in came Yogi Adityanath.

Mulayam Singh Yadav rose in UP politics in a period of intense social and political ferment after the 1970s, when the OBC movement was gaining strength. (Express file photo by Vishal Srivastav)

Parallel to the churn in UP were the changes in Bihar, where, a decade later, Lalu Prasad and another crop of non-upper caste leaders grew out of a student movement inspired by another socialist leader, Jayaprakash Narayan. Lalu became CM for the first time around the same time as Mulayam – making the transition of the political landscape of the Hindi heartland complete.

If the dominance of the Yadavs under Lalu saw the rise of Nitish in Bihar as the representative of the others among backward classes, in UP, a similar sentiment caused the Dalits to rally behind the BSP. Even now, while the BJP is the single most dominant force in both states, it has achieved so only by careful social engineering, bringing several non-upper caste leaders to the helm of the party organisation and its governments.

Emerging as a socialist leader, Mulayam established himself as an OBC stalwart, capturing a swathe of political space vacated by the Congress. (Express file photo by Vishal Srivastav)

In his initial days though, no one much noticed Mulayam among Lohia’s other stalwart followers. The low-profile Mulayam, with his poor oratory, struggled to stand out among Lohia himself, Charan Singh, Ram Sewak Yadav and others. What he proved adept at was finding the right partners to move on.

After Lohia died in October 1967 at the age of just 57, most of his protégés and support base declared their loyalties to farmer leader Chaudhary Charan Singh, who was a Jat. The latter had defected from the Congress just months earlier to form the Bharatiya Kranti Dal. On April 4, 1967, Charan Singh became the CM of UP, though he could hold the post for less than a year.

Mulayam, who won his seat in the 1967 polls, lost in the mid-term polls of 1969 as an SSP candidate. In 1970, Charan Singh again became the CM, this time backed by the Congress faction headed by Indira Gandhi.

This government lasted 225 days. Before the 1974 polls, Mulayam joined Charan Singh’s party, and grew close to him. When the Janata Party was formed post-Emergency, with Charan Singh one of the main movers behind it, among those he had in his camp was Mulayam.

In the 1977 polls, the Janata Party won and formed the government at the Centre. Charan Singh, who fancied his chances at becoming the prime minister, moved to the Centre. In a shock for Mulayam, he chose his other protégé Ram Naresh Yadav (at the time an MP from Azamgarh) as his replacement for UP politics. Mulayam was sworn in as Minister of Cooperatives, Animal Husbandry and Rural Industries.

But the two Janata Party governments in UP (of Ram Naresh Yadav and then Banarsi Das) lasted three years in total, and in the 1980 elections that returned Indira Gandhi to power, Mulayam was among those who lost. Charan Singh renamed his faction of the Janata Party as the Lok Dal, and Mulayam made it to the House as a Lok Dal MLC.

Between June 1980 and July 1982, the CM of UP was Congress leader V P Singh, a Rajput with a royal legacy. Mulayam saw an opening in the spree of encounter killings of dacoits, mostly from non-upper caste communities, in this period. The Leader of Opposition of the Lok Dal in the Legislative Council, Mulayam compiled a list of 418 people allegedly killed in “fake encounters” across the state and raised the same in the media and in the public.

The three most prominent gangs at the time were headed by a Thakur, a Mallah and a Yadav respectively, but Mulayam’s narrative of the government targeting deprived communities got traction. V P Singh’s allegation that some politicians take help from dacoits of their own castes in the elections didn’t stick, and his government was eventually forced to order a probe into several encounters highlighted by Mulayam.

(The same V P Singh ironically would later re-cast himself as the Messiah of the backward classes, when as prime minister he would implement the Mandal Commission report granting 27% reservation to OBCs in Central government jobs, as well as confer Bhim Rao Ambedkar with Bharat Ratna.)

Even as he mounted pressure on the V P Singh government in UP, Mulayam now showed his true strengths as an organiser and a man who could cultivate friendships with people across castes and communities. While several criticised him for what was seen as dubious flexibility, Mulayam built lasting relationships on this quality.

If leaders of other parties vouch for how he went the extra mile to help friends, his own associates remained with him through thick and thin – till Mulayam himself got sidelined due to age and illness. They include associates such as Janeshwar Mishra, Mohan Singh, Beni Prasad Verma, Azam Khan and many others, some of whom later developed differences with Akhilesh Yadav’s leadership of the party.

After the demise of Charan Singh in 1987, Mulayam rose as the most powerful leader within the Lok Dal. He set out on a campaign across the state against the Congress and against the BJP’s Ram Temple movement. His Kranti Rath Yatra came under attack at many places in 1988.

As V P Singh now rose in national politics as the main challenger to Rajiv Gandhi, leading the Janata Dal, Mulayam merged the Lok Dal with the party.

Charan Singh’s son Ajit Singh tried to put up a challenge, but failed. The popular slogan of the Janata Dal in the 1989 polls was “Naam Mulayam Singh hai, lekin kaam bada fauladi hai (His name means soft, but his deeds are iron clad).”

In October 1990, the BJP withdrew support to the V P Singh government at the Centre as well as from the Janata Dal government in UP. Mulayam turned to Chandra Shekhar, and with the support of the Congress saved his government.

In October 1992, he formed his own Samajwadi Party.

The BJP by this time had learnt to play both the kamandal (temple) and Mandal (caste) politics, and put forth leaders like Kalyan Singh belonging to the Lodh community and Vinay Katiyar, a Kurmi.

What finally sealed the fate of the Congress was Mulayam’s hard stance against the Ram temple movement. Even as the Rajiv Gandhi government vacillated on the issue, the Mulayam government fired upon a group of kar sevaks in Ayodhya gathered at the call of outfits such as the VHP and BJP, to stop them. The Muslim vote left the Congress in bulk for the SP, and that faith in Mulayam’s party has endured to this day.

After the demise of Charan Singh in 1987, Mulayam rose as the most powerful leader within the Lok Dal. (Express photo by Anil Sharma)

As the BSP under Kanshi Ram and Mayawati grew, in 1993, Mulayam managed to forge an alliance with the BSP for the coming Assembly elections — again changing all the established political equations of UP politics. This alliance successfully stopped the BJP from coming to power, and a new slogan was born: “Mile Mulayam, Kanshi Ram, hawa mein ud gaye Jai Shri Ram (Mulayam and Kanshi Ram have come together, where is the Ram temple now).”

However, the much-praised alliance had an acrimonious end when the BSP withdrew following the infamous guest house incident. In June 1995, the BSP did an about turn and came to power with the support of the BJP and Mayawati became UP’s first Dalit CM.

In 1996, Mulayam shifted to the Centre for the first time, and was a Defence Minister in the short-lived United Front government led by H D Deve Gowda and then I K Gujaral. This was the one and only time Mulayam held a post at the Centre.

In the years since, as the BJP caught onto the gains of OBC politics, the SP lost a large chunk of its support base. As it got reduced to a party associated with just the Yadavs, the OBCs moved to the BJP as well as, to a lesser extent, to the BSP.

Mulayam tried to expand his base to Rajputs (Thakurs), roping in Independent MLA Raja Bhaiya and making Amar Singh one of his closest aides.

In mid-2003, after the BSP-BJP alliance collapsed, Mulayam again became CM. In the 2004 Lok Sabha polls that followed, the SP secured 39 Lok Sabha seats – the party’s highest ever tally in the Lok Sabha.

That was the last time Mulayam, by then facing a CBI probe for alleged disproportionate assets, was CM. In 2012, when the SP came to power with a full majority, Mulayam, then 72, passed on the baton to Akhilesh, who took oath as CM in March 2012.

DU Admissions 2022: Last date to register for Delhi University extended; check how to apply through CSAS