Medha Patkar saga: From Narmada anti-dam movement face to fighter for many causes

NBA leader and social activist Medha Patkar has again come in line of BJP's fire, in its current Gujarat polls campaign, for being ‘anti-development’, a charge she rejects. 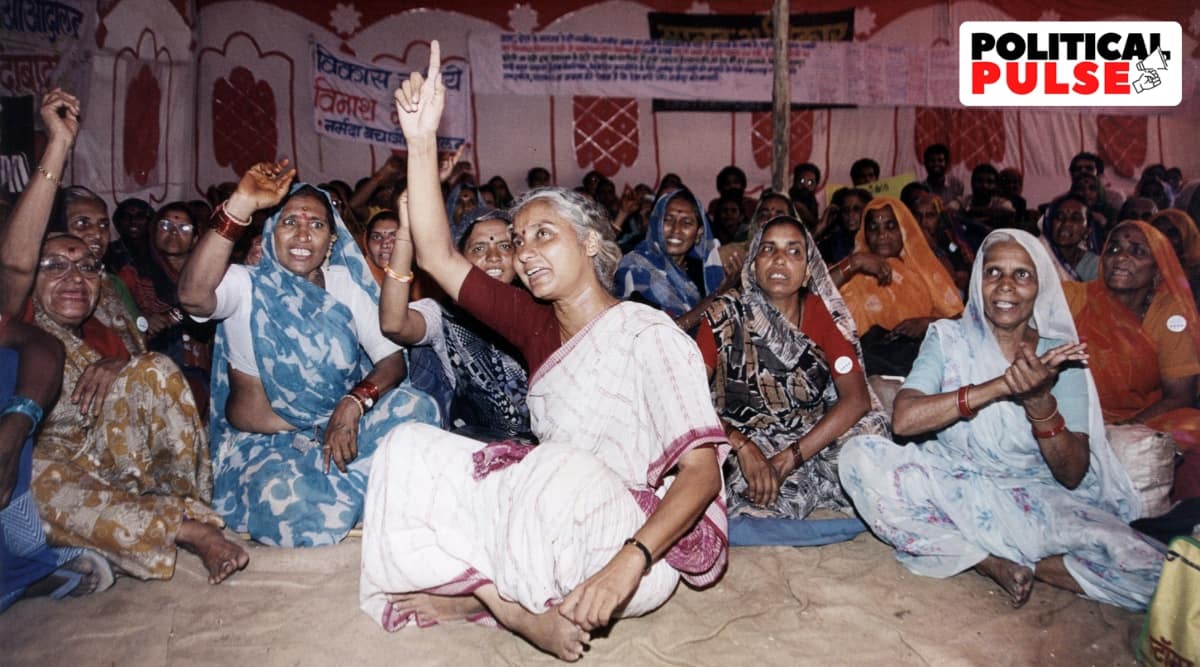 It was in 1985 that Medha Patkar, then just 31, left her PhD midway to jump headlong into the Narmada Bachao Andolan (NBA). Mumbai-born Patkar, the daughter of freedom fighter and labour union leader Vasant Khanolkar, had done her Masters in Social Work from the Tata Institute of Social Sciences and from her early years got involved in several causes involving generally the “oppressed” and poor.

However, it was the Narmada agitation, which grew into a protest against big dams and the right of the displaced to rehabilitation, later spreading to other similar projects, that came to define the activist. It also brought her into direct conflict with the Gujarat government, particularly when it was led by Narendra Modi between 2001-14, with Modi staking the development image of his government on the ambitious Sardar Sarovar dam project.

Patkar’s appearance at Rahul Gandhi’s Bharat Jodo Yatra recently, walking shoulder to shoulder with him, was enough for the BJP to drag the activist into the election slugfest.

Modi, who remains the face of the BJP campaign, Union Home Minister Amit Shah, Chief Minister Bhupendra Patel, have all attacked Patkar during this election, as “anti-Gujarat”, a prime hurdle in the state’s development, and as “urban Naxal”.

The Sardar Sarovar dam project on Narmada river for which Prime Minister Jawaharlal Nehru laid the foundation stone on April 5, 1961, had a full reservoir level (FRL) height of 49.08 metres for harnessing the river for irrigation and power generation in the Narmada basin. In 1965, a higher dam with an FRL of 152.45 metres was recommended by a committee. Madhya Pradesh did not agree to its recommendations, leading to the setting up of the Narmada Water Dispute Tribunal in October 1969.

This tribunal gave its final award in 1979, fixing the FRL at 138.68 metres, as well as the share of the water and hyrdo power between the riparian states — Gujarat, Madhya Pradesh, Rajasthan and Maharashtra. This award was to neither be changed nor reviewed till 2025. The aim of this dam was to provide water for irrigation in at least 15 districts of Gujarat and some parts of Rajasthan and Maharashtra and to share the hydroelectric generated between Gujarat, Maharashtra and Madhya Pradesh. Medha Patkar at an All India Women’s Conference in Kolkata in 2020. (Express file photo by Partha Paul)

The construction of the dam began in 1987, backed by funds from the World Bank. By then, the NBA was already spearheading protests against it. Finally, under immense pressure from anti-dam activists, the World Bank withdrew from the project in 1993. The construction was later halted by the Supreme Court in May 1995.

In February 1998, the work on the dam resumed, with its height then at 88 metres. In 2000, the apex court set a condition of supervised relief and rehabilitation for the dam oustees. By 2004, the FRL had reached 110.64 metres. In March 2006, when Modi was about to complete his first term as CM, clearance was given for raising the dam’s height to 121.92 metres. When the Centre sought a review, Modi sat on a hunger strike for 51 hours.

In 2014, just 17 days after it took over at the Centre, the Modi government gave permission to raise the dam’s height to its maximum and install sluice gates. In July this year, its waters reached its final Kutch end. Medha Patkar at the launch of the “Sutlej Bachao, Punjab Bachao” campaign in Ludhiana. (Express photo by Gurmeet Singh)

While the BJP has always blamed the Congress governments over the years for not releasing funds and hence delaying the Sardar Sarovar Project, under the Modi government, as per figures tabled in the Gujarat Assembly in March 2021, only 64% of the Rs 9,605 crore sought by the state has been released between 2015-16 and 2019-20 for it.

Along with other activists, prominent leaders and academicians, the NBA relentlessly fought against the Gujarat government, starting with Congress CM Chimanbhai Patel, over the Sardar Sarovar Project. Its contention was that the tribals’ displacement from their native habitats caused by big dams and their resettlement elsewhere would leave them devastated.

At its maximum FRL of 138.68 metres, the Sardar Sarovar dam submerged 37,690 hectares — 11,279 hectares of agricultural land, 13,542 hectares of forests and 12,869 hectares of river basin and wasteland. In all, 193 villages of Madhya Pradesh, 33 of Maharashtra and 19 of Gujarat were affected, with additionally 243 villages partly affected in Gujarat.

The NBA demanded proper rehabilitation of 40,000 people who, it said, were displaced by the dam project, particularly tribals across Gujarat, Madhya Pradesh and Maharashtra. 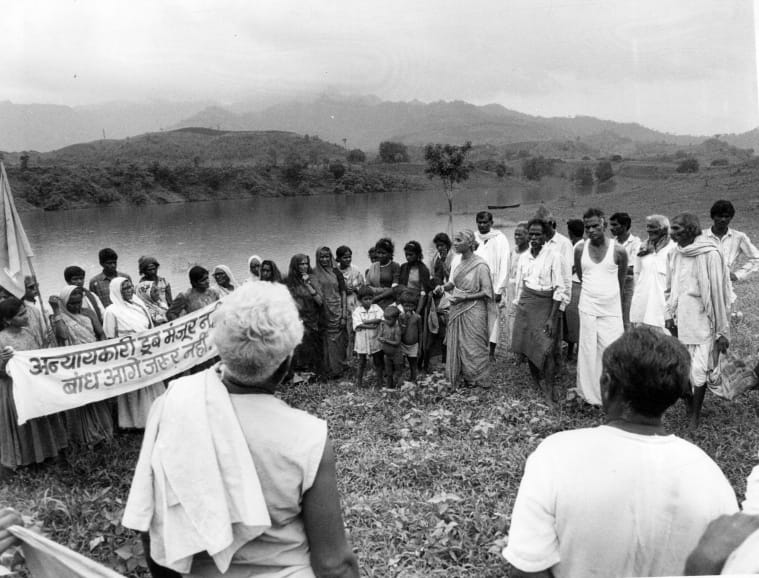 The Patkar-led movement held indefinite fasts, demonstrations and rallies, drawing hundreds of supporters to protests against the Sardar Sarovar dam and other big dams in the Narmada Valley. In the 1980s and 1990s, she also ran foul of the Congress governments in the affected states, with governments accusing her of hampering development.

In the 1980s, as part of the movement, Patkar organised a 36-day solidarity march from Madhya Pradesh to the Sardar Sarovar Project site. Patkar’s agitation, along with protests by locals, forced the World Bank to set up Morse Commission, an independent review of the project, which is said to have concluded that it violated environmental and resettlement policies. The World Bank withdrew funding in 1993.

Her agitation also saw clashes between the NBA members and the authorities, while drawing support from the late Baba Amte, Booker Prize winner Arundhati Roy, film star Aamir Khan, and filmmaker Anand Patwardhan, among others. Bihar Chief Minister Nitish Kumar, too, participated in a protest rally organised by the NBA in 2016.

Patkar undertook many fasts to protest against major dams over the years and also periodically sat on Jal Satyagrahas in the villages that now stand submerged in the Narmada Basin, to oppose oustees’ evacuations. Noted Dalit writer of Maharashtra Arjun Dangle, who closely watched the NBA agitation, said: “Medhatai’s integrity and commitment to the cause of the tribals, oppressed and downtrodden cannot be doubted. She single-mindedly pursued a cause to get justice for the tribals and poor displaced by the dam projects.”

Patkar has always maintained that it is wrong to call her or her organisation “anti-development”, asserting that she only fights for the rights of the tribals and people displaced by various projects and never properly rehabilitated.

Political parties across divides have also often questioned the source of funds to her organisation. Patkar and 11 others were booked in a case of alleged misuse of funds in Barwani district of Madhya Pradesh, which was filed in July this year. They were accused of allegedly misusing around ₹ 13 crore collected in the name of education of tribal children. Patkar rejected the charges as baseless and “politically-motivated”.

Apart from the dam-affected people, Patkar has taken up the cause of slum dwellers in Mumbai under the aegis of Ghar Bachao, Ghar Banao, accusing land sharks and big developers of forcibly evicting them. She has also sued contractors by filing PILs against them. 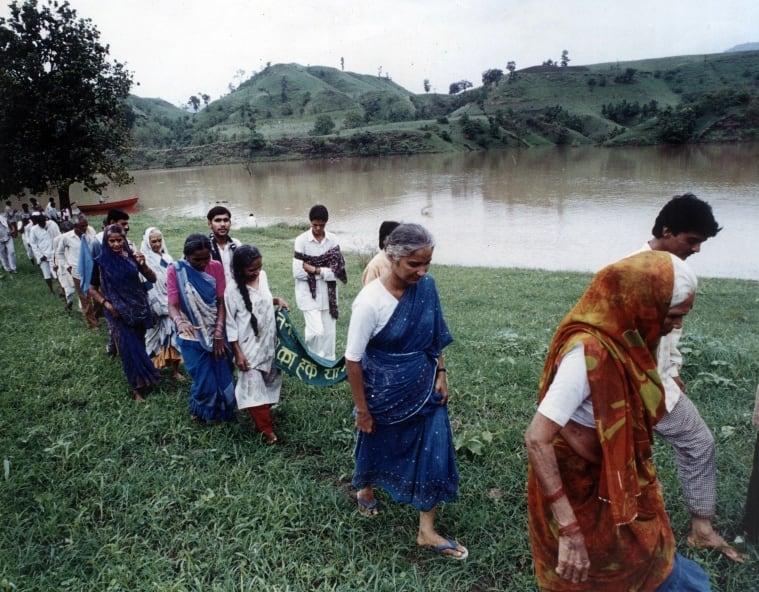 It was largely due to her protests that in 2006, the then Congress-NCP government in Maharashtra brought a new housing policy promising affordable houses and slum redevelopment.

She was also one of the opponents to the hill station project Lavasa City near Pune for allegedly violating environment laws and taking away land of tribals.

In 2007, Patkar for the first time ventured beyond Maharashtra, Madhya Pradesh and Gujarat, and joined the Nandigram agitation in Kolkata. With the Trinamool Congress led by Mamata Banerjee leading the stir, the Tatas eventually relocated the Nano plant for which land had been taken in Nandigram to Gujarat.

Patkar was part of the agitation against land acquisition for the nuclear plant at Srikakulam district in Andhra Pradesh as well.

In March 2022, she questioned the Silverline semi-high speed railway corridor project being built in Kerala by the Pinarayi Vijayan government-led LDF government.

In her late 60s, Patkar is still fighting, raising her voice against the JSW Steel Project in Odisha as recently as June. However, this time, she did not get any support, with villagers driving her away. In July, an FIR was filed against her by one villager in Odisha alleging that the NBA trust had misused funds meant for education of tribals.

Senior CPI leader Prakash Reddy said it was natural for the BJP to attack her. “The party has always sided with the capitalists. Anybody who fights for the poor gets treated badly.”

Patkar has been at the centre of the BJP’s attack in its campaign for the upcoming Gujarat Assembly polls, first to target the Arvind Kejriwal-led Aam Aadmi Party (AAP) for having fielded Patkar in a Lok Sabha election

(in 2014 from Mumbai North East seat, which she lost) and recently, to attack the Congress after she joined Rahul Gandhi’s Yatra during its Maharashtra leg. In his Gujarat poll rallies, PM Modi slammed the Congress over Patkar marching with Rahul, asking voters to punish “Narmada protesters”.