Amid high praise for Sonia as ‘guiding light’, Kharge takes over as new Congress president 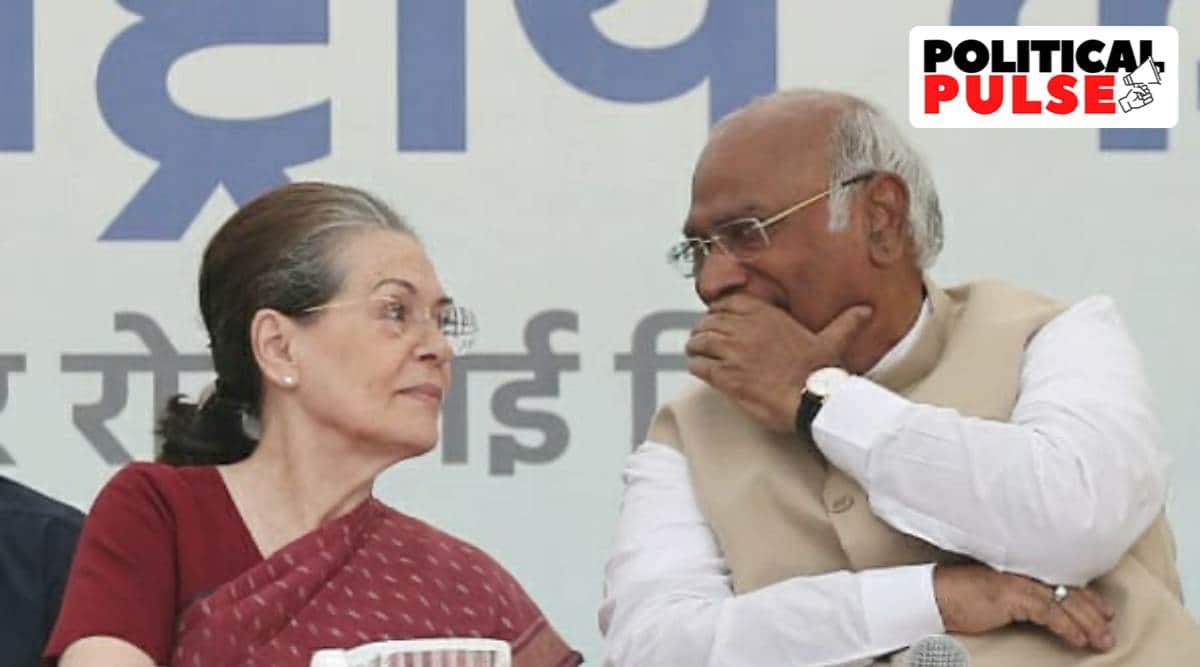 Mallikarjun Kharge on Wednesday formally took over as the new president of the Congress — the first non-Gandhi to assume the party’s top post in two-and-a-half decades — and vowed to fight the BJP and break its “system of lies, hoax and hatred”.

Kharge also said he will implement all decisions taken at the party’s Udaipur conclave, including 50-per cent representation for those below 50 years of age at all levels of the organisation.

Handing over charge to Kharge, Sonia Gandhi said she is confident that he will inspire the party and strengthen it under his stewardship.

The Congress, on its part, lavished praise on Sonia, calling her an “icon of sacrifice”. It passed a “statement of gratitude”, saying the “party and crores of its workers are grateful for her leadership, and that they look forward to her continued affection and guidance”.

As soon as Kharge took over as the new party chief, AICC general secretary (Organisation) K C Venugopal announced that all Congress Working Committee (CWC) members, AICC general secretaries and in-charges of states, have tendered their resignations, ostensibly to enable the new chief to choose his own team.

Hours later, Kharge constituted a steering committee — a constitutional requirement — consisting of all members of the CWC, barring one, to function in place of the top body. The special invitees to CWC were also not included in the steering committee.

Vivek Bansal, who is Congress’s Haryana in-charge, was not included — his role in that position had come under scanner after the party’s candidate, Ajay Maken, lost the Rajya Sabha election from Haryana in June.

The steering committee will decide the date and venue for the next plenary session and oversee preparations for holding the conclave, during which Kharge’s election as Congress president would be ratified and a new CWC will be elected. The plenary is expected to be held in February-March 2023.

Rahul Gandhi had similarly converted the CWC into steering committee in February 2018, two months after he had taken over as president and a month before the plenary session.

On Wednesday, hours after he took over, Kharge also chaired a meeting of the party’s central election committee at the AICC headquarters in Delhi to finalise candidates for Gujarat Assembly elections. Sonia attended the meeting.

Meetings of the election committee used to be generally held at her 10, Janpath residence.

At the function in which Kharge was handed the certificate of Congress president by Madhusudan Mistry, head of the party’s election authority, the party praised Sonia sky high, saying she had set an unique example of “human dignity, simplicity, discharge of duty and discipline”, and “instilled confidence in the ordinary Congress worker to walk on the same bright path in a difficult time”.

The entire top leadership of the party was present at the event, including Shashi Tharoor, Kharge’s challenger in the party president’s election.

“We may miss you as Congress president, but we will never miss you as a guiding light for the party’s future endeavours,” Venugopal said.

Kharge said: “Sonia-ji has been our guiding light. She anchored the Congress party through difficult times, through highs and lows, personifying the values of courage, sacrifice, grace and respect. She will always remain our source of strength as the party gears up for the future challenges.”

Sonia thanked the party and said, “I am very happy today. To tell the truth, I am feeling relieved. The president you have chosen is an experienced leader who is connected to the ground. He has reached this position through dedication and hard work… I am confident he will inspire the party…and the party will be strengthened under his leadership.”

“I’m feeling relieved because of the love and respect you have given me for so long…it is a matter of pride for me, and this feeling will be there in me till my last breath,” she said.

“But that respect was also a big responsibility for me,” Sonia said. “I tried to fulfill it to the best of my ability… Today I’m freed of this responsibility and this weight will be off me and that is why it is natural that I am feeling relieved,” she said.

Sonia said change is a rule of nature and will continue to occur in every sphere of life. She pointed out that there are many challenges before the party, the biggest of which is how to successfully tackle the danger that has arisen to democratic values of the country.

Speaking after Sonia, Kharge said it was an “emotional moment” for him that the son of a worker, who began his political life as an ordinary party worker, has been elected Congress president.

He admitted the party is passing through a difficult phase and that there are attempts to change the country’s democratic system. “Who would have thought that such a phase of politics will come when lies will prevail and those ruling the country will try to weaken democracy. But I know that we will break the system of lies, hatred and hoax… ” he said.

Kharge said there are crores of people who are not formally associated with the Congress but want to save democracy. “As Congress president, I want to tell them: come, let’s walk together,” he said.

Kharge said the Congress has been part of people’s lives for 137 years, but voters are upset with the party “despite its good work and sacrifices of its leaders”. Rahul Gandhi, he said, has understood this and has embarked on a yatra, meeting people and engaging in a dialogue with them.

Taking on the Union government, he said, “What kind of New India is this, where the youth are not getting jobs, farmers are being crushed under jeeps, atrocities against women are on the rise, people are reeling under price rise, but the government is sitting with its eyes closed and helping a few crony capitalist friends? In this New India, hunger is rising, cost of education is rising, pollution is rising. The government is sleeping, but ED and CBI are working 24×7 to suppress the news.”

He said: “In this New India, Dalits, minorities and exploited people are being insulted, and opportunities taken away from them… (Nathuram) Godse is called a patriot and (Mahatma) Gandhi is called a traitor. There are efforts to change Babasaheb’s Constitution and replace it with Sangh’s constitution.”

To make this New India, “they (BJP) want a Congress-mukt Bharat, but Congress will not let this happen”, he said.

Did the Kerala Governor just ‘sack’ the state’s Finance Minister?