With BJP in power in Karnataka, Maharashtra and the Centre, the annual Belagavi border flare-up may be reined in this year 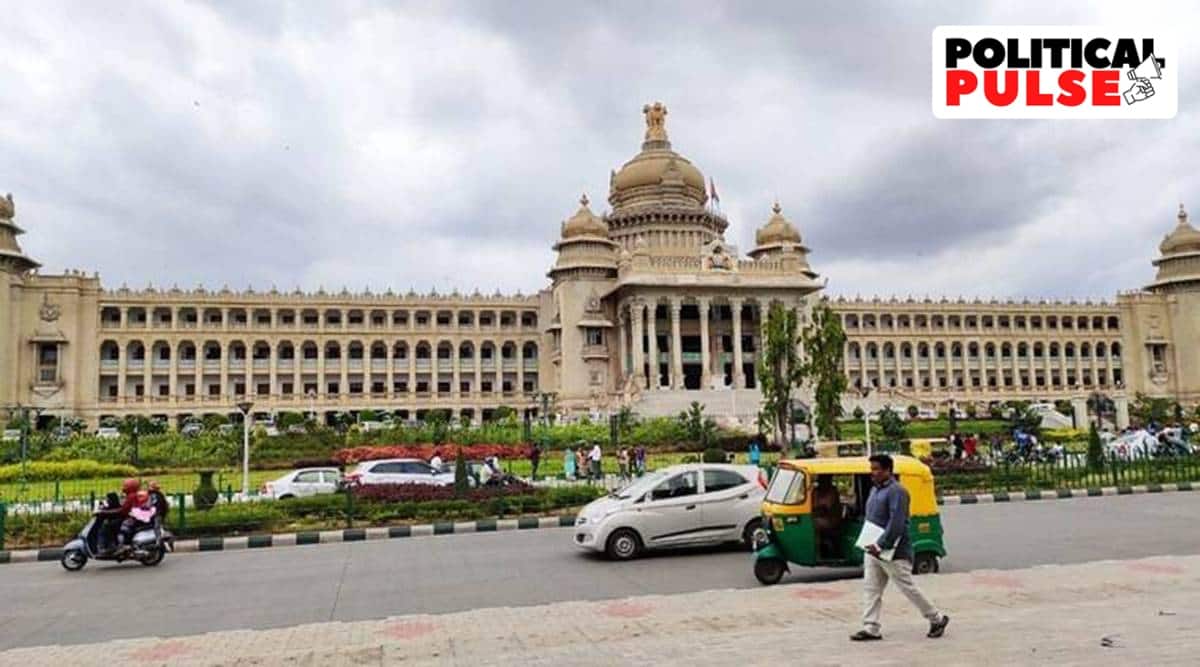 With the winter session of the Karnataka legislature scheduled to begin on December 19, the temperature around the 65-year-old dispute, which has jingoistic reverberations in both Karnataka and Maharashtra, has started to rise again. (File)

An inter-state dispute between Karnataka and Maharashtra dating back to the period of Independence and the reorganisation of states on linguistic lines in 1956, tends to rear its head every December — ahead of the winter session of the Karnataka legislature that is held in the Karnataka city of Belagavi which is claimed by Maharashtra.

With the winter session of the Karnataka legislature scheduled to begin on December 19, the temperature around the 65-year-old dispute, which has jingoistic reverberations in both Karnataka and Maharashtra, has started to rise again.

However, there are signs that parochial emotions will not rule the roost this year in Belagavi — unlike the year 2021 when there were clashes between pro-Maharashtra and pro-Karnataka groups, both before and after the legislative session. At the time Maharashtra was governed by the Maha Vikas Aghadi (MVA) coalition and the BJP ruled in Karnataka.

With the BJP featuring in the Karnataka, Maharashtra, and central governments at present, the possibility of temperatures boiling over regarding the border dispute are remote — given the fact that the regional parties with strongest attachment to parochial issues, like the Shiv Sena in Maharashtra and Maharashtra Ekikaran Samiti in Belagavi, have become weak in recent times.

Karnataka Chief Minister Basavaraj Bommai indicated over there the weekend that levers were being pulled to prevent the border dispute over Belagavi from escalating ahead of the state legislature session on December 19.

Tensions had been building last week with the Supreme Court scheduled to hear a Maharashtra plea on November 30 over a claim on parts of the Belagavi district in Karnataka. In retaliation, pro-Kannada outfits launched a protest in Belagavi on Thursday demanding action against those who allegedly beat up a student after he waved the Karnataka flag during an inter-college festival at a private college in the region. A proposed visit by a delegation of Shiv Sena ministers from Maharashtra on December 3 to some of the disputed areas also raised concerns, with pro-Kannada activists demanding that the state government should refuse to allow the delegation to visit Belagavi and villages in the Belagavi district that are claimed by Maharashtra.

The Maharashtra delegation, comprising Chandrakant Patil, Minister for Higher and Technical Education, Textile Industry and Parliamentary Affairs, and Shambhuraj Desai, Minister for Excise, canceled their visit on Friday, citing an invitation extended by Ambedkarite groups in Belagavi to attend an event for the death anniversary of B R Ambedkar, on December 6.

The delegation was scheduled to visit the Chhatrapati Shivaji Maharaj Garden in Shahpur and a martyrs memorial at Hindalga in the Belagavi district.

The delegation was also slated to visit villages claimed by Maharashtra, meet leaders of the Maharashtra Ekikaran Samiti, and visit families of persons killed in police firing on June 1, 1986, during a protest over making Kannada a compulsory language in schools in Karnataka.

Bommai said the Karnataka government will take steps to preserve the peace in the Belagavi region on the lines of what had been done in the past. In 2021, for example, the BJP government in Karnataka prevented several Shiv Sena leaders from entering Belagavi to stage a protest on the day the Karnataka legislature session was scheduled to begin.

With the weakening of the Maharashtra Ekikaran Samiti – a socio-political party representing the interests of the Marathi population in the Belagavi region – losing its hold in the region after years of dominance the Shiv Sena is seen as attempting to fill the void.

The MES, which was formed with the single-point agenda of unifying the Marathi-speaking villages in Belagavi with Maharashtra (in opposition to the reorganisation of states in 1956) has lost political ground in Belagavi with leaders breaking away.

Since 2012, when the Karnataka legislature sessions began being held in Belagavi, the MES has organised a protest rally called the Maha Melava rally outside the Suvarna Soudha – the venue of the legislature meeting to press for the unification of Belagavi with Maharashtra. Incidentally, the Suvarna Soudha in Belagavi, a replica of the Vidhana Soudha in Bengaluru, was built at a cost of Rs 400 crore by the state of Karnataka to integrate the Belagavi region into the state and quell the challenge of pro-Marathi groups for integration in Maharashtra.

Last year, on December 13, when the winter session of the Karnataka legislature was scheduled to begin in Belagavi, the MES organised a protest rally outside the Suvarna Soudha – without clearances from the district police and authorities. Despite the rejection of permissions to hold the rally, MES activists gathered at the venue and were involved in a confrontation with Kannada activists from the Karnataka Navanirmana Vedike. The pro-Kannada activists threw black ink on the faces of MES leaders Manohar Kinekar and Deepak Dalvi.

The MES called for a Belagavi bandh on December 14, 2021. The bandh call did not evoke much response in Belagavi with the exception of a few Marathi localities in the border city.

A Karnataka flag was however burnt in protests held in Kolhapur in Maharashtra at the time and this issue was raised in the Karnataka legislative assembly by an MLA from the Janata Dal (Secular), M Annadani — who moved a censure motion over the issue.

After this incident, reports emerged of a statue of the Maratha warrior icon Shivaji Maharaj being smeared in a locality in north Bengaluru by pro-Kannada activists. In a reactionary incident, pro-Marathi activists are alleged to have damaged a bust of the Kannada warrior icon Sangolli Rayanna in Angol in south Belagavi on December 17.

A crowd of pro-Marathi activists also gathered near the Sambhaji circle in Belagavi on December 17, following news of the alleged desecration of a Shivaji statue in Bengaluru, with some miscreants throwing stones on Karnataka government vehicles. The incidents of December 17 led to the Belagavi district administration imposing prohibitory orders.

The essential claim of the Maharashtra Ekikaran Samiti and pro-Marathi groups has been that Belagavi is largely a Marathi-speaking region with many parts being exclusively Marathi speaking and that the region should be a part of Maharashtra instead of Karnataka which is a Kannada-speaking state.

The MES and other groups claim that nearly 45 per cent of the district is Marathi speaking, while pro-Kannada groups argue that the Marathi population is only around 35 per cent, which is on a par with the Kannada-speaking population of the region.

At the time of Indian Independence, the region of Belagavi (then Belgaum) was a part of the Bombay Presidency. The MES came into existence in 1948 with the sole aim of pushing for the integration of Belgaum with the state of Maharashtra during the reorganisation of states. The region was however integrated with the state of Mysore (now Karnataka) during the reorganisation of states on linguistic lines.

After the reorganisation, the MES became a political force to reckon with in Belagavi on account of its support among the sizable Marathi population in the region –- which has enabled it to consistently win seats to the Karnataka legislature and even control Belagavi city on occasions. The MES won as many as six seats in the Karnataka Assembly from Belagavi in 1962. In 2018, the MES failed to win a single seat in Belagavi in several decades as its vote base drifted towards the BJP and the party also suffered divisions.

The MES enjoys the support of pro-Marathi political parties in Maharashtra like the Shiv Sena and also the Congress. Chief ministers of Maharashtra have often backed the integration of Belagavi with Maharashtra. The Mahajan Commission, constituted by the Government of India in 1966, had said that some villages of Belagavi can be integrated with Maharashtra, but rejected Maharashtra’s claims on Belagavi city.

In one of the worst incidents of violence over the border dispute, as many as nine people died in 1986 in police firing in Belagavi during agitations backed by political leaders from Maharashtra. The Congress was in power in Maharashtra at the time while the Janata Party was in power in Karnataka.

In 2005, the MES passed a resolution when it was in power in the Belagavi City Council to approach the state and center for the integration of Marathi areas in Belagavi with Maharashtra. The Karnataka government of the Congress and JDS ordered the dissolution of the Belagavi City Council over the move. Kannada activists blackened the face of the MES mayor of Belagavi, Vijay More, over the resolution.

Karnataka governments have passed multiple resolutions endorsing the Mahajan commission report which gave Belagavi to Karnataka – with the exception of around 200 border villages. Political parties in Karnataka including the Congress have frequently demanded a ban on the MES in the state.